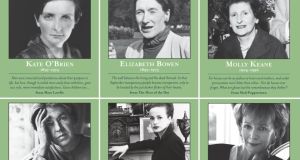 Detail of an Irish Times women writers poster: Surely it has long been time for “the idea of a culture that has not yet come to be in merchandise” to appear prominently. There are more than enough women writers, and they will sell, too

What a pleasure to read, in The History of Modern Irish Women’s Literature, names like Mirjana Rendulic, Neltah Chadamoyo, Mary Anne Wangari Mullen, Brighid Stac, Máire Ní Shéaghdha, Brighid Ní Shíothcháin, Kathleen Legg, Marina Gambold and Nancy Costello. The first three names, those of migrant women writers in Ireland, appear in Anne Mulhall’s essay on “life writing and personal testimony”. The next three names belong to “three Kerry schoolgirls” whose diaries – published between 1917 and 1922 – covered “matchmaking, cutting turf” and domestic service in wealthy English-speaking households; they appear in the essay Writing in Irish, 1900-2013 by Ríona Nic Congáil and Máirín Nic Eoin. The last three names are those of survivors of Magdalene laundries; their narratives, testimonies to their experience in the laundries, are mentioned in Mulhall’s essay.

This excellent collection of essays also includes accounts of literature by more familiar writers – Maria Edgeworth, Lady Gregory, Emily Lawless, Nuala Ní Dhomhnaill, Eiléan Ní Chuilleanáin – but the presence of lesser-known women along with canonical writers shows how the book embodies “the idea of a culture that has not yet come to be in political terms”. That phrase was used in the 1981 manifesto What is Field Day? and many Irish cultural projects have a way of pointing the society forward, as the early Abbey Theatre did with controversial plays by Synge and O’Casey, as Field Day did with Northern Irish theatre, as the Field Day Anthology of Irish Women’s Writing did with its revolutionary inclusion of medical, political and religious texts alongside literary ones, as the Cambridge History of Irish Literature (2006) did with its long chronology and its emphasis on the two national languages, and as this new women’s literary history does with its policy of “generous inclusion”, a phrase borrowed from the earlier Cambridge history.

The wealth of literature accounted for in the book’s 22 essays covers a long span, from Digde’s Lament (also known as The Lament of the Old Woman of Beare), composed c900, to Ebun Akpoveta’s 2013 novel Trapped: Prison Without Walls. Marie-Louise Coolahan’s fascinating essay on Writing before 1700 situates women’s writing in Latin, Irish and English in terms of the literary infrastructures existing in many periods and social contexts. Framing the volume at the other end is Susan Cahill’s essay on Celtic Tiger Fiction, which shows how many of the novels of the period “circulate around traumatic, repressed histories”. True to the book’s synchronic as well as diachronic inclusiveness, Cahill also looks at chick lit and crime fiction.

The series of essays on poetry constitutes one of the best and richest histories of Irish women poets. Speranza gets her due, as Matthew Campbell (in Poetry, 1845-1891) analyses lines from her poems The Famine Year, The Fate of the Lyrist and the dedicatory poem To Ireland from her 1864 Poems. Caroline Norton, whose fame has been kept alive in Joyce’s Araby, is here presented also in the context of Victorian women’s poetic traditions. Lucy Collins’s essay on Poetry, 1920 - 1970 reminds readers that “Literary culture was overwhelmingly masculine” at the time. The essay’s focus on five poets – Mary Devenport O’Neill, Blanaid Salkeld, Sheila Wingfield, Freda Laughton, Rhoda Coghill – should change the way 20th-century Irish poetry is taught and certainly, as Collins says, correct the impression “that there were no women poets of note” writing at that time.

By contrast, Patricia Boyle Haberstroh’s essay on Poetry, 1970-Present has an embarras de richesses to consider, in a long period that continues to be a renaissance for Irish women writers in all genres. Haberstroh devotes attention to the less well-known Eithne Strong, Mary O’Donnell and Anne Le Marquand Hartigan, among others, as well as the better-known Eavan Boland, Eiléan Ní Chuilleanáin, Medbh McGuckian and Paula Meehan. The younger poets, those who began publishing later in the century, include Moya Cannon, Mary O’Malley, Rita Ann Higgins, Vona Groarke and many others. One of the pleasures of the Cambridge history is the ability to see them all as part of a lineage, if not a conscious tradition, beginning with Laitheog Laídeach, Líadain and Gormlaith.

The essays on fiction reveal the ways the Irish novel assimilates and transforms other national influences. James H Murphy’s Fiction, 1845-1900 introduces its discussion with the idea that “The culture of Ireland in the second half of the nineteenth century was caught between Irishness and Britishness,” and Ellen McWilliams’s chapter on Diasporic and Transnational Writing, 1950 - Present looks at the way that “culture of Ireland” mutates in the hyphenated Irish fictions of America, Canada, and Britain. Mary McCarthy and Maeve Brennan thus find their places in Irish women’s literary history as well as Kate O’Brien and Norah Hoult (discussed by Gerardine Meaney) and Edna O’Brien (in Sinéad Mooney’s essay). Elizabeth Bowen might also be described as “caught between Irishness and Britishness” and the essay by Patricia Coughlan devoted to Bowen notes that Bowen referred to herself as “hybrid”. Bowen’s “cultural and spatial disclocations” also include gender and sexuality, especially “the insistent presence of lesbian or proto-lesbian characters” in much of the fiction.

The introduction to this collection points out that previous literary histories of Ireland have “selectively constructed” a canon to “cover or mask” the works that don’t seem to fit a single national narrative. But this history, informed by the visions of newer scholarship, looks at the literature that exists in the “cracks and fissures”. Thus an entire chapter by Tina O’Toole is devoted to the previously uncanonical New Woman Writers (George Egerton, Sarah Grand, Hannah Lunch and LT Meade) who formed “part of an emerging generation of newly literate, empowered” women. The goal of personal independence – “women’s battles for autonomy” – continues in the late 20th century fiction Anne Fogarty discusses, in the work of Olivia Manning, Maura Richards, Maeve Kelly, and others. Strong essays by the two editors, Heather Ingman and Clíona Ó Galllchoir, and by James Kelly, Paige Reynolds, Valerie Coghlan, Eibhear Walshe, Cathy Leeney and Caroline Magennis, make this volume a necessity for anyone who wants to understand the many Irish literary traditions of women writers, an immense body of work that the editors wisely do not try to fit into a single paradigm.

Back in the year 2000 or thereabouts, when Ireland had its second woman president, I rang the business that makes the calendars with Yeats, Wilde, Joyce, Behan, et al, and asked the man who answered the phone why women weren’t included. “This calendar sells,” he told me. Surely it has long been time for “the idea of a culture that has not yet come to be in merchandise” to appear prominently on calendars, tea-towels, magnets, t-shirts, and mugs. There are more than enough women writers, and they will sell, too.

Lucy McDiarmid’s most recent monographs are At Home in the Revolution: what women said and did in 1916 and Poets and the Peacock Dinner: the literary history of a meal