‘To make the inarticulate sing with feeling’: Tom Murphy remembered a year on 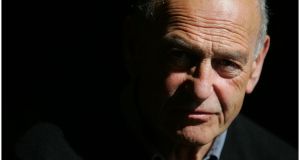 Tom Murphy, who died a year ago today: his plays try to capture the tragic, but also strive for something which goes beyond it. Photograph: Bryan O’Brien

In 1901 a precocious 19-year-old Dubliner wrote a letter to the great Norwegian playwright Henrik Ibsen on the latter’s 73rd birthday. The teenager praises the playwright with a blend of humility and hubris, a desire to appear erudite along with a pleasingly naïve energy to blurt out what he means.

The young man, a University College Dublin student, had written an article on the play When We Dead Awaken and was delighted to have received a favourable remark from Ibsen about it. The praise set his world alight, though he remained self-conscious of his own youthful excitement, writing:

“I am a young, a very young man, and perhaps the telling of such tricks of the nerves will make you smile. But I am sure if you go back along your own life to the time when you were an undergraduate at the University as I am, and if you think what it would have meant to you to have earned a word from one who held so high a place in your esteem as you hold in mine, you will understand my feeling.”

The young man whose feelings have been stirred so animatedly, signs his name: James A. Joyce. The young Joyce strikes a note of martyrdom for his championing of Ibsen, like Stephen in A Portrait who suffers a beating from his classmates for preferring Byron to Tennyson. But the sincerity and admiration Joyce expresses overshadow his showing off:

“I have sounded your name defiantly through a college where it was either unknown or known faintly and darkly. I have claimed for you your rightful place in the history of the drama. I have shown what, as it seemed to me, was your highest excellence – your lofty impersonal power. Your minor claims – your satire, your technique and orchestral harmony – these, too, I advanced. Do not think me a hero-worshipper. I am not so. And when I spoke of you, in debating-societies, and so forth, I enforced attention by no futile ranting.”

I read this letter in Richard Ellmann’s James Joyce biography, shortly after the great playwright Tom Murphy passed away last year. I was struck by how much Joyce’s expressions of admiration evoked the late playwright from Tuam. Murphy’s plays combine the satire and orchestral harmony that Joyce touches on – starting with everyday speech and emotion, then combining words and varying rhythms as if composing a phrase of music. Murphy eloquently captured his own craft when he spoke of his ability “to make the inarticulate sing with feeling”.

Although Joyce’s remarks are prescient, Murphy’s almost operatic take on tragedy is a very different form to the social restraint of Ibsen. But both playwrights touch on a depth of feeling and a shedding of false illusions which marks their high standing in the “history of drama”. Murphy called the collection of three of his greatest plays – Conversations on a Homecoming, The Gigli Concert, and Bailegangaire – “After Tragedy”. These plays try to capture the tragic, but also strive for something which goes beyond it. As Nicholas Grene notes, Murphy refused to accept that the “significant modes of expressiveness of tragic drama are denied to a modern dramatist”.

The characters in Murphy’s plays are “fallen” women, down-and-outs, circus-dwellers, pub-lingerers and returned emigrants more lost than ever. Murphy never shirked away from violence and poverty in his drama – from the toxic masculinity of A Whistle in the Dark to the crushing post-colonial epic Famine. But Murphy also touches on a spiritual poverty which Joyce captures in his letter to Ibsen:

“I did not say how what I could discern dimly of your life was my pride to see, how your battles inspired me – not the obvious material battles but those that were fought and won behind your forehead – how your willful resolution to wrest the secret from life gave me heart.”

Murphy fought many battles behind his forehead. His plays trudge through the Beckettian ditches of an Ireland having its faith shaken. Again, Murphy does not avert his gaze from the destitution and devastation. In Bailegangaire, Mommo, an old woman caught in the throes of senile dementia, tells the same story every night without ever finishing it. But she does, nonetheless, remember the dead, speaking of “the unbaptised an’ stillborn in shoeboxes planted, at the dead hour of night treading softly in the Lisheen to make the regulation hole. Not more, not less than two feet deep. And too fearful of the field, haunted by infants, to speak or to pray. […]leaving their pagan parcels in isolation forever.”

Murphy explicitly and implicitly delves into Ireland’s shame – the Tuam babies, the 12 women a day getting the boat to England, the Magdalene Laundries, the institutionalisation of women’s minds and bodies, the gombeen men, financial gamblers and land grabbers – putting it all firmly and uncomfortably in the spotlight.

There is more than an echo of Harold Pinter’s famous summary of Samuel Beckett here, “He is the most courageous, remorseless writer going and the more he grinds my nose in the shit the more I am grateful to him. […]He brings forth a body of beauty. His work is beautiful.”

Unlike Beckett, Murphy found ways amidst all the pain and sorrow to express brief glimpses of hope. In Bailegangaire the possibility of another child is transposed from just another burden to suffer, to the possibility, if not the confirmation, of a better future and another chance. This is not the hope of cathartic redemption, but after so much death and misery, a quiet optimism that another life might be possible. Conversations also ends on an unlikely note of affirmation, as Anne smiles “her gentle hope out at the night”.

Joyce closes his letter, “Your work on earth draws to a close and you are near the silence. It is growing dark for you. Many write of such things, but they do not know.” He also claims, “We always keep the dearest things to ourselves”.

Given the profound kindness and generosity seen in Murphy’s plays – hard-fought for after so much darkness – as well as the tributes and anecdotes which poured out after his death, expressing the same sentiments in the man, we might consider that there are times when the dearest things are shared.

Tom Murphy died a year ago, on May 15th, 2018.
Liam Harrison is a PhD candidate at the University of Birmingham, researching the legacies of modernism in contemporary literature