Labelling literature and getting on with it: Banshee journal publishes its first book 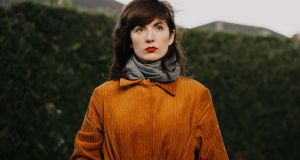 Lucy Sweeney Byrne: her writing is “experimental and gorgeous and gritty and sexy and clever”. Photograph: Savo Photography

The human brain likes labels. It likes categories, and neat little boxes, and ways of making sense of the world around it. It delights in the thrill of some; resents or resists others that feel reductive, dismissive, insulting. We are all so much more complicated and infinitely fascinating than any collection of labels could ever capture. For writers, and artists, and other creators, we hope that our work is too.

“We’re letting the men in, right?” I can’t remember if this was an actual conversation or not, but if it did happen, there was a “yeah, of course” murmur of agreement and then we moved on to more important things. It was late 2014, and myself, Laura Jane Cassidy and Eimear Ryan were compiling submissions guidelines for Banshee, our new literary journal. ‘’

We were – still are, I hope – young but not naïve; by that point in our late twenties both Laura and I had been through the publication process with YA novels, while Eimear had editorial and design experience in addition to being an award-winning short story writer. Between the three of us we had selected and judged and critiqued and mentored and taught; there’d also been several conversations, over the years, in that hypothetical way, about setting up our own publishing house. Like many grand plans, it was understood that this wasn’t actually ever going to happen.

Except then somehow it did. We stopped talking, started doing. Looking back, it was a time when several new enterprises were springing up – but literary periodicals have always come and gone. Titles can vanish after a single issue. Looking back, we were in the right place at the right time to start something new, particularly with three women at the helm; conversations around the heavily-male-dominated arts world had kicked off. But as three writers who love stories and words and have strong opinions about both, we were less calculated and more – lucky.

“Are men allowed to submit to you guys?” Variations of this query came in soon after we had publicly announced our plan – early 2015. It was the one thing we hadn’t expected (we knew, of course, that we would get endless “Dear Sirs” into our inbox). Perhaps it was the name (even though women never wonder if eligible to submit to things with “man” in them). Or maybe it was the three female editors. But we had avoided using the term feminist to describe the journal (not that such a label would inherently exclude male writers) – not because we aren’t feminists but because it seemed to prioritise the polemical over the beautiful, the didactic over the literary.

But the human brain likes labels. So we are the literary journal that is likely to be mentioned in close proximity to the word feminist, or female or women, that may be described, for example, as “the wayward daughter of current Irish literary reviews” (Helena Mulkerns in The Irish Arts Review). You could get grumpy about this for not focusing on other dimensions (or worry about the male contributors, though they seem to be coping just fine). Or you could get on with it.

We use labels ourselves at Banshee, in a shared inbox, to indicate our thoughts on submissions. The bright colours are sometimes at odds with what the labels signify – the all-too-common rejection of a piece that might be skillfully executed but just not a fit for the publication (something that feels like a brush-off to writers until you leap over to this side of the desk). They’re the easiest way of indicating our approval of a piece, too – but sometimes we’ll add a comment, just for emphasis.

“This is bloody brilliant.” That was in response to a story we received for our very first issue, by a writer named Lucy Sweeney Byrne. We got a lot of “bloody brilliant” work into our inbox for that first issue, I hasten to add, but many of the names were familiar even if the writers were working in new-to-them forms (Sinéad Gleeson, Jessica Traynor, Deirdre Sullivan, Eleanor Hooker). It was experimental and gorgeous and gritty and sexy and clever. It was unbelievably confident. It appears on pages 25-32 of our first issue and is the first story of hers in print, and we were unsurprised when later work she sent us proved to be just as thrilling. (It was similarly unsurprising to watch her work appear in other journals or for her to receive bursaries, as time went on.)

From the very earliest stages of Banshee, books formed part of the plan. We were in no immediate rush – editing and producing a journal twice a year on top of other work kept us busy – but we had thoughts. Suggestions. A GoogleDoc or two. Lucy’s name was at the top of our list, although we hadn’t discussed this with her at all. Just around the time it might have been a good idea to drop her a line, have a chat about potential ideas, an email arrived from her. She was wondering if we’d ever thought about publishing a book . . .

This is the part that sounds like a happy ending. But the stories that make up Paris Syndrome are the result of years of work – and that was before we got our editorial mitts on them, as well as (in some ways more importantly) the overall structure of the book. How exactly to fit these pieces together – these kaleidoscopic tales of different Lucys, who are sometimes like but are not the author, who pull us down various paths in various places, who experience the pleasures and dangers of being a young woman in today’s world?

Both Lucy and her fictional alter egos are tricky to label. This is both brilliant – a sign of finding a complex, nuanced writer to work with on this first step of ours – and frustrating. As a tiny new publisher, you yearn to somehow transcend this sordid business of putting books into neat little categories, while at the same time acknowledging that sharp, witty, lyrical and devastating may be accurate descriptions of the stories in this book but do not reflect how bookshops are arranged.

I’m conscious that labels like Irish, young and woman may end up as a more useful signpost for potential readers, broad though they are. Time again to get on with it. The human brain likes labels. For books, they are tools to nudge readers a little bit closer to picking up and appreciating something they might love. And I do think – hope – believe – that readers will love Paris Syndrome, and the talent evident on each and every page.
Paris Syndrome by Lucy Sweeney Byrne will be published by Banshee Press in September. Review copies are available upon request: bansheelit@gmail.com