Faber & Faber: The Untold Story – What do publishers actually do all day?

Review: A fasctinating history of the independent publisher, told by an insider 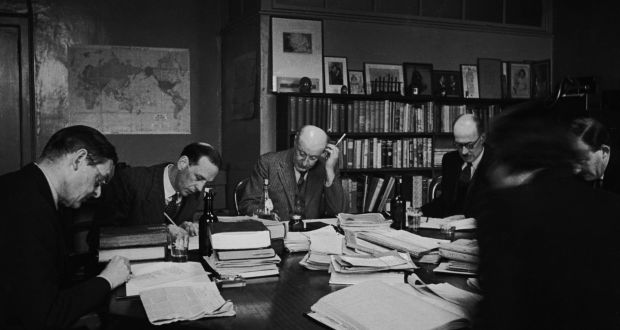 A meeting of the board of directors at publishing house Faber & Faber in 1944 to discuss how best to use their paper ration. Photograph: Getty Images

It was a roll call of publishing houses swallowed up by a conglomerate that was later swallowed by another conglomerate. This is no criticism of Penguin who adapted to economic circumstances to continue to publish excellent books. Publishers have survived through amalgamations for decades, resulting in a diminishing pool of gatekeepers for new authors to get past.

This makes the story of independent publisher, Faber & Faber, all the more fascinating. Toby Faber is the grandson of Geoffrey Faber who founded the firm in 1924, despite reservations by his mother, reluctant to see a family trust risked on a perilous enterprise.

This book is subtitled “The Untold Story” as against “The Full Story”. A full history would need to be written by someone more impartial than a former managing editor whose family owns 50 per cent of the shares: the remainder owned by a trust established by T S Eliot’s widow. This shareholding allows it to retain its independence, although as this book makes clear, dire economic circumstances often meant that it came close to being swallowed up.

For someone writing both a family history and a publishing one, Tony Faber deals fairly with the personalities, conflicts, failures and courageous decisions that shaped the firm. His format is fascinating. The book primarily consists of extracts from letters and memos composed on the run, snap literary judgements jotted down while its staff juggled the fraught financial intricacies of keeping the firm solvent.

The remaining text is a commentary to contextualise a story that begins when Geoffrey Faber commenced a fraught partnership with Sir Maurice and Lady Gwyer, owners of the Scientific Press, whose primary income came from a magazine called The Nursing Mirror. The new firm, originally named Faber & Gwyer, aimed to build both literary and medical backlists.

Geoffrey Faber’s talent was as a recruiter of talent, quick to act in 1924 when alert by a friend to a potential new editor – an American poet (but “strongly anti-American, as you would suppose”) working for Lloyds (“so you may take it that he has been trained in business”) who “is obscure and allusive, but I have faith that he will come out of his obscurity and write something really fine”.

I love the notion of someone regarding T S Eliot – a decade after The Love Song of J Alfred Prufrock – as someone who might one day “write something really fine”. But such snap observations work brilliantly in bringing us into the mind-set of the period.

Geoffrey Faber’s second recruit was Richard de le Mare – son of the poet, Walter – chosen because he “seems to have plenty of practical ability (as the sons of mystical poets very often do!)”. With Eliot and de le Mare building a literary list, Geoffrey pondered a possible new magazine, aimed at the 150,000 women employed as nannies. This would have “a clear and definite policy… to raise the status and encourage the professional sense of children’s nurses, provided that nothing is done or said to disturb the equanimity of mistresses”.

By 1929 the fractious Gwyers were bought out and the firm, rebranded as Faber & Faber, enjoying its first commercial success with Siegfried Sassoon’s Memoirs of a Fox-Hunting Man, published anonymously. That same year Eliot juggled the difficulties of publishing an edition of Ulysses (his caution won out, with Bodley Head taking the risk) with cultivating “a boy named Auden… I think he has some merit”.

We glimpse a succession of major Faber poets from Stephen Spender in 1930 (“the lad needs and deserves encouragement”) to Seamus Heaney in 1965 (“not quite strong enough for publication, but… does indeed show definite promise”).

Not all decisions are wise. We see Eliot reject George Orwell’s Down and Out in Paris and London (“decidedly too short… and seems to me too loosely constructed”). Even when accepting a future bestseller like Who Moved the Stone in 1929, Eliot’s financial caution was apparent: “I suggest of course no advance and modest royalties.”

He could have never believed that his children’s verse, reluctantly dragged from him by Geoffrey Faber, would help to save the firm, when reimagined as the musical “Cats”. But one pleasure of this book is how these men (few female voices are heard), slowly growing old along (de le Mere needs to be ousted in 1970) rarely have time to consider how posterity will judge their decisions. They are too caught up with wartime paper shortages, bombs falling on Mrs Faber’s garage, battles with censorship (culminating in discussions about how many “fucks” John McGahern can use in “The Barracks”) and keeping the show on the road. Filled with brilliant cameos, this is for anyone who wonders what publishers actually do all day.