The meaning of home and its place in the NI conflict 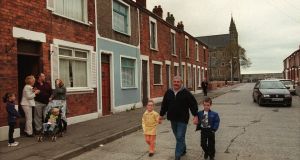 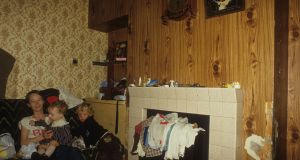 Commemorations of the past in Northern Ireland are often centred on public space; stories and identities are stamped into the landscape through murals, memorials and parades. These practices are frequently used by communities as focal points for solidarity, sometimes in the face of historic injustices that continue to be unaddressed by the British state.

But public memorials can leave gaps and may privilege certain public – often male – identities at the expense of others. Various commentators have pointed out, for example, how few public memorials exist in Northern Ireland which memorialise women hunger strikers, or women combatants and activists during the Troubles more generally. Private, individual memories of conflict – of pain, loss, trauma, physical or emotional struggle – also fit uneasily into this landscape of public memory, especially if they took place within the home, “behind closed doors”, and contradict or threaten the story a particular group tells about itself.

The tension between individual and group narratives will always exist to some extent in such public displays but the gaps left by these commemorative practices deserve to be explored. Where do they come from? And can these gaps be filled?

Some of these difficulties can be explained by the “two traditions” approach to conflict resolution in Northern Ireland, which is much in evidence in the Belfast Agreement. This approach puts the Northern Irish conflict on the plane of cultural struggle; it takes both nationalism and unionism to be equally valid expressions of this and has informed much of the way the conflict and its aftermath have been framed since the agreement was signed in 1998.

The achievement in bringing peace to Northern Ireland was of course enormous and the result of huge amounts of work by all involved parties; there are currently those in the British establishment who would seek to undermine all of this to pave the way for their longed-for hard Brexit, and the agreement should be robustly defended in the face of this. But there are issues which it and subsequent agreements have not dealt with, as we can see quite clearly from various political crises over the years, most recently the failure of talks prompted by the DUP’s refusal to sign up to an Irish Language Act.

Responding to this failure, SDLP leader Colum Eastwood commented: “The spirit which underpins the Good Friday agreement is one that recognises we have two communities here, two nationalities, two sets of allegiances and we have to have that recognised in anything that goes after this.”

Eastwood is clearly using the terms of the agreement to drive home the importance of the Irish language, but the problems with this statement are, to me, fairly apparent. Are there not more than two communities, two nationalities and two sets of allegiances in Northern Ireland? Should political leaders not be trying to move the debates about language and culture beyond these narrow and conservative definitions of Northern Irish society?

Such approaches also gesture towards a dangerous idea of community and tradition which risks divorcing them from politics, power and historical context. As Rosemary Sales argues in her study of gender and sectarianism in Northern Ireland, “emphasis on parity of esteem for the ‘two traditions’ presents a static and ahistorical view of the two communities – one which can imply that anything claimed as ‘traditional’ is worthy of respect”.

This imposes a rigid framework on experiences of the Troubles, and can make a fetish of certain militaristic, male-dominated and conservative traditions and ideologies. The continued emphasis on the two communities, as well as obscuring the role of the British state, can work to exclude identities that do not fit neatly into Catholic-Protestant or nationalist-unionist dualities.

It also fails to address the complex positions women may occupy within these dualities.

This isn’t to disregard tradition and community altogether, it’s to look at how they work and to explore the other experiences and identities that exist within and across communities, as well as outside of them. And focusing on domestic spaces is one way to do this.

Within collective memory of the Troubles in Northern Ireland, the home and the relationships associated with it are often seen as separate to the conflict, a space apart from the “real” action.

My research, however, posits domestic spaces as an integral part of the conflict; I am largely using fictional writing to do this but I am also drawing on the work done by the Women’s Resource and Development Agency to highlight women’s experiences of the conflict and academics such as Claire Pierson. She argues that “gender neutral” peacebuilding ignores crucial women’s issues such as domestic violence and reproductive rights.

An emphasis on the home as an inherently political space in Northern Ireland opens up discussions about gender, class and inequality that there is often no room for in the high-profile jousting between the major political parties. During the conflict, the home was politicised in very specific ways. The academic Adam Hanna reminds us of the census-driven calculations on which the creation of the majority Protestant state were based and points out that this “made each house a unit that either underwrote or called into question the existence of the polity”.

The civil rights movement of the late 1960s was, of course, formed partly in response to the gerrymandering and anti-Catholic housing policy of the Northern Irish state. And as the state and its security forces responded with violence – and the political struggles themselves became more militarised – houses, streets and neighbourhoods became physically implicated in the conflict; homes were the site of invasion by security services, of paramilitary murders, places in which weapons were stored and people went into hiding.

Homes also became spaces of activism and of resistance, through the squatting of empty houses and flats, or barricades constructed to prevent army and police access.

But more than this, and far less visibly, homes were (and continue to be) a site of physical and emotional labour; of feeding and caring for people, of political awakenings, of supporting politically active family members, of the daily psychological toll of simply living day-to-day in a war zone.

The language of “dealing with the past”, “moving on” and “a fresh start” used in the Belfast Agreement and subsequent agreements can sometimes obscure the emotional work all of these things require. The work of grieving, of processing the past, of negotiating feelings of sadness, worry or anger, dealing with disagreement and ambivalence – these are all essential parts of living through conflict and its aftermath and so much of this takes place inside the home.

When we insert these experiences into conversations about the history of conflict in Northern Ireland it gives us access to different ways of thinking about both the past and the future here and enables us to ask important questions about what counts as tradition, community and history.

Eli Davies is a PhD researcher at Ulster University, exploring the relationship between gender, memory and literature and the Troubles. She completed an M.Phil in Irish Literature at Trinity College Dublin in 2003 and between then and 2016 worked part-time as an adult education teacher and writer and editor. She is co-editor of ‘Under My Thumb; Songs That Hate Women and The Women Who Love Them’, an anthology of women’s music writing published by Repeater.