The back bedrooms, squalid alleyways and grimy white vans of sinister Dublin

The truth of modern life is stripped, hosed down, and laid on a slab in June Caldwell’s ‘Room Little Darker’ 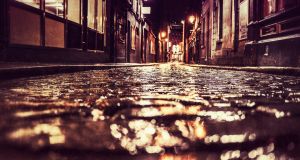 The writing in June Caldwell’s Room Little Darker is exquisite in its detail but there is little for Fáilte Ireland to mine from its pages. Photograph: iStock

In Room Little Darker, June Caldwell’s debut collection of short stories, the truth of modern life is stripped, hosed down, and laid on a slab. There is nowhere to hide. The prose is black and sooty and fearless and craving. The stories come at you and leave you slapped.

Here is writing that is shocking in its absolute realness. You are with Caldwell at every step, although you might be watching through fingers. While parts of it can be an uncomfortable read, other parts of it made me want to punch the air identifying wholly with her fury at modern society, with her roar.

In an interview, Caldwell said that “after spending years in journalism and being restricted in what you could say and how you could say it, I firmly believe that fiction can be more effective, more politicised”.

Certainly, her voice is effective and put to good use. It stalks the streets of her home city, crying and shouting while she fires bottles at walls. Caldwell’s love/hate relationship with Dublin and Ireland is almost Joycean in its flavour, in its tangle.

Room Little Darker rips through the country, its eye close and unswerving. The writing is exquisite in its detail but there is little for Fáilte Ireland to mine from its pages.

The land of these stories is ugly and squalid. It’s all back bedrooms and alleyways and grimy white vans on sinister Dublin streets. Shite pubs and Friday nights by taxi lights. Not for her the hokery of woollen caps and ballads sung with eyes closed. Homes are squalid flats and debased rural farmhouses and tormented suburban semi-Ds.

Dubstopia sizzles along – “Come out of charity, come dance with me in Ireland, that c**t Yeats said in the book by their mattress. But he didn’t know f**k all about the skank or fiddlers like Carol, all thumbs and kettledrums, sucking off ghosts at the window in the Old Bank on Doyle’s Corner.’

Caldwell demands that you listen, that you are roused from your stupor. Nothing is spared. The 11 stories are snapshots of this wretched world we live in. And yet. And yet. For all this, there is a slow and honest beauty that winds through the collection. An honesty that is so stark and human it might well break your heart.

In the opening story Upcycle: An Account of Some Strange Happenings on Botanic Road, an abusive father haunts his daughter in the family home.

“It may have been the dead baby, lifeless in a Clarks’ shoe box on the bedroom floor, that had the final say. Or it may have been nothing peculiar at all. Missed promotion in work, boredom, a stray urge. But sometime in his thirties, he left himself and us behind. Yet we continued to love him despite the emotional violence, the daily drudge, the drinking, the incessant arguing, the drab awful iron-clad impossibility of it all. As you’d expect towards a father or a husband by a certain societal proxy. A hangover from Victorian times, maybe. We loved him because it was required of us. We battled hard to understand why he was always in such intense pain, why he needed to pass on some of that pain so readily to us.”

Caldwell’s understanding of suffering and her delicate attentiveness to the human condition mean that she is not entirely without mercy.

Children and babies and death and the elderly riot through this story, pointing as they go. A child finds a baby in a plastic bag down a lane behind a convent. “Billie stumbled across the bag in 1981, opening it up without really understanding what she was looking at. Though a tiny bloodless hand was enough to send her rocketing. I guess this was how young women got rid of unwanted evidence back then. It wouldn’t happen now with advances in DNA, with advances in social conscience.”

Any seeming advances in social conscience are dealt a blow later in the collection. In Somat, a brain-dead woman is kept alive as an incubator for the foetus inside her. Medics, lawyers and the Church fight over the woman, her family side-lined. The consultant acknowledges that the right to life is complex “without being sure exactly. Sometimes that’s how complex complexity is”. His mind wanders, turning to his own daughter and to golf. ‘There is so much tediousness and yet nothing more to do here. He takes his own blood pressure.’

Room Little Darker is inventive, graphic and alarming. But it’s also a strikingly adept study of our dark island and who we are. All this and it’s funny too. Hilarious sometimes. (“This town is gone rough as a nun’s moustache.”)

Recently Caldwell said: “We expect justice in life, appeasement, release from hard situations. It often doesn’t arrive, it doesn’t grace our doorstep. Life tells us, ‘You picked this shit, deal with it, smell it, stick it right up your nose’.’’

Bedtime reading? Probably not. A masterpiece? Most definitely.

Stick it right up your nose.