The Irish working-class and their place in the literary canon 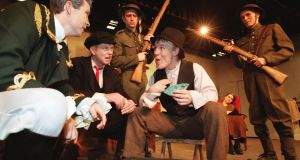 Members of the Mountjoy Prison Community during a dress rehersal of of Sean O’Casey’s The Plough and the Stars. File photograph: Alan Betson/The Irish Times

PG Wodehouse’s great creation Bertie Wooster may have oversimplified matters when subdividing the English social class system into three neat types: “Toffs, Lower Middles and Tough Eggs”. Similarly Bono slightly overcomplicated matters in once remarking that, when growing up in a middle-class enclave which rechristened itself Glasnevin north to linguistically segregate itself from Ballymun, if he went for a half-hour walk the streets he passed through could change social class a half-dozen times.

As someone who grew up one social class further inland, I know he was exaggerating: you could only change social class four times in half an hour. But his point was correct. In Ireland class division is entrenched, pervasive and more multilayered than Bertie Wooster ever imagined: even if his servant Jeeves could have wised him up.

These divisions are underlined in a barbed comic moment during O’Casey’s The Plough and the Stars, when amid the shooting and looting a strange apparition tentatively approaches the slum dwellers on the tenement steps. It’s a bewildered middle-class woman, adrift in a foreign country, who plaintively begs them to show her the way home to “Wrathmines”.

O’Casey’s early trilogy is so central to the canon of 20th-century Irish literature that an outsider might imagine that the working-class experiences he depicts are pivotal strands running through Irish drama. But many playwrights since him faced the dilemma that even when their actors on stage portrayed the realities of working-class life (in plays as diverse as Billy Roche’s A Handful of Stars and Christina Reid’s Tea in a China Cup, the majority of audiences in most mainstream theatres still predominantly hailed from areas like Wrathmines. And they were inclined to view such characters through a sentimental prism of nostalgia, more as colourful characters (in the sense of oddities) rather than as people who share the same everyday dilemmas as them.

Garry Hynes tried to break this cosy distancing by confronting the audience at one Abbey production of The Plough with a shaven-headed cast dressed in white, with results more laudable in ambition than theatrically successful.

But one of the numerous joys of this first comprehensive examination of representations of Irish working-class life in literature is that Michael Pierse, in his insightful introduction, delves into productions that positioned themselves far from mainstream venues in an effort to reach a non-theatre-going public, often enjoying successful runs that went unnoticed except to the new audience they reached. One example is Heno Magee’s restaging of his dark 1972 play, Hatchet, in the Embankment Pub in Tallaght a decade after it first shocked mainstream audiences.

As a young Dubliner in the 1970s it’s hard to overstress the impact of Hatchet and also of Brian MacLochlainn’s radical, ground-breaking television drama, A Week in the Life of Martin Cluxton.

I became aware of Lee Dunne; the importance of James McKenna’s The Scatterin’ (expertly analysed here by Vic Merriman); the towering achievement of James Plunkett’s Strumpet City (whose popularity seemed to make critics sniffy towards it); the works of Paul Smith (even then being quietly forgotten); and also Maura Laverty, who may not seem a radical writer now, but once taunted a Catholic mob by singing The Red Flag from an upstairs window in the Gate Theatre, when they were baying for Orson Welles’s blood after he attended a performance there of her classic play Tolka Row in 1951.

But I encountered these works in isolation, with no sense of a tradition or continuity behind them. This is why Pierse’s critical exploration is a major achievement in bringing together a host of scholars to place such works in the broader context of a tradition of working people finding ways to be heard. This tradition stretches back to cheaply printed 18th-century ballad sheets which – as John Moulden explores here – were coveted by the poor and viewed as seditious by the rich. It continued with the 19th-century Ulster Weaver poets, whose work is examined by Frank Ferguson.

So much of the Irish experience – especially the unwritten experience – occurred outside Ireland and Pierse shrewdly casts his net outwards. Margaret Hallissy and John Lutz explore themes of solidarity and struggle in Irish-American working-class literature, Peter Kuch examines the Irish experience in Australia and Tony Murray considers the testimonies of Irish nurses in Britain, both when crafted into fiction, like Maeve Kelly’s fine Florrie’s Girls, and in first-hand accounts sometimes posthumously published, like Mary Morris’s diary of being a nurse during the second World War, which lay untouched in the Imperial War Museum archives until published in 2014.

Heather Laird also considers portrayals of working-class Irish women and explores women’s dual struggle in plays such as Frank McGuinness’s fine debut, The Factory Girls (1982) or Tracy Ryan’s 2010 play Strike, where female protagonists not only have to fight employers for proper conditions but face a second battle not to be patronised by trade union officials.

This book contains interesting re-evaluations of well-known figures like Behan and O’Casey by John Brannigan and Vic Merriman expertly reassesses Billy Roche’s superb Wexford Trilogy in the context of his characters’ class affiliations and their consequences. But its chief joy lay in the discovery of voices new to me, like the Belfast poet and shipyard worker Thomas Carnduff whose poems chart the political evolution of a man who grew to consider the emancipation of all workers as being more vital than the Orange tradition which indelibly shaped him.

Maybe many voices drifted out of sight for the reason that Claire Lynch identifies as behind some of the critical responses to Sean O’Casey’s memoirs which some 1960s Irish reviewers viewed “as guidebooks for class voyeurism” which, whatever their merits, “do not know their place”. Pierse’s colossal undertaking restores a lot of these voices and narratives to their rightful context within Ireland’s literature.

Perhaps a computer program is responsible for many strange anomalies in the index. The author of James X appears as “Flann, Mannix” under F and as “Mannix, Flynn” under M; “Billy Roche” appears just below another entry for “Billy Roache”; the present reviewer is credited with a work named Clondike Suit, which is news to me. Even Santa Claus gets listed, which is odd as he appears under S instead of C. And because I always considered him the William Martin Murphy of the North Pole and the elves as working-class heroes.

It may seem sniffy to highlight numerous indexing errors, but they seem less excusable in a scholarly volume from a major publisher at a price beyond the range of many of Wodehouse’s “Lower Middles”, never mind the “Tough Eggs”.

Dermot Bolger’s latest novel is The Linely Sea and Sky