‘As a gay man, escaping the North was a matter of life and death’

‘Smilin’ Through’ the Troubles: ‘Growing up in a house ruled by bigoted matriarch meant home-life was just as much a warzone’ 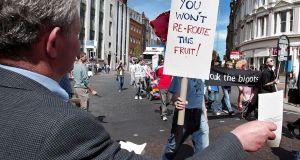 In April 1998 when Tony Blair and Bertie Ahern were signing the Good Friday agreement at Castle Buildings, I was just coming to the end of a degree in Creative Writing and Theatre Studies at Liverpool John Moore’s University. As a young, gay, Northern Irish man from a staunchly loyalist background, I had willingly left the armoured vehicles and the red, white and blue pavements behind for a more peaceful life in England.

For me as for lots of other young, Northern Irish people who grew up during the Troubles, getting out was an existential necessity. As a gay man it was even more a matter of life and death. Staying would have meant the subjugation of my sexuality and desire, the negation of my identity.

Growing up in a household ruled by a homophobic, bigoted matriarch who had pictures of the Reverend Ian Paisley mounted on her walls, also meant that my home-life was just as much a warzone as the one outside, and I desperately needed to escape.

From the age of about twelve to seventeen, daily battles with my Ma felt no less as terrifying and bloody as the tit for tat battles taking place in the rest of The Province. I remember clearly the “screaming matches” we used to have during the time of the Anglo-Irish Agreement (AIA) and the Ulster Says No protests. I thought the AIA was a step in the right direction; an opportunity for dialogue with all sides concerned. Ma thought it was one step closer to a united Ireland and the erosion of her Protestant identity.

When I used to challenge her about this Protestant identity, highlighting the fact she never set foot in a church or appeared to have any Christian values, she’d retort that she was a Protestant politically not religiously! You could never win with my mother.

I was compelled to respond to the political situation

The one thing I did care about, though, was peace. I wanted the killings and the pain to stop. So, when the agreement was mooted I was full of hope. Here was a real chance of peace, and I wanted it to work out.

Ma, of course, like the DUP, was against it. The very mention of the word “peace” would cause her to fly into a rage, barking like a rabid dog about us Protestants being sold down the river Lagan and into the South, and how we’d soon be controlled by Rome. She hated the idea of the Republic having any say in the future of Northern Ireland; not even the Nineteenth Amendment that rescinded the Republic’s irredentist claim on Northern Ireland could appease her.

The negative responses of the DUP and my mother infuriated me and for the first time in my life I was compelled to respond to the political situation. Making use of my three years study of theatre and creative writing, I decided to write a play. Inspired by Queer Theory and Judith Butler’s idea of “queering” I was going to take the situation in Northern Ireland and turn it into a queer farce.

It was going to be outrageous and provocative; it was going to subvert the usual macho, heterosexual Troubles narrative that always focused on paramilitarism; it was going to be personal, a way to come to terms with my mother and my upbringing; and, most importantly, it was going to end on a hopeful note of reconciliation and peace to reflect the tangible hope that I, and many others, felt in April 1998.

I set about writing the play. My mother became Peggy Morrow and I was her son, Kyle. When Kyle comes out to Peggy, on the eve of the Good Friday agreement, she demands he leave the house. Instead Kyle barricades himself into his bedroom and goes on hunger strike until she changes her mind and accepts him for what he is.

I even had a singing Canadian Mountie who appeared to Peggy in fantasy sequences and is the one who helps her see the error of her ways. This character was based on one of my mother’s favourite Hollywood stars from the 30s and 40s, Nelson Eddy. To me, it was the perfect way to represent the former US Senator George Mitchell who was mediating the peace talks at Stormont.

Ironically, like the road to peace, the road to production of the play was long, and there were many hiccups and milestones on the way. In 2002, three years after it was written, it won the Writing Out award for best new gay play, organised by Finborough Theatre London, and then in 2004 it won Contact Theatre’s Flip the Script slam.

This led to John McGrath of Contact commissioning the play and finally co-producing it in 2005 with Birmingham Repertory Theatre. Although the play was produced almost seven years after the Good Friday agreement it was still relevant because peace in Northern Ireland at that point remained tenuous; the IRA’s decommissioning of its weapons wasn’t fully achieved until September 2005 and the devolved government at Stormont had been suspended because the unionists lacked the trust needed to enter the power-sharing Executive. My play, with its happy ending where Peggy and Kyle are reunited in a rendition of Smilin’ Through, one of my mother’s favourite songs, offered some much needed positivity.

On the opening night at the Birmingham Rep, I sat at the back of the auditorium and cried as the audience responded with riotous laughter and rapturous applause. I didn’t cry because I felt proud or relieved that it had finally been produced. I cried for Peggy and Kyle, for me and my mother. I cried for all those who had suffered in the years preceding the Good Friday agreement. And I cried for Northern Ireland, its past and its future.

Billy Cowan is senior lecturer in creative writing at Edge Hill University. Smilin’ Through went on to be nominated for best new play at the Manchester Evening News theatre awards 2005. It is published by Playdead Press.