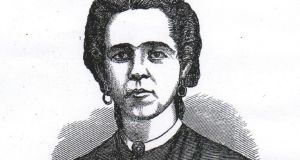 Ellen O’Mahony, a teacher, set up the Fenian Sisterhood in the US, which ran balls and picnics to publicise and raise funds

This year marks two important milestones in women’s struggle for equality. Although restricted to those over 30 years of age, women became entitled to vote in general elections in February 1918. Later the same year, they could also run for parliament, when Constance Markievicz was the first to be elected as a Sinn Féin MP, but abstained from taking her seat.

Determined campaigners for female suffrage like Millicent Garrett Fawcett, the first woman to be honoured with a statue in Parliament Square, London, last month, were pioneers during an era which idealised middle-class women as home-based. Many contemporaries lacked interest in the suffrage question, but eager to engage in philanthropy, had to conform to the Catholic hierarchy’s strictures. Some women demonstrating political skills during the 1860s were Irish separatists.

As the country recovered after the catastrophe of the Great Famine, a radical minority refused to accept Ireland’s role within the British Empire, pointing to continuing depopulation and inequality. The Irish Republican Brotherhood, founded by James Stephens and John O’Mahony in 1858, and its American auxiliary, the Fenian Brotherhood, aimed to revive nationalist self-confidence, proposing independence as the solution to Ireland’s problems. The Fenians hoped to bring about a rising by stealthily enrolling conspirators, who would be supported by an armed expedition from the US to establish a republic. While the Fenians of the 1860s became a transatlantic mass movement, highlighting Irish issues, any hope of success depended on the British Empire fighting in a major war, which failed to materialise.

Dublin Castle struck in September 1865 to arrest the leadership, followed by the detention of hundreds of suspects during 1866. The Rising in March 1867 was defeated. That the Fenian movement survived to regroup, eventually staging the 1916 Rising, is largely due to the determination of its forgotten female supporters.

In line with contemporary thinking, the IRB did not admit women members, but trusted them as couriers, to provide safe houses and even to direct the IRB at times. James Stephens after his sensational escape from Richmond Bridewell, for instance, was offered conference facilities by Mrs Butler, a fashionable dressmaker in Kildare Street, Dublin, whose upper-class clients deserted her when the news leaked.

In the US, Ellen O’Mahony, a teacher, set up the Fenian Sisterhood, which ran balls and picnics to publicise and raise funds. Branches held weekly meetings. Copying aristocratic patronesses, the Buffalo Sisterhood presented a silk flag to its male counterparts, which would see action during the Fenian invasion of Canada. When a descent on Ireland seemed likely, the sisters sold Fenian bonds, redeemable after independence. The Catholic hierarchy was horrified by Irishwomen venturing into politics, afraid they would lose their traditional “purity” when co-operating with the men. The Fenian sisters, mostly working class, were derided as dupes in the American press, but probably motivated by memories of Famine suffering.

In Ireland, the lower middle- and working-class origins of the Fenians meant abandoning them would herald the demise of the IRB. Prominent relatives, eg, Ellen O’Leary, poet and sister of John O’Leary, the future mentor of WB Yeats, Catherine Mulcahy, an early supporter, Mary Jane, a published poet and the third wife of the redoubtable Jeremiah O’Donovan Rossa, and Letitia Luby, the daughter of a Young Ireland poet, married to Thomas Clarke Luby, second in command of the IRB, formed a Ladies’ Committee. They publicised the prisoners’ cause in the press, highlighting their idealistic motives and appealing to all women’s Christian charity to aid the prisoners’ helpless dependents.

The Ladies’ Committee provided meals for untried prisoners, arranged legal representation and helped families with weekly payments. When a husband’s release was conditional on emigrating, funds were advanced. Hundreds of women set up local committees and collected funds throughout the Irish diaspora. For many this was their first political involvement. But money remained inadequate, as the Ladies’ Committee depended on working-class donations. Ellen O’Leary and Mary Jane O’Donovan Rossa were devout Catholics, who observed the middle-class decorum befitting “ladies”. Mary Jane was shocked by a female supporter in Clonakilty, who had briefly appeared in her nightdress during a political protest. The ladies accepted that women in politics should restrict themselves to encouraging and facilitating their men folk. Joining the men on the barricades was never contemplated.

But women could express their views through poetry and Ellen O’Leary published verses in a daring, masculine tone to highlight contemporary grievances in the Dublin Fenian newspaper, the Irish People. Fanny Parnell, Charles Stewart Parnell’s sister and later a Ladies’ Land League activist, followed suit. The numbers of Irish prostitutes in Britain and North America were not deemed a public topic for contemporary women. The Irish People attributed these social problems to the Famine and mass emigration. A lively debate, including female correspondents, ensued. Mary Jane O’Donovan’s poem The Bridge deals with this subject in a sympathetic, moving manner.

The London Times was impressed by work of the Ladies’ Committee, characterising Irishwomen as hitherto having fought alongside their men with a stone in the foot of a stocking. The new organisation’s “prospectus is ingeniously written”, the Times concluded and could prove successful. Dublin Castle ultimately refrained from arresting Mrs Luby, Miss O’Leary and Mrs O’Donovan Rossa, although aware of their pivotal role between 1865-1867, for it feared a public outcry. It was “ticklish” meddling with “ladies”, according to Lord Wodehouse, the viceroy. The Ladies’ Committee was wound up after the first Fenian amnesty of 1869, when its members withdrew from public life. While always an auxiliary to the men’s organisation, by appearing in the press and on American platforms, they furthered women’s political and social engagement. Some used their apparent insignificance as females to hoodwink the authorities in facilitating the escape of suspects.

Working-class women were determined enforcers of a community code, which forbade testifying in court. They attacked informers until restrained by police with revolvers

There are also glimpses of working-class women throughout Ireland, who registered their protest against the status quo in a forthright manner. Albina Mahony, a young dressmaker, who had been held and searched without privacy during a Fenian trial in Cork, threatened the constabulary with exposure in the transatlantic press and won damages for unlawful imprisonment. The police did not hesitate to arrest Mrs Buckley, wife of a printer and long-standing Fenian and landlady of an American Fenian officer. She had continued to conspire even after her menfolk went on the run.

As John Mallon, an outstanding police commissioner, warned, in a poor country like Ireland a great deal of information could be bought for a £5 note. Defeated conspirators were in danger from comrades “peaching” to gain a new life in the colonies. Working-class women were determined enforcers of a community code, which forbade testifying in court. They were often to the fore like enraged Amazons, attacking informers until restrained by police with revolvers. Although lacking educational opportunities, they left their men and their neighbours in little doubt where their sympathies lay.

Soldiers of Liberty: A Study of Fenianism, 1858-1908 is published by Lilliput Press

Caoilinn Hughes: ‘The patriarch is still at large’ in Irish society
Real news has value SUBSCRIBE