Irish history, hot off the press 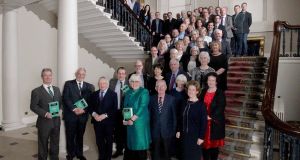 There has been a proliferation in high-quality publications on Irish history in recent decades and the seemingly endless appetite for more was demonstrated by the high turnout for a panel discussion by the editors of the new landmark four-volume Cambridge History of Ireland. Held at the Trinity Long Room Hub Arts and Humanities Research Institute yesterday afternoon, in advance of the official launch by President Higgins at Dublin Castle later that evening, the panel discussion was livestreamed to 850 viewers around the world and trended on Twitter.

The moderator was Caitriona Crowe, of the Royal Irish Academy, who has played súch a major role in preserving the history of Ireland for research and analysis. She congratulated the editors and contributors on this “mammoth enterprise” and especially on the fact that they had avoided “pre-publication hype [and] brought it to the general public as a wonderful surprise, fully formed and ready to divulge its riches, a treasure not confined to academia”. She highlighted the two remarkable and new aspects of all four volumes as the emergence of new material and the importance of digitised sources.

Liz Friend Smith, the commissioning editor at Cambridge University Press, explained that they were well aware of the high level of interest in Irish history publications, having published Thomas Bartlett’s bestselling Ireland: a History in 2010. It seemed the right time to once again tackle Irish history on a larger scale, given that there had been no comprehensive study since the monumental nine-volume New History of Ireland published by Oxford University Press between 1976-2006. Bartlett agreed to act as overall editor, as well as editor of Volume IV (dealing with 1880 to the present) and began assembling a team of editors and contributors.

The fact that the team brought the four volumes to publication in just four years was, said Friend Smith, a remarkable feat, especially given that as well as a “magisterial and authoritative history in the traditional sense…it is also an Irish history with a twist… delivering an original and new take on Irish history from many perspectives, making it genuinely accessible to a wider audience”.

For Bartlett, this appeal to a wide, general readership was an essential aim, to the extent that he issued only one direction to his three co-editors in selecting the contributors for their volumes: “people who could write clearly, lucidly and with verve, style and imagination”. This, he said, has become ever more a priority to him over the course of a long career in history, because dull writing by historians – and especially Irish historians – is unforgiveable.

The exponential growth in publications on Irish history was, in fact, one of the principal reasons Bartlett agreed to undertake the new History of Ireland. “Publications on Irish history have proliferated over the past 40 years. As a result, we are seriously in danger of not being able to see the wood for the trees. This makes a need for a new synthesis all the more pressing, and that is what the Cambridge History of Ireland aims to provide.”

Prof Bartlett also pointed to the fact that the 1976-2006 New History of Ireland was very much of its time in many ways, another reason for a fresh overview. The Cambridge History is, he said, written by historians who, for the most part, came of age during the worst of the northern TroubleS and are therefore ready to address the role of violence in the making of Ireland.

Following the seismic changes in Irish society of recent decades, they also extend the definition of atrocity to cover such questions as the treatment of orphans, unmarried mothers and the poor and destitute. And their approach to history includes the consideration of “new” aspects such as gender, sex, print, environment, culture, sport, leisure and memory.

Brendan Smith, editor of Volume 1 (600-1550) explained that the 950 years spanned the period from the first written records to the first book printed in Dublin (the Book of Common Prayer in 1551). Chapters on the Europeanisation of medieval Ireland and its outward expansion into the world, emphasising Ireland’s openness to outside influences and its capacity to influence the world beyond its shores, are recurring themes. Ireland’s economic boom during the early years of this century was also a great boon to medieval historians, as the excavations for new motorways across the country unearthed substantial and significant archaeological finds from the period.

Jane Ohlmeyer, editor of Volume II (1550-1730), recalled the 2014 workshop convened at the Trinity Long Room Hub Arts and Humanities Research Institute, to discuss whether the idea of a Cambridge History of Ireland was viable and, if so, how – and by whom – it should be executed. A consensus quickly emerged that not only should the History be written, but that the four volumes should be published simultaneously and before the end of the decade.

Nobody foresaw Brexit, but the resultant debate underlines how the “Irish Question” never really dies; it just gets reformulated. And of course like many other “hot button” issues today, including migration, climate change and gender equality, it can be illuminated by examining history, while the current global ríse of factionalism and the far right gives a new emphasis to the famous quote attributed to Edmund Burke: “Those who do not know history are condemned to repeat it”.

For example, Prof Ohlmeyer pointed out, while we are still adjusting to the notion that 20 per cent of people living in Ireland today were not born here, it’s often overlooked that in the early 18th century Ireland was ethnically diverse, with over one-third of the population of immigrant stock, while more than 70 million people around the world claim Irish descent, among them 10 per cent of the UK population. The 100-plus contributors to the Cambridge History of Ireland, who are from 38 institutions around the world, reflect the global interest in Irish history and culture. The past, said Prof Ohlmeyer, is literally part of our DNA, and examining our history can contribute to the discussion of what it means to be Irish today.

These were among many reasons to embark on this new History of Ireland. But Prof Ohlmeyer emphasised that there is no attempt to impose any political “agenda” on Irish history or to present a consensus view. Instead, the four volumes represent this generation’s “take”, in all its diversity, on the scholarship of the last 40 years, as we enter into a highly sensitive time, with Brexit and the closing years of Ireland’s Decade of Centenaries. Indeed, there are sometimes conflicting interpretations of the same events and overall, less than a third of Volume III deals with “high politics” in any form, while there are fascinating chapters on material, social and economic culture.

The unifying approach is to go back to the archives, telling history through the voice of contemporary sources such as the 1641 Depositions – eyewitness accounts of the fateful 1641 rebellion. Another new aspect of the Cambridge History is the multiplicity of perspectives: there was a very deliberate effort to include the voices and viewpoints of ordinary people as well as the elite; popular culture as well as fine art and “high” culture; and daily life as well as the drama of wars and disasters. Many of these new perspectives were facilitated by technology that has made – and continues to make – accessible more archives than ever before, allowing historians to ask questions of sources that were previously unimaginable.

James Kelly, editor of Volume III (1730-1880), described his editorial task of trying to perceive whether there was a line of argument that could structure an approach to the period, his decision to explore contemporary accounts of Ireland by travel writers, mostly German and English, and the surprises that arose from their accounts of what was still a deeply divided society after the transformations of the 17th Century.

This was a period of continuity as well as change that, although usually portrayed as the era of “Protestant Ascendancy”, in fact embraced two phases – the 18th century when that ascendancy was at its peak and, after the Act of Union, the 19th-century period when the Protestant elite sustained a determined rearguard defence in the face of modern Catholic nationalism. The freshness of the analyses in the Cambridge History is helped by the “extraordinary explosion in the availability of papers of politicians of the 18th century”. These papers, which have become available in recent decades, go some way towards compensating for the destruction of State records in the 1922 Customs House Fire.

After a lively Q&A, the panel discussion closed with a brief contemplation of what a History of Ireland written in 2048 might look like. Balanced with aspirations for complete gender equality of contributors and new technological tools that will allow interrogation of the archives in ways we can’t even begin to imagine yet, were concerns that the uneven approach to preserving the ever-dominant digital records of our times may leave future historians with a “black hole in terms of late 20th and early 21st century history – not only in Ireland but elsewhere” as Crowe cautioned.

On an optimistic note, Prof Bartlett described the Cambridge History of Ireland as “a springboard to future investigation, by no means the definitive take on the last 50-60 years, but a contribution to the ongoing history of Ireland”.