The Neighbourhood by Mario Vargas Llosa: who is writing this? 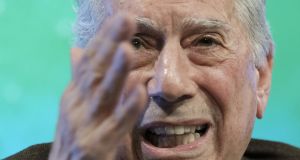 The question posed immediately by this book is: who is writing it? Primarily, of course, there is Mario Vargas Llosa, Nobel laureate, great Latin American novelist, author of masterpieces like The Feast of the Goat and The War of the End of the World. Then there is the other Mario Vargas Llosa, the man once described as the Newt Gingrich of Peru, admirer of Margaret Thatcher, free market-loving, neoliberal politician, and failed presidential candidate. His nemesis in that 1990 election was Alberto Fujimori. In a novel set in Lima during Fujimori’s controversial rule, the reader might expect the settling of old scores, but most of the time Mario 1, the consummate novelist, is firmly in control.

The novel opens with a lesbian sex scene which manages to be not too embarrassing, if a little vanilla. The main characters are two couples, members of Peru’s oligarchic elite. Marisa (aka Blondie) and Chabela wear beige, and spent their days in an exhausting round of Pilates, Italian lessons and lunch parties. Their husbands, Enrique and Luciano, a mining engineer and a lawyer, wear suspenders with their shirts and ties, and proudly display their doctorates from MIT and Columbia in their boardrooms and offices. Chabela owns an apartment in Miami, a five-hour flight away, which comes in handy for her and Marisa’s weekend Sapphic trysts. Their only real anxiety is the campaign of kidnappings and bomb explosions by the Maoist insurgency, the Shining Path, which convulsed Peru in the 1990s.

The plot revolves around a scandal sheet edited by a muckraking journalist. He gets his clammy hands on some compromising photos of Enrique and attempts to blackmail him. This sets off a train of events that never quite amounts to a thriller. We are encouraged to think that the revelation of the manipulation of the yellow press by Fujimori’s government to discredit political opponents is what the blurb calls a “a scathing indictment of dictatorship”. But, in the blaring, brazen light of the Donald Trump era, with its social media wars and fake news, it all seems a bit, well, beige. What’s not beige is the man pulling the strings, the sinister figure of “the Doctor”, based on Fujimori’s real life henchman, head of the intelligence service Vladimiro Montesinos. Enrique and Luciano despise him, not because of his record of torture, murders and disappearances, but because “he wore yellow shoes with a blue suit”.

Despite its overall weakness, the novel is never less than readable, and Vargas Llosa’s mastery is visible in the colourful details and beautifully drawn minor characters. There is the “poetry reciter” Juan Peineta, who abandons poetry to sell his soul to television. His career is eventually destroyed by the yellow press, and he lives out his final days in a shabby hotel room with his cat, Serafin. Serafin accompanies Juan on his walks around Lima – except when he goes to Barrios Altos, having apparently heard the rumour that cats who venture into this impoverished neighbourhood end up as fricassee.

Discussing the paradox of the “the two Vargas Llosas”, the critic Alberto Manguel describes him as “a sightless photographer, blind to the human reality his lens has so powerfully captured”. It seems, he says, as if the politician has never read the writer. Luckily for us. Because even in this novel, the tangled web of class and race in Peru is never far away. The writer always makes us aware that the brightly lit central characters are surrounded by a shadowy, nameless army of maids, butlers, cooks, chauffeurs and bodyguards. In what is the most striking image in the novel, Engineer Enrique and his wife, enjoying a cocktail on the terrace of their golf club apartment during one of the regular blackouts caused by terrorist explosions, look up at the surrounding hills to see torches forming a hammer and sickle. Not so far-fetched perhaps to see the torch-bearers as the spiritual heirs of the messianic Antonio Conselheiro and his peasant followers, immortalised by Vargas Llosa in The War at the End of the World.

Michael O’Loughlin is a poet and critic