The key difference between the sexes? Attitudes to sex 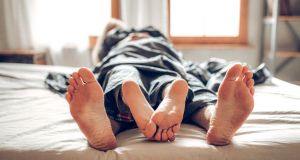 Why do men and women approach sex differently. There is, it is argued, a ludicrously simple explanation: women get pregnant, men don’t. Phyotograph: Getty Images

One spring day in 2009, a young Danish woman called Laerke Bjerager spotted a man she fancied, walked up to him on a busy Copenhagen shopping street and asked him for sex. He said yes. Then she went and offered another man the same, and another, and another.

Most said yes. Those that didn’t generally had girlfriends. “They were apologetic, they didn’t want to hurt your feelings,” she says. The experience was, she says, a “very efficient confidence boost”.

Elsewhere in Denmark, a young man called Kaare Bro Wellnitz was asking the same question to women but having the opposite experience. His confidence, in fact, was taking a bit of a bashing. By the end of his first day he had had “no real yeses”. There was one woman who said yes, but she was laughing – and it was more a “yeah, sure” rather than a “yes, please”.

If the women had said yes then, a few seconds later, they would have learnt the offer was a sham.

These Danish students were repeating an experiment on gender differences in casual sex that is a classic in the field. It is such a classic that the line they used: “I’ve noticed you around, I find you very attractive, would you go to bed with me?” made it into a 1998 hit pop song.

The experiment was an investigation into the different attitudes to casual sex among men and women. As always happens whenever this experiment is run, the students found that no woman agrees to random sex with a stranger – while most men say yes.

Gender is changing – or, at least, our idea of the stereotypes surrounding it are. Girls can aspire to be astronauts, boys to be house husbands. Girls can climb trees, boys play with dolls. Toys are not divided by pink and blue, or if they are their manufacturers live in fear of the censorious spotlight of social media. Millennia of prescribed gender roles are being reassessed in the light of #metoo, and a newly invigorated fourth wave of feminism.

Once this process is over, many argue that nothing else of gender will remain, that the difference in behaviour between the sexes – so longer considered immutable – will disappear too. Will it though?

I have written a book about gender differences. But it is not about whether men are more suited to being Google programmers and parallel parking, while women are better at multitasking and doing arts degrees. It is about what I consider to be the last redoubt of gender, the part of our divergent psychology that will remain even if all else does not: men and women’s approach to sex.

If you want to see the place where the apparent differences between the sexes remain most starkly defined, then you could do worse than look at sex.

From America to Zimbabwe, scientists have found men are keener on one-night stands. Scientists have peered inside marriages. At every age, at every stage, husbands want more sex than their wives. They have asked people their ideal number of lifetime sexual partners: among undergraduates, women said they wanted a bit over 1 and men on average wanted 14.

Scientists have looked at what happens when you remove women from the equation. Among gay men, acting without the brake of female caution, rock-star levels of partners suddenly becomes a reasonable aspiration for even non-rock stars. One pre-HIV survey in the US in 1978 claimed to have found that almost half of those quizzed had managed 500 sexual partners in their lifetime. The scientist involved noted, “The subculture of gay men did briefly establish bathhouses and other institutions that allowed men to have sex with half a dozen or more partners in a single evening.” Roy Baumeister, a US psychologist, lamented in his 2001 review of promiscuity, “Lesbian communities do not seem to have created any market for such institutionalized orgiastic behavior.”

But why are the attitudes so different? Why do men and women approach sex differently. There is, it is argued, a ludicrously simple explanation: women get pregnant, men don’t.

When one sex has to spend more time and energy on its offspring – for instance by gestating it – that sex would do better by being more choosy regarding who it mates with. Mating indiscriminately would risk putting a lot of effort into allying with bad genes, and with a feckless partner who would offer little in the way of help.

Conversely, if the other sex has to invest little – for instance a plausible smile and a nice glass of Sauvignon – it is incentivised to mate whenever it can. It’s always a reproductive advantage to have more offspring, when having more offspring costs you nothing.

This does not mean men never want to commit; a child brought up with the help of a father has a far greater chance of success. But it does mean that the calculus for them is very different.

This was what the “Would you go to bed with me?” has attempted to validate, ever since it was first attempted on a Florida State University campus in 1978. They too found that most men said yes, all women said no.

In Denmark, with the 2009 repeat, they decided to also record the manner of rejections. Those men who had to refuse offered excuses. “They said, ‘I have a girlfriend coming to stay, could it be next week?’” said Henrik Høgh-Olesen, the University of Aarhus professor behind the study. “They apologised, they felt they had to – to excuse that they were not man enough to take this great invitation from a moderately attractive person.”

On the other hand, said ProfHøgh-Olesen, the women reacted in a manner that could almost come from a biology textbook. “They said, ‘Aren’t you able to make an effort? We need more effort.’ They were saying, this is your job in this game - to make an effort and bring presents and gifts to convince me, while I have to be a bit reluctant in order to find a suitable partner.”

So is this an ancient evolutionary calculus found in modern streets? The experiment has not been without its critics. Is it really measuring an aversion to casual sex among women? Or is it measuring something even more basic: fear? Is there a less unnatural way of measuring the same effect?

To answer that, consider what happened when Michael, a 24-year-old man, and Hannah, a 24-year-old woman, visited the streets of New York with an even bolder proposition: they went on Tinder and swiped right on everyone in the city. They effectively declared themselves open to offers from all the city’s eligible singletons. Michael and Hannah, of course, did not exist – they were some of a set of fake profiles created by a scientist from Queen Mary, University of London.

But their respondents did. As far as their respondents were concerned, Michael and Hannah had just said to the whole city. “I’ve noticed you around, I find you very attractive, would you go to bed with me?” And would they?

“Our female profiles were popular, really popular,” said Gareth Tyson, the scientist behind the experiment. “Within seconds you get the first match.” Eventually, 10 per cent of her swipes produced a match.”

And the male profiles? “The number of matches is very, very, very slow.” They plateaued at 0.6 per cent. For the putatively heterosexual Michael, it got worse: most of those who responded were gay men.
From X and WHY: The Rules of Attraction: why gender still matters by Tom Whipple (Short Books, £9.99). Tom Whipple is science editor at the Times.