The 50 pieces in this magpie’s collection use a classical perspective to reflect on universal themes such as divinity, humanity, education, happiness, love, loss, nature and death 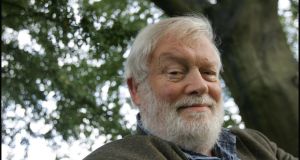 Michael Longley: “I so relished this line that in 1965 I pinched it (and modified it) for a poem of my own, Persephone.” Photograph: Brenda Fitzsimons

Line of Enquiry is a worldwide first. Fifty classicists from across the world have been tasked by Trinity College Dublin with the disarmingly simple task of choosing their favourite line of classical literature and explaining their choice in one short page. Their responses and reflections have been brought together by Trinity College Press in a meticulously-produced collection.

Each contribution is a manifesto, a summation of a life (however short or long) shaped by a study of the Classics. As a collection it is compulsive reading for classicists and non-classicists alike – illuminating in its variety and refreshing in its candidness. Within its pages are found contributions from current Trinity undergraduates, postgraduates and professors, world-famous academics from Harvard, Berkeley, Oxford, Cambridge and elsewhere, as well as Irish cultural figures such as Michael Longley and Peter Fallon.

Line of Enquiry is also a uniquely Dublin-based project, edited by a current Masters student under the guidance of the Trinity’s Chair of Latin, and dedicated to Dublin University’s own Niall Rudd, one of the most distinguished classicists of his generation. The book was recently launched in Trinity’s renowned Long Room.

What is the ultimate value in personal recollection, and in this collection? In the words of Niall Rudd, “perhaps the magpie’s approach, however, unrespectable academically, is the most rewarding”. The 50 pieces in this magpie’s collection use a classical perspective to reflect on universal themes such as divinity, humanity, education, happiness, love, loss, nature, journey and death.

From the opening of St. John’s Gospel at number 1 to the conclusion of Homer’s Iliad at number 50, Line of Enquiry guides its readers on a truly personalised tour through the most memorable literature of the classical world.

Here is a selection of six lines from the book, and the writers’ explanation for why they chose them.

As an undergraduate, one day I sat down at a desk upon which lay a volume of Pliny the Elder’s Historia Naturalis. Amusing myself with ancient trivia, I first came upon this line. The mental image of a noble Roman, gravely sitting at his desk with a bra tied around his head, was so bizarre that it bridged the centuries, bringing him to the immediacy of my mind’s eye: an elderly man, happy in his work and not caring in the least about what he looked like to others.

Pliny the Elder was no longer a text, but a person. In his determination to distinguish between hearsay and evidence, Pliny came to represent the spirit of inquiry. Ultimately, this line demonstrates that the words we keep as talismans to guide us through our lives need not be deathless prose, they can be found in the oddest and most overlooked of places, randomly found on an empty desk.
Katharine von Stackelberg, Associate Professor of Classics at Brock University, specialising in the ancient environment, Latin and Roman History

et canat ut soleant molliter ire pedes
And who will sing of how softly her footsteps go?
Propertius, Elegies 12.24, translated by Michael Longley

As a student of Classics in Trinity in the 1960s, I was most deeply attracted to the edgy poetry of Sextus Propertius and, in order to impress my Professor Donald Wormell and compensate for my scholarly indolence, I tried to translate four or five Propertius poems. I so relished this line that in 1965 I pinched it (and modified it) for a poem of my own, Persephone, which appeared in my first collection. This is how it ends:
The weasel and ferret, the stoat and fox
Move hand in glove across the equinox.
I can tell how softly their footsteps go –
Their footsteps borrow silence from the snow.

I know in my bones that Persephone is one of my best poems. I have it by heart. I would not have written it without:
et canat ut soleant molliter ire pedes.
Michael Longley is a central figure in contemporary Irish poetry. He graduated from the Classics Department of Trinity College Dublin with a BA in 1963

But instead I’m turning to the fourth and final part of Virgil’s epitaph, “Cecini pascua rura duces”. Again that inimitable music and the repeated sound of the first two syllables kick-starting the backbeat, launching the rhythm, and the rightly fabled economy. Could that ever be rendered in English in a mere four words? I ventured “I sang of farms and fields and men who lead”, aspiring to reflect the whole reach and range of Virgil’s voice and vision.
Peter Fallon is a renowned poet, editor, translator and publisher, and is the founder of the Gallery Press, Ireland’s pre-eminent literary publishing house

I love an arresting first line. The early Greek poet Alcaeus asserts his perspective on the storm which he is about to describe. Hear it. Does it matter what storm exactly Alcaeus describes here? Cosmic (tempest), political (war) or personal (turmoil), a storm is a storm. It’s not fun. My line belongs to a memorable poem, and yet it works perfectly on its own. It has stayed with me for 35 years, since that first encounter in secondary school back in Italy. For the life of me I could not understand how a word manifestly meaning “position” – στάσις – could possibly indicate direction. (If you stand by a compass, your position is, in fact, a direction.) But how can this “direction” also mean “discord”? Alcaeus’s line is actually untranslatable. More fundamental questions remain open. Is direction always a strife? Where do I stand in relation to the compass? What is my compass? Do I have one? Well, that much I’ve learned: “I don’t understand” is not an answer; it’s a point of view. It doesn’t come at the end, it comes at the beginning. The journey, thankfully, continues.
Anna Chahoud is Chair of Latin and Public Orator at Trinity College Dublin

Here, very near to the close of Juvenal’s third Satire (line 316), strikingly simple syntax and vocabulary evoke the tranquil ending and homeward trek of a pastoral day. But the context is not pastoral, the direction is not homeward, and the speaker is not reliable. He is the sour Umbricius, who has been complaining for almost 300 lines that the cultural and moral disintegration of life in contemporary Rome has forced his departure for a distant rural backwater.

For me, the irony of this fine line’s original setting leaves it adaptable to redeployment with figurative sense in a wide range of contexts. If I remember it on my deathbed, I would like to think I might quote it. As it happens, however, I have already used it in far less sombre but nevertheless poignant personal circumstances. I quoted it affettuoso at the close of my valedictory lecture in Leiden University, when I was about to step down from the chair of Latin and relocate in retirement to a quiet cottage on the south-west coast of Wales, though with every intention – unlike the sour Umbricius leaving Rome – of returning to Leiden now and then. It felt right.
Joan Booth is Emeritus Professor of Latin language and literature at Leiden University

ὡς οἵ γ’ ἀμφίεπον τάφον Ἕκτορος ἱπποδάμοιο
Such was the funeral they held for Hector, tamer of horses
Homer, Iliad 24.804

It was only when I read through the whole of the Iliad in Greek, as a graduate student at the University of Toronto, that I remember feeling moved to an extraordinary degree by the peaceful, quiet ending of the poem. After the celebration (or critique?) of war and blood-madness of the books of fighting, the serenity at the end struck me as a picture of human beings behaving more in line with their better nature (my values, of course, not those of Achilles!).

Perhaps being outside the island of Ireland at the time had led me to think in a different way about the situation in Northern Ireland, which was particularly grim in the mid-1970s. There was a sort of fatalism at the time, a feeling that there just was no hope to ending the violence. I remember thinking that if the mad Achilles could relent and allow horse-taming Hector to be laid to rest in peace after such bitter fighting, then perhaps we would find a better way in Ireland.
Brian McGing is the Regius Professor of Greek at Trinity College Dublin