A book that gives girls and boys permission to be themselves 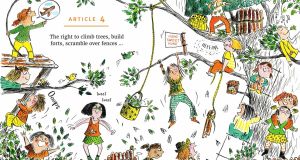 This is a book that tells children they can play with whatever toys they like, wear what they like, and aspire to be what appeals to them

We all know the problem so well that even talking about it can seem obvious and cliche-ridden. You try to buy an article of clothing for a little girl and you have to choose between pink and pink. You try to buy a toy for a little boy, and you are faced with an aisle of toys clearly intended for boys and only for boys, many of which could get you arrested if you took them out of the box and carried them around town with a particular kind of swagger. There has to be money in gender-differentiation, because the manufacturers of goods for children are so deeply committed to it that it feels like a sinister social control programme.

Declaration of the Rights of Boys and Girls is a bit of a push-back against the gender colonisation of our children. This is a book that tells children they can play with whatever toys they like, wear what they like, and aspire to be what appeals to them. It gives girls and boys permission to be themselves, and it encourages them to give this permission to other boys and girls.

This book was originally published in France – as two books, one for girls and one for boys. When Little Island found these books at the Frankfurt Book Fair, we fell upon them with great glee. The lively, quirky illustrations caught our eye, and the idea had immediate appeal. It was only after we got home to Dublin that it occurred to us that instead of publishing one of these books and then maybe the second, we should take the bull by the horns and publish the two together. That way, girls and the parents of girls are exposed also to the boys’ side of the story, and vice versa. And that really is the point: it works both ways. Our culture has just about developed to the point where it’s OK for women to be pilots or bank managers or president; but we haven’t all quite got our heads around, for example, male nurses – in spite of their obvious presence in our hospitals. There is definitely more resistance to boys taking on what the culture considers to be feminine roles than to girls doing the opposite. That was the thought that clinched it for us. We had to do both books and we had to do them together, so that readers, children and their adults, would have to think about both points of view, and see the logic in the argument that what is sauce for the goose is sauce for the gander – and this applies to goslings too.

The author, Élisabeth Brami, trained as a psychologist while the illustrator, Estelle Billon-Spagnol, studied law and joined the police force in a past life, before throwing it all up in in favour of art. Their collaboration on this book is perfect: the language is spare and clear and the illustrations leap off from the words and explode the ideas into delightful and colourful scenarios, full of little jokes that quickly convince the reader of the rightness of the propositions here, without for a moment haranguing or lecturing. A joy!

With such sparse text, amounting to only a few hundred words altogether, we thought it would be a doddle to translate. It was not a doddle to translate. The “rights” themselves were easy-peasy, but the illustrations have snippets of text in speech bubbles, riddles and jokes and sound effects that are deeply rooted in their own culture and which were quite a challenge – though also a lot of fun.

We noted that Amnesty International France had endorsed the original books. We have a good relationship with Amnesty International Ireland, so we asked them if they would like to endorse our English-language version of the book too. We and Amnesty have shared views on human rights, and Amnesty Ireland readily agreed to let the world know that they think this is a super book and one that Irish families and schools should be reading to and with children.

Little Island has prepared a short “book guide” for Declaration of the Rights of Boys and Girls, intended mainly for use in schools but that parents can also use to open up discussion about these ideas with their children. You can download this for free from our website – littleisland.ie
Declaration of the Rights of Boys and Girls by Élisabeth Brami, illustrated by Estelle Billon-Spagnol and translated by Siobhán Parkinson, is published in Ireland by Little Island, at €15. Parkinson is an author for young people and the publisher at Little Island Books. She was Ireland’s first Laureate na nÓg from 2010-2012