The most curious man in the world

‘Collecting the World’ review: Curiosity and collecting were central to science in Hans Sloane’s lifetime, and James Delbourgo does a remarkable job of showing how these practices were bound up with slavery and imperial expansion 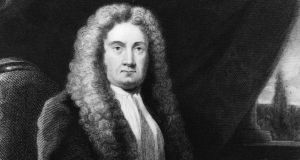 Book Title:
Collecting the World: The Life and Curiosity of Hans Sloane

A story once circulated about George Frideric Handel. In London in the summer of 1740, he took tea with a renowned collector in Bloomsbury. The composer caused consternation when he placed his buttered muffin on one of the collector’s prized old manuscripts. He was not invited back.

Handel’s host was Hans Sloane – the son of a minor Protestant family, born in Killyleagh in Co Down in 1660. Sloane had made his name (and his fortune) as a naturalist and a doctor, travelling to Jamaica before settling in London, where he became a high society physician and the best-known collector of his day. His collections, donated to the nation on his death, formed the basis for what became the British Museum. James Delbourgo’s deeply learned and highly readable Collecting the World is a biography of one man who tried to do just that: Sloane stood at the centre of networks that criss-crossed the globe, brokering information and acquiring objects in an attempt to catalogue the wonders of the known world.

Sloane’s story is the story of the early British Empire. Mercifully, Delbourgo avoids the tendency of much popular history to treat the empire sympathetically, as an institution that – while cruel and gruesome on occasion – also helped to spread the benefits of civilisation (railways, prudishness, gin) around the globe. Delbourgo instead shows how Sloane’s early years in Jamaica, where he began to make his name as a naturalist and collector, were spent in the willing service of the brutal regime of Atlantic slavery. He seems to have shown little empathy with the plight of the enslaved people he encountered: his work as a plantation doctor served the economic interests of planters, while “[the] ethnographic curiosity Sloane evinced” in his two-volume Natural History of Jamaica (1707-25) “is ultimately indissociable from the kinds of practical questions his planter allies wanted answered so they could fortify the institution of slavery”. Curiosity and collecting were central to science in Sloane’s lifetime, and Delbourgo does a remarkable job of showing how these practices were bound up with slavery and imperial expansion.

Packing up to leave Jamaica, Sloane brought with him an iguana, an alligator, and a yellow snake. None of them made it home alive (the iguana drowned and the snake was shot), but his many other specimens laid the foundations for a collecting life. Sloane practised a “highly social form of science”, spinning a web of contacts including technicians, artists, explorers, and slaves who allowed him to bring the world to London. Visitors like John Locke and Benjamin Franklin could marvel at ancient coins, Egyptian antiquities, “an east Indian god [or] idol made in gold”, a Chinese penis ring, and a number of pillars from the Giant’s Causeway. He had a spectacular collection of shoes. His Chelsea garden was a hub for the scientifically curious – in 1720, Sloane held a dissection of a Sumatran elephant there. Having become “one of the pivotal information brokers in the Republic of Letters”, the Chelsea gentleman, who walked with the aid of a tortoise-shell cane, had established himself as “the most curious man in the world”.

Collecting the World is more a biography of Sloane the collector than of Sloane the man – his wife and daughters merit only a handful of mentions, and there is little on the individual behind the public façade (an approach partially dictated by the nature of the surviving sources for his life). When Sloane died in 1753, at the age of 93, he had been hatching a plan to donate his collections to the nation. His personal fame was quickly eclipsed by the British Museum which housed them, founded “not only for the inspection and entertainment of the learned and the curious, but for the general use and benefit of the publick”. This mission was controversial at first: one officer complained about “persons of low education” who believed that since the museum had been “purchased with the money of the people”, they were “intitled to the free use of it”. This opinion he deemed “quite unfounded”.

Still, the people came, as they continue to do. An article published in 1832 urged working-class readers to steel themselves and claim their right of access. “Knock boldly at the gate”, and disregard any trepidation, since “You are come to see your own property. You have as much right to see it, and you are as welcome therefore to see it, as the highest in the land . . . Go boldly forward, then.” In Britain – as in Ireland – the value of public collections and public institutions like the one imagined by Sloane has come under renewed threat in recent years. In telling the story of one collector, James Delbourgo lays bare what creates a collection – the relationships of people and power, of curiosity and context – and the threats that face it, particularly when it becomes public property.