‘He’ review: A complicated reimagining of Stan Laurel’s life 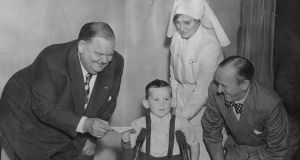 John Connolly, author of the Charlie Parker series of detective novels, has never been afraid to experiment outside his first genre. And his forays into fantasy, horror and children’s fiction are never without their sense of humour, so perhaps it is not surprising that his latest book is about the life of Stan Laurel. It is, however, a work of fiction, a reimagining of Laurel’s life. This is not without difficulties. As Connolly says himself, “The version of Stan Laurel in these pages is a construct, and one that I accept may not meet with unanimous approval”.

The book fans backwards from Laurel’s last years in his Oceana apartment, as he remembers the tough years before success came with a chance partnership with Oliver Hardy. This is a book about love: love of women, love of men, love of art, love of comedy. It’s also a book about haunting: Laurel’s haunting by Charles Chaplin and the ghost of their early struggling lives on Fred Karno’s vaudeville circuit, not to mention several wives in pursuit of alimony.

It is harder to suspend disbelief when Stan Laurel is not an imaginary character. The reader can’t help questioning the verity of Laurel’s thoughts and opinions. Chaplin is shown in a very unflattering light, although the real-life Laurel actually “refused to say a bad word about him”, according to Connolly. Sometimes it’s hard to be convinced by Laurel’s tears and private regrets, especially when a rather biblical and melodramatic style of repetition is employed – as here at the end, referring to Laurel’s lawyer:

Ben Shipman will handle the details.

Ben Shipman will look after everyone.

And no one will speak to Ben Shipman of his loss.

But what catapults the reader straight into Hollywood’s Golden Age is the enormous amount of research and passion that lies behind He. When those researched concrete details coalesce, a world of Dickens-like detail leaps off the page. Here Connolly writes about his struggles to free himself of Mae, his early common-law wife who stands in the way of his success.

… stars do not undress in freezing Wisconsin dressing rooms, and warm themselves with shared bottles of cheap liquor, and listen to midgets squabble and blackface comics complain about their billing.

Woman are a very important part of He, and Connolly does not look away from this seamier side of Hollywood. Women were treated appallingly. Even by Charley Chase, whose wife, BeBe, knows he is “not a bad guy … which is why she pretends not to notice the blondes. She wishes her husband would not cast them in his pictures, though. It makes them harder to ignore if she has to view them magnified on a screen before her.” The horror of young female lives used and abused and thrown away by Chaplin while the relentless Hollywood machine protects its stars is one of the most chilling aspects of the novel.

Connolly does not excuse Stan Laurel, whose simple character on screen hid a ferociously complicated love life. He had four wives, one of whom he married twice. There is no doubt that the death of his son affected his first marriage, but the seeds were sown from the start with Mae and they came back to haunt him in increasingly costly divorces. Hardy comes across rather too saintly despite his own dalliances – even if his wife, Myrtle, was an alcoholic. Of course, this is Laurel’s vision of Hardy, and theirs was a very loving relationship, but even the warts seem to be in soft focus.

The portrayal of the owner of the famous Lot of Laughs, producer Hal Roach, is excellent – complex and funny. He was a manipulative tightwad who staggered Laurel and Hardy’s contracts so they were never able to quit at the same time, but he did provide Laurel with autonomy and respect he would miss later when they moved to Fox.

Laurel and Hardy led incredibly strained lives. Their rise to stardom was earned and darkened by years of toil up the slippery slope to the top, from which the greatest star could slide so quickly. He shows how comics learned from each other and captures the speedy excitement during those early years of cinema. Connolly’s greatest strength is when he keeps the writing tight, fast and funny. The truth shines then like the best gags or Harold Lloyd’s reply to Laurel when he first arrives on the lot at Hal Roach’s studios, asking for any useful advice: “Always check the fuse.”

Martina Evans is a poet and novelist. Her latest book, The Windows of Graceland: New and Selected Poems, is published by Carcanet