The Slovenian philosopher divides opinion over his often-contradictory viewpoints 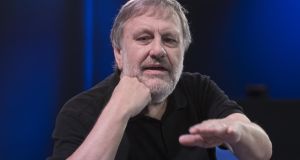 Slavoj Žižek: He’s been called the Elvis of cultural theory and the Borat of philosophy. Photograph: Ulrich Baumgarten/Getty Images

I’m 20 minutes into an interview with Slavoj Žižek when he propositions sex. As a thought experiment, I stress.

“Imagine a love encounter. Let’s say you are a beautiful lady.” He holds his hands up and grins. “Sorry, heterosexual! I’m old-fashioned. I am a guy, I want to get you.”

Such is the nature of conversation with the Slovenian philosopher that he spins from enunciating Marxist social theory one moment to asking about Ireland’s record in combating Covid-19 the next. Right now he is focused on the implications of futuristic technology – envisaged by the likes of Elon Musk – which would transmit thoughts directly from one brain to another.

“There will be no promises of seduction. Our minds are in contact and your mind reads a signal in me: ‘I want to screw you.’ I get it back: ‘Over my dead body,’ and it’s over in a split of a second.”

Musk says he is developing a device called Neuralink with exactly this capability. The Tesla boss claims it will be ready in as little as five years, after which, according to the hype, human language will be rendered obsolete.

Žižek doesn’t buy it. “Our minds work only through language, I claim. Language is this paradoxical intruder,” he says. “Because we have to communicate in language, I never know exactly what you mean but the very obstacle generates a surplus of meaning.”

Žižek – pronounced “Djee-shek” – divides critical opinion. One camp takes him seriously as “the Elvis of cultural theory”: an original and invigorating left-wing thinker. A second camp treats him as a joke: a high-brow comic act, or “the Borat of philosophy”, obsessed with sex, movies and the abstruse writings of Georg Wilhelm Friedrich Hegel.

There is a third faction which takes Žižek seriously but as a dangerous relativist. One proponent of this view described him as “the most despicable philosopher in the West” highlighting, among Žižek's many crimes of reason, his claim that Gandhi was “more violent” than Hitler because “Gandhi didn’t do anything to stop the way the British empire functioned” in India.

Many people previously sympathetic to Žižek were driven into this third camp a few years ago when he expressed his support for Donald Trump over Hillary Clinton in the US presidential election.

“I am tempted to changing my position,” he tells The Irish Times. “I will put it like this. I don’t think my old statement – ‘Trump better than Hillary Clinton’ – was wrong because my calculation was a simple one: If Trump wins it will give a new boost to the left, and it did strengthen. It almost split the Democratic Party [and helped] not only Bernie Sanders but Alexandria Ocasio-Cortez. It created, for the first time in I don’t know how many decades, a true American left. So I still think the great merit – I’m sorry for this obscene term to be used with somebody like Trump – is Trump mixed the cards in a new way.”

Who would he vote for this time, Joe Biden or Trump?

“Biden is long-term the same catastrophe as Trump,” he replies. While welcoming “the chaos” of the current incumbent, “I think Trump is a little too much.” On the other hand, the Democratic contender “is sometimes, you can see, painfully senile”. Without giving a straight answer, he says he hopes Biden “has this talent Ronald Reagan had. I was told . . . Reagan had a good Leninist talent to nominate the right people to positions. I hope [Biden] will build a better équipe around him, which will somehow control the situation”.

As a committed Hegelian, or more accurately Hegelo-Lacanian – his other lodestar is French psychoanalyst Jacques Lacan – Žižek is constantly holding at least two opposing ideas in his head at once. At one juncture, he describes the Hegelian outlook as “desperately optimistic” but he also says, “I don’t know a much more pessimist philosopher than Hegel.”

To the extent that Žižek accounts for this particular contradiction, it is in the fact that no one is sure what Hegel actually believed; he was, after all, a philosopher described by Arthur Schopenhauer as “a flat-headed, insipid, nauseating, illiterate charlatan, who reached the pinnacle of audacity in scribbling together and dishing up the craziest mystifying nonsense”.

Žižek is Hegel incarnate in one sense at least: He has an enormous catalogue of work, producing a book roughly every six months. So frequently, in fact, that he loses track of the title that he is currently promoting.

“Which book are you talking about?” he asks about five minutes into our Skype call. “Ah, it’s already that one!”

The book in question is Hegel in a Wired Brain, a meditation on what the German philosopher – born 250 years ago on August 27th – would make of technological progress. Žižek doesn’t use social media and says he has never had a Twitter account; the “personalised” aesthetic doesn’t appeal to him.

“I have this old philosophical disdain, when somebody says ‘I personally feel like that’, my immediate reaction is: ‘F**k off. I don’t care how you feel. I’m interested in truth. Truth not in the naive sense of objective truth but truth in the sense of what is the presupposition of what you’re saying’.”

He credits Angela Nagle, the Irish author of Kill All Normies, for influencing his view of online communities. A “weird reversal” has occurred, says Zizek, where“the new right almost appropriated all the vulgarity” once associated with student reformists, “and much of the new left is going into this politically correct direction”.

I have a personal question. Don’t laugh at me. I ask every Irish person: de Valera versus Michael Collins?

He adds: “This is my problem with the tendency to get rid of all reminders of racism, sexism and so on . . .” While “I am for this struggle”, he asks whether “ruining monuments” is the best tactic. René Descartes, for example, “is the quintessence of the western mind, pure rationalism, privileged man, no sense of empathy, and so on –but wait a minute! Do you know how popular Descartes was among women readers? Why? Because cogito – the pure Cartesian ‘I’ – has no sex; it’s open to contingent sexual construction . . . Without cogito there is no modern feminism.”

Whatever about the quality of his logic, Žižek is charming company.

“I have a personal question,” he interjects. “Don’t laugh at me. I ask every Irish person: de Valera versus Michael Collins?” Later, he cites the Dublin-based novelist Tana French – “a big hit in Slovenia” – as evidence of Ireland’s greatness. “Every stupid, small nation can have a great poet, a great national novelist. To have a good detective writer means you are in.”

Given the outbreak of the coronavirus pandemic, Ljubljana’s most famous son is already thinking of the next book. It will be “something like Hegel in the Viral World”, he says, having already brought out a short tract called Pandemic! in April.

The restarting of tourists’ flights across Europe is “absolutely crazy”, he believes. At the same time, “I sympathise with the guy who says ‘I don’t want to wear a mask’. I understand him. We are being asked literally to change our nature.”

As for the effect of Covid-19 on the capitalist system, Žižek says: “What I like – ‘like’, it’s an obscene term to use here – for what goes on now is that even conservative prime ministers and presidents have to do things which, if you had to mention them a year ago, they would tell you: Are you crazy? This is radical left; it will never be done.”

Don’t expect any neat conclusions from Žižek. But even his fiercest critics must admit that, like a stopped clock which tells the right time twice a day, he inevitably hits upon some truth – even if it’s the simple truth that humans are hopelessly flawed and contradictory.

With a nod to his own shortcomings, he suggests the ridiculousness of our species is what makes us special, as it’s something no superintelligent computer can match.

“This example I use all the time – I’m embarrassed it’s in at least five of my books,” he says, before retelling a joke from the 1939 Ernst Lubitsch comedy Ninotchka: “You go to a restaurant and ask: ‘Can I get coffee without cream?’ The waiter says: ‘Sorry sir, we don’t have cream, we only have milk, so you only can get coffee without milk.’’

“This is a properly Hegelian point,” Žižek adds. Both types of coffee, along with “plain coffee” are “materially the same but they are not symbolically, in our space of meaning, the same”.

“I debated this with computer specialists and asked them a simple question: Could an artificial mind distinguish between plain coffee, coffee without cream and coffee without milk? And I didn’t get a good answer.”

Hegel in a Wired Brain by Slavoj Žižek is published by Bloomsbury Academic.