One man’s solo effort to document every Troubles death

In 1984, Malcolm Sutton began researching the name, age and status of more than 3,500 lives lost 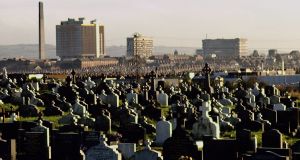 A cemetery in Belfast, where many victims of the Troubles are buried. Photograph: Jon Jones/Sygma/ Getty Images

The task that came to define Malcolm Sutton’s life began almost as a whim: Margaret Thatcher exaggerated the IRA’s lethality, and this annoyed him.

The then prime minister ascribed the vast majority of Troubles murders to the IRA, he said. “I thought: ‘That’s not right, it’s nowhere near that.’ It just stuck in my mind at the time.” His subsequent research – and work by other scholars – attributed about half of all the Troubles’ deaths to the Provisional IRA.

Sutton is not political. He has carried no banner for any side in Northern Ireland’s conflict. A working-class lad from Lancashire, he moved to Belfast in the 1970s to drive a minibus for charity and largely remained an outsider. When not driving, he was doing odd jobs or collecting the dole. But he appreciated precision. “I thought: ‘is it possible to get more accurate information?’”

And so, in 1984, he began a remarkable solo effort to document every death in the Troubles – every victim’s name, age and status, who killed them, where, and how. Sutton filled gaping holes in official statistics by gathering facts about one killing, then another, and another, the task stretching backwards and forwards in time, spanning decades, an epic chronicle of more than 3,500 lives lost.

Fresh details kept surfacing about even the coldest of cases, requiring painstaking revision. A sisyphean task, but Sutton produced an index that today is a touchstone for scholars, writers and the relatives of those who died.

Equally remarkable is the fact Sutton, now 73, did it with no training or proper resources, not even internet or email. He neither sought nor received funding or recognition. Sutton received no bursaries, no awards, no citations and this is his first interview.

“I wanted it to be a memorial to the people that had been killed,” he said, speaking by phone from his home in Belfast. “I wanted to record these deaths equally. That was important. Living here, you see how some deaths received great publicity and others were ignored. There’s a kind of pecking order. I wanted to treat them the same.”

He started jotting details on notepads from newspaper reports – principally the Irish News and Belfast Telegraph. “At first a date and name and what killed them. From this small beginning I’d no idea what would develop: it’s just amazing the amount of information.”

Pinning down basic details such as the spelling of names, date and location of death and group responsible often led down rabbit holes. He said: “It’s not straightforward because there’s always room for error. It just grows and grows – it becomes immense.”

Sutton had no formal training.He left school in Preston aged 16 and worked as a clerk before returning to school for A-levels and studying politics at the University of Hull. What he did have was curiosity and dogged persistence.

Sutton mined library archives, observed funerals, visited cemeteries, studied court and coroner records and analysed aerial survey maps - a methodical, marathon slog. Starting in the mid-1980s, he worked back to the birth of the Troubles in 1969 and continued recording contemporaneous killings during the 1990s. He included Troubles-related deaths in the Republic of Ireland, Britain and continental Europe.

With his blessing, the Conflict Archive on the Internet(Cain) website, an encyclopaedic digital record of the Troubles based in Derry, uploaded the index as an online searchable database in 1999.

Sutton still updates and tweaks it as new information emerges. He communicates with Cain via phone and post. “A bit longwinded but I like to think and take my time, go down the library maybe,” he said.

Sutton is one of a handful of individuals – Peter Heathwood is another – that has bolstered official statistics and academic research with personal efforts, said Martin Melaugh, Cain’s director. “Malcolm’s section is one of the most important that we added. Not only does it get referenced in peer-reviewed academic articles but it is also used regularly in the discussions that take place on social media. People go to Malcolm’s data to fact-check claims that others have made about the responsibility for killings during the Troubles.”

Sutton’s index stops at 2001, several years after republican and loyalist groups renounced violence. It records a total of 3,532 deaths – children, mothers, soldiers, police, paramilitaries, tourists, farmers, teachers, politicians, milkmen, on and on. The result is a monolith of unassailable facts: a record of lives extinguished that stands impervious to revisionist winds, to efforts by republicans, unionists and others to shape their own narrative of the Troubles.

“Malcolm Sutton’s index of deaths was an enormously important task carried out by a hugely dedicated individual,” said Noel Doran, editor of the Irish News. “His outsider’s eye probably increased his appreciation of the abnormality of everything which was happening and the need to provide a proper archive of the casualties.”

Doran said Sutton paved the way for Lost Lives, a 1,600-page book about Troubles’ killings published in 1999 by a team of journalists and academics. It was recently turned into a documentary. David McKittrick, one of the authors, said the team consulted Sutton’s work, among multiple sources, and credited him with a titanic effort to record a violent era.

Sutton remains barely known in Northern Ireland – he steers clear of politics and media. “I didn’t want to be pulled and persuaded. I just wanted to tread a path down the middle.”

Asked if his contribution merited some recognition, maybe even payment, he sounded startled. “I get a pension,” he said. “Why would anybody give me money?” He is happy to stay largely anonymous and declined to provide photographs or pose for a photographer.