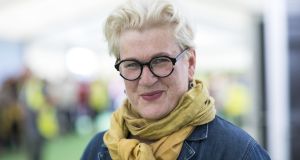 The Great Godden author Meg Rosoff. Best known for her debut How I Live Now, Rosoff has won almost every prestigious prize for YA fiction. Photograph: David Levenson/Getty Images

No adult could ever possibly be as world-weary as an articulate teenager. The unnamed narrator of Meg Rosoff’s latest novel, The Great Godden (Bloomsbury. £12.99), offers up this take on being the eldest of four: “I found living with so many opinions and so many competing streams of anxiety exhausting. Exams, sex, body image, food, grades; someone was always in crisis. Sometimes in a big family you needed to claim something to make a mark. Eating disorder, anxiety, narcissism, ponies. Anything would do.”

Later in this book we get this gem: “When people express nostalgia for youth, I always suspect they have inadequate recall.”

Rosoff, best known for her debut How I Live Now, has won almost every prestigious prize for YA fiction; she writes about sex, death, love and animals with a seemingly light touch that belies the ultimate emotional impact of her stories. You never quite know what you’re going to get, but you can trust that it will stay with you. In this latest, it’s not just the believably jaded tone that makes an impact – it’s the way Rosoff balances it, expertly, with the vulnerability of first love (or lust).

The object of the narrator’s affections is Kit Godden, an apparently golden boy from California whose skin is “lit from within as if he’d spent hours absorbing sunlight only to slow-release it back into the world”. When he and his brother arrive in the seaside village, it’s a sign that this particular family summer holiday will not be like all the others.

The “how” of that is deftly executed, unfurling quietly and precisely into something far messier than a summer romance. It’s beautifully done, and a serious contender for the best YA novel of the year.

Given that it is summer, however, breezier titles are very welcome, and Simon James Green’s Heartbreak Boys (Scholastic, £7.99) is an uplifting romantic comedy with two wonderfully relatable heroes. The “Big Gay Soap Opera” of their lives kicks off at the school prom, right after GCSEs; it turns out that their respective boyfriends have been sneaking around behind their backs.

For Nate, who’s just come out to the school minutes before, it’s devastating. For Jack, who believes in being “fabulous in the face of adversity”, it’s an opportunity: how can they get back at their exes and also take the first step into internet fame?The answer is clearly a shared Instagram account that will document what an amazing life is being had despite all the heartbreak. “Me and you, on the road together!” Jack enthuses. “How do our followers know that road is really the A46 to the arse-end of nowhere?”

Green is particularly good at depicting the cognitive dissonance involved in using social media; the boys deliberately stage the pictures they share but still respond emotionally to the images posted by their former loves. There’s no preaching here, just empathy; the same goes for the differing attitudes Jack and Nate have to coming out. This is sunshine in a book; it will make your world brighter.

Lucy Cuthew, who has written numerous books for children, both fiction and educational, steps into YA with a highly topical verse novel, Blood Moon (Walker Books, £7.99). The title references not only the protagonist’s passion for astronomy but the absurd yet very real shame and ignorance that still exists around menstruation. Frankie’s period begins in the middle of her first intimate encounter with a lovely boy; it’s a tad mortifying but not the end of the world. But then the story spreads – along with a graphic meme that leaves Frankie feeling poisoned, full of her “own toxic waste”.

The boy in question, of course, has “never been more popular”, and this doesn’t help this fragile new relationship. To make matters worse, Frankie’s best friend may have been the one to create the meme.

The fragmented nature of the verse lends itself to depicting the viciousness of public shaming, and there’s a devastating moment when Frankie’s mum sees it: “all I can think is:/ how is she/ going to love me/ after this?” There is, fortunately, a hopeful (if slightly implausible) ending, in which laughter and honesty and refusing to give into bullies mightn’t erase what’s happened, but can ease the sting of it.

For some teenagers, romantic entanglements are the last thing on their mind. In Tracy Darnton’s second thriller, The Rules (Little Tiger, £7.99), Amber goes on the run when she learns her father – an abusive survivalist constantly waiting for an apocalyptic event – is back in the country and looking for her. Both she and the reader know that it’s only a matter of time before he finds her; her rules for survival are the ones he invented. This tense, taut novel is chillingly believable.

In contrast, Patrick Neate’s Small Town Hero (Andersen Press, £7.99) questions the very nature of reality, with protagonist Gabe capable of slipping in and out of different universes. (The multiverse is a strange but wonderful mini-trend this year.) Football and online gaming also come into play as Gabe tries, unsuccessfully, to prevent the accident that led to his father’s death, and uncovers a longstanding family secret.

Despite the cool concept, the real strength of this novel is in Gabe’s endearing, smart voice. “I don’t know if adults know this,” he says, “but half the time they ask a question, they do it in a way that tells you the answer they want to hear. So you give them that answer because it’s easier. But it makes you wonder what the question was for in the first place.”

When characters spring to life like this, even the most extraordinary, logic-defying events feel possible.