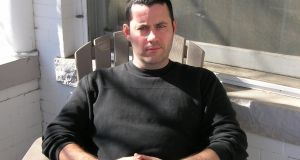 Adrian McKinty: “Two years ago, I had given up on writing altogether and was working in a bar and driving an uber, and so to go from that to this is just amazing.”

It’s the year of The Chain. First we had Connell’s must-have accessory in the hit TV adaptation of Sally Rooney’s Normal People. Now Adrian McKinty’s thriller The Chain has won Britain’s most prestigious crime novel award, the Theakston Old Peculier Crime Novel of the Year.

It’s the second year in a row that a Belfast author has won the prize, after Steve Cavanagh became the first Irish author to win the award, for Thirteen.

McKinty, who made his name with the acclaimed Sean Duffy detective series, about a Catholic RUC man, said: “I am gobsmacked and delighted to win this award. Two years ago, I had given up on writing altogether and was working in a bar and driving an uber, and so to go from that to this is just amazing.

“People think that you write a book and it will be an immediate bestseller. For 12 books, my experience was quite the opposite, but then I started this one. It was deliberately high concept, deliberately different to everything else I had written – and I was still convinced it wouldn’t go anywhere… but now look at this. It has been completely life changing.”

Mc Kinty’s family had been evicted from their home and he had all but abandoned his writing career to earn a living as an uber driver and a barman in New York when a late-night phone call from literary agent Shane Salerno persuaded him to give his dream one more shot. The result has been life-changing. The Chain has been published in 36 countries, is an international bestseller and Universal bought the rights in a seven-figure deal.

Described by Don Winslow as “nothing short of Jaws for parents”, The Chain was chosen by public vote and the prize judges, triumphing against a strong shortlist, which including books by Oyinkan Braithwaite, Helen Fitzgerald, Jane Harper, Mick Herron and Abir Mukherjee – at a time when crime fiction sales are booming, with the genre exploding in popularity during lockdown and sales soaring since bookshops have reopened.

The news was revealed in a virtual awards ceremony on what would have been the opening night of Harrogate’s Theakston Old Peculier Crime Writing Festival, which was cancelled due to the pandemic.

McKinty, who was previously nominated in 2011, 2014 and 2016 for his Sean Duffy series, will now receive £3,000 and an engraved oak beer cask, hand-carved by one of Britain’s last coopers from Theakstons Brewery.

Simon Theakston, executive director of T&R Theakston, said: “Adrian McKinty is a writer of astonishing talent and tenacity, and we could not be more grateful that he was persuaded to give his literary career one last shot because The Chain is a truly deserving winner. Whilst we might be awarding this year’s trophy in slightly different, digital circumstances, we raise a virtual glass of Theakston Old Peculier to Adrian’s success – with the hope that we can do so in person before too long, and welcome everyone back to Harrogate next year for a crime writing celebration like no other.”

The Chain is as high-concept as any thriller will ever need to be, according to Declan Burke’s review in The Irish Times. “Boston mom and part-time philosophy teacher Rachel is terrified when she receives a phone-call telling her that her teenage daughter Kylie has been kidnapped, but the kidnappers don’t just want a ransom – Rachel is now part of ‘the Chain’, and needs to kidnap someone else’s child or Kylie will be killed.

“McKinty delivers an octane-fuelled standalone that blends prosaic details (how does an amateur kidnapper get her hands on chloroform? And how much can you use without endangering a child’s life?) with a philosophical exploration of the moral dilemma Rachel faces: Kierkegaard, Camus, Schopenhauer and Voltaire are some of the thinkers the resourceful Rachel invokes as she tries to come to terms with her willingness to sacrifice another child’s life to secure Kylie’s safe return.

“Breathlessly paced and audaciously conceived, The Chain is a superb homage to the classic thriller motif of the innocent civilian plunged into chaos, and one that will very likely (and not a moment too soon) establish McKinty as one of the finest thriller writers of his generation.”

Winslow said: “You have never read anything quite like The Chain and you will never be able to forget it. Brilliant. Beautifully written. A masterpiece of tension. The Chain belongs in the elite company of world-class thrillers like Gone Girl and The Silence of the Lambs.”

While McKinty is happy to confirm that his Uber days are over, Sergeant Sean Duffy will live to fight another day. “The world has dodged a bullet now that my Ubering days are over as I’ve always been a bit of a shall we say nervous driver...but Duffy will be back. I’ve signed a contract with Orion for three more Duffys to end the series. I’m working on my second book for Hachette which should be done by the end of the summer and then it’s straight into Duffy.”

Jane Goldman (Miss Peregrine, Kingsmen, X Men: Days of Future Past) is writing the screenplay of The Chain for Universal. “I don’t know Jane but everybody in Belfast seems to have run into her when she was there working on Game of Thrones a couple of years back and they say she’s smart and funny which sounds great.”

Why is crime fiction enjoying a resurgence during the Covid-19 pandemic? “I think the resurgence has been happening for the last five years and it’s only in lockdown that our escapist fantasies/nightmares are fully playing out in our fictional choices. I’ve found myself reading more science fiction in the last three months than in the last 10 years. We’re all trying to find our own coping mechanisms and for me crime fiction is sometimes that but sometimes a busman’s holiday, hence sci fi.”

McKinty studied philosophy at Oxford University before emigrating to the US to become a high school English teacher. His books have won the Edgar Award, the Ned Kelly Award, the Anthony Award, the Barry Award and have been translated into over 20 languages. He lives in New York City with his wife and two children.