The Spinning Master was prescient, but not prescient enough, so I made it into a serial podcast 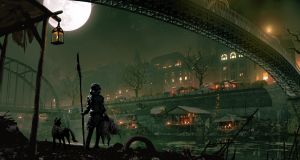 Nick Grey, illustrator and creative director of Idle Birch, illustrated The Spinning Master. He has made pieces of animated digital art that bring the story to life in a way that takes my breath away.

Several years ago, a doctor friend told me that a pandemic was long overdue. The medical world was waiting, braced for the next big thing. At a science-fictional level, the idea took root.

Two years ago, I began to write a book with a pandemic at its heart. As it turned out, the story was prescient, but not quite prescient enough. As I put the finishing touches to the text, the real-world virus was beginning to spread. When I finished it, the country was in lockdown.

It was a disorientating moment. I had described the ending of a fantastical world – an incurable virus, an environmental crisis, a set of economic circumstances collectively known as The Hardship – and it felt as though the future was nipping at my heels.

The Spinning Master is a story of a woman who travels to another world in search of her missing brother; an adventure of aliens, autism and video games. The story moves from dystopian Dublin, through even more dystopian Co Limerick, to the otherworld of Irish mythology and back again. It was born into a time of accelerated change.

Appropriate, in one way, for a fantasy novel but in other ways the timing was a spanner in the works. The physical world was in flux and, as I commenced the long, slow trundle towards publication, I realised that, with all the luck in the world, it would be years before the story became a book. There it is again. That word. Book.

Like most, maybe all, novelists, I had dreamt of a moment of exchange. The Spinning Master would leave my hands and be placed in those of a publisher. Preferably in return for cash. It’s a 20th-century capitalist model, but it is hard not to want it. And I do love books. I had always imagined that the story would manifest in the physical world as an oblong object with pages and a cover (preferably embossed). Something that you could put into people’s hands so that, through their reading of it, the story might take root. There’s another word. Reading. It assumes an interaction between the imagination and the eye.

Given the circumstances, I began to wonder whether there was another way of doing things. So many traditional approaches were being called into question, with people exploring alternatives that seemed much more interesting than sitting around waiting for normality to resume.

Having completed the draft, and sent it out in all the usual directions, I also sent it to my friends. One of these was Luke Clancy of Soundsdoable, who makes the RTÉ Lyric FM programme, Culture File. We’ve worked together on many radio projects and been friends for more than 30 years, but he objected to having to read my book.

Nothing personal, he explained, he just prefers to absorb fiction in an audio format. He also felt, correctly as it turns out, that there was an appetite for audio in the wider world. People are in need of entertainment and have the time to listen. And, because I have experience as a radio journalist and basic sound-editing skills, he thought that the story might work as audio episodes. I have a good voice to go to sleep to, he said kindly.

We devised a format. I would record myself reading The Spinning Master aloud, chapter by chapter, and send him the edited sound file. He would produce it under the Soundsdoable banner and release it as an Episodic Audio Adventure. It would be free to listen (the subscribe button does not bite) and there is no way of buying the book or accessing the completed audio in advance. At the time of writing even the producer does not know how the story ends, or even how it unfolds. The text is available to him, but he prefers the slow release.

The notion of free digital entertainment is very much of the moment. The idea that you might have to wait for something is not. It brings me back to the 1980s, where one waited for the latest teenage magazines. Or to a previous century when Charles Dickens’s serial cliff-hangers had American readers queueing the quaysides until the ship from England arrived with the latest updates. The twists and turns of his episodic novels – as shouted from the gangway – were, in many ways, the precursors of podcasts. And it also put me in mind of Scheherazade, whose life depended on keeping it interesting, night after night.

There is more than one precedent for releasing a story in bite-sized chunks. It occured to me that when a novel is neither a physical book, nor an e-book, nor even a finished audio book, that I was connected to a much older tradition of storytelling. In the story I describe an alien species, the Sí, who do not write their language, and that notion has deep historical roots. We have not always had books. We have not always had the ability to access everything that we want at once.

Had a publication deal been available to me in March 2020, I would have gone down that path. In that alternate universe, I would have missed so much! I would never have had the chance to ask Nick Grey, illustrator and creative director of Idle Birch, to illustrate The Spinning Master. He has made pieces of animated digital art that bring the story to life in a way that takes my breath away. Then there is the music. The magical tune that fades in and out of The Spinning Master is composed by Kevin Brew and performed by Aoife Nic Cormaic. And I would have missed the experience of reading a bedtime story to unknown readers. As it turns out, going incorporeal opens up new dimensions.

The Spinning Master has a sequel, one in which the story of its characters is resolved. The world is ending? Don’t worry, there’s a back-up! I wonder if there is in the real world too.
Listen to The Spinning Master