Abortion: the US shows what could be in store for Ireland 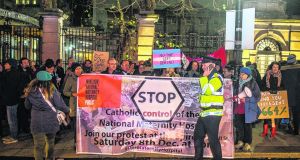 Women gather at the Dáil in Dublin to demand the right to free and safe legal abortion and to oppose the possible Catholic Church control of the National Maternity Hospital.Photograph: James Forde

The fight over Ireland’s Eighth Amendment touched a nerve in the United States. After all, more than four decades ago, Americans lived through a sweeping change to the nation’s abortion laws after the US Supreme Court’s Roe v. Wade decision invalidated most laws on the books and created a new right to choose abortion.

In May 2018, Ireland experienced a change that was just as explosive. Voters decisively chose to reject the Eighth and approve a law that guaranteed unrestricted access to abortion until the 12th week of pregnancy.

And now the Irish are the next to learn that changing the law is just the beginning of the story.

Since the repeal of the Eighth, US-style tactics have spread rapidly in Ireland. Crisis pregnancy centres, facilities that discourage women from having abortions, have tried to reach those seeking abortion. Pro-life protests, a regular feature of American life, have become a frequent sight.

Some might wonder why abortion foes in Ireland are taking a page from the American pro-life movement. Abortion in the United States is still legal. Efforts to reverse Roe have fallen short.

But a close look at what is going on in the United States could show what is in store for Ireland – and why formal changes to the law matter less than we might expect.

After Roe came down, abortion opponents in the United States first looked to pass an Eighth Amendment of its own – a change to the nation’s constitution that would have recognised a right to life. But the effort quickly unravelled. Even with a nominally pro-life president and Congress in place, abortion foes could not get the votes for something like the Eighth – and could not agree on an alternative.

Anti-abortion leaders pivoted. Rather than seeking to recognise a life, abortion foes would make the procedure harder to get. Abortion opponents aligned with the Republican Party to influence who sat on the Supreme Court and work towards a decision overturning Roe. And anti-abortion advocates had to come up with new justifications that did not ban any abortions at all. Rather than focusing on fetal life, the movement zeroed in on claims about what abortion in the US was really like – for women, for families, and for communities.

This strategy did not have the same emotional appeal as demands for a right to life, but it had one advantage: it worked. The Supreme Court began upholding some abortion restrictions. By 1992, the Supreme Court changed Roe, undermined protection for legal abortion, and made arguments about the reality of abortion even more important.

The justices adopted a new rule: abortion regulations would be unconstitutional only if they had the purpose or effect of unduly burdening a woman seeking abortion. This test force pro-choice and pro-life lawyers to argue about the effects of abortion restrictions – and abortion itself.

Anti-abortion leaders began emphasising the harm done by abortion. Some claimed that abortion increased the risk of suicidal ideation or breast cancer. Others sought to ban the most common or safe abortion procedures, claiming that there were viable alternatives. Pro-lifers insisted that if a question about abortion was scientifically uncertain, lawmakers should have more power to restrict abortion. The Supreme Court bought into this argument in 2007, and it remains potent today.

Recently, Donald Trump transformed the Supreme Court, creating a conservative majority many expected would eliminate protection for abortion. That majority has not delivered for the president, at least for the moment. Recently, the court voted to strike down a Louisiana law that required abortion doctors to have admitting privileges at a nearby hospital. But the majority adopted a new rule that gives lawmakers more room to restrict abortion. And states have already passed laws banning abortion at the sixth week of pregnancy or even fertilisation. The Supreme Court might consider these bans soon.

To outsiders, the evolution of abortion politics in the US might not look so bad. For the moment, the country has landed on a kind of compromise. Abortion is legal but not unregulated. States have to allow women to access abortion, but not without limits.

But the abortion wars in the US have only become more polarised. The right to life and the right to choose matter just as much as ever, but areas of disagreement have multiplied. Pro-life and pro-choice Americans now fight about the basic facts. Abortion opponents sometimes question the reliability of medical authorities, like the American College of Obstetricians and Gynecologists, accusing them of putting politics ahead of science. They claim that the media buries truths about abortion. Abortion opponents field their own experts, produce their own studies, and cite their own evidence.

Trump has forged a brand of politics that undermines the distinction between fact and ideology, labelling damaging stories “fake news” despite clear evidence that he is lying. His rise is part of a bigger transformation. The abortion debate has furthered the collapse of consensus about the difference between science and spin. Now, those on opposing sides view one another as deluded or dishonest rather than simply wrong.

Major political parties in the US win votes by deepening divisions about abortion-and party leaders are happy to breed distrust about what abortion really involves. It has never been easy to imagine a day when Americans would agree about abortion. Now, that kind of consensus seems more impossible than ever.

Regardless of what anyone thinks about the Eighth, the United States is a cautionary tale. Europeans have long puzzled over why US abortion politics have remained so dysfunctional years after a legal solution seemed to have arrived. The history of the decades after Roe offers one unfortunate answer. Distrust of public health experts, the media and the government has flourished. Political parties amplify the nation’s divides.

So if the Irish now talk less about the Constitution and abortion, that doesn’t mean that the nation will avoid the fate of the US. Americans have learned that lesson the hard way.

Mary Ziegler, a law professor at Florida State University, is the author of Abortion and the Law in America: Roe v. Wade to the Present (Cambridge University Press, 2020)