Sherlock Holmes facts you should know 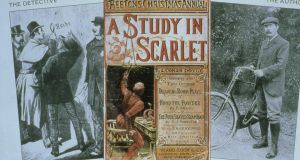 A reproduction of a copy of the book A Study in Scarlet by Sir Arthur Conan Doyle, December 8th, 1986. Photograph: Georges De Keerle/Getty Images

What’s in a name?
Sherlock Holmes and Dr Watson almost never were. In early notes written in 1886 for the first Holmes story, A Study in Scarlet, their creator, Arthur Conan Doyle, indicated the duo were going to be called Sherrinford Holmes (Sherrington Hope was another name under consideration) and Ormond Sacker (or possibly Secker – the handwriting is difficult to decipher). Thankfully, though, within a month or so, Sherrinford was cast aside for Sherlock and Ormond Sacker/Secker gave way to Dr Watson.

The original consulting detective?
Sherlock Holmes suspected he was the world’s first consulting detective, but a real-life counterpart had a strong claim to that title. About 1881, the German-born Wendel Scherer advertised his services as a private consulting detective in London. He was brought in to investigate what became known as the St Luke’s Mystery. A baker was said to have returned one night to his home in the St Luke’s district of East London, never to be seen again. Eventually, an employee of the bakery came under suspicion but was never convicted. Intriguingly, the bakers name was Stanger. The victim in the first Holmes story, A Study in Scarlet, was called Stangerson. Is it possible that the exploits of Wendell Scherer were in Conan Doyle’s thoughts as he created Holmes?

The legendary Langham
The Langham is one of London’s most famous hotels. On the evening of August 30 th, 1889, it hosted a legendary literary occasion. That night Conan Doyle dined there with a magazine editor called JM Stoddart and another writer – a certain Oscar Wilde. It was the first time Doyle and Wilde had encountered each other. Stoddart – a man with an eye for talent – was keen to sign up stories from them both for his Lippincott’s Monthly Magazine. Over dinner, he commissioned not only The Sign of the Four (the second Sherlock Holmes story) from Arthur Conan Doyle but also The Picture of Dorian Gray from Wilde. Not a bad night’s work!

Art in the blood
From the 1893 story, The Greek Interpreter, we know that Holmes was related to the Vernets, a famous real-life family of French painters. His grandmother, he revealed, “was the sister of Vernet, the French artist”. There were, in fact, three generations of Vernet painters so it is not entirely clear which one Holmes was referring to. It’s safe to assume that Claude Joseph Vernet (1714-89) is too old to have been Holmes’s great uncle (seeing as Holmes is thought to have been born about 1854). But his son Antoine Charles Horace (1758-1835), commonly known as Carle, could fit the bill, as might Carle’s own son, Horace Vernet (1789-1863).

Disrespecting one’s elders
C Auguste Dupin, Edgar Allan Poe’s fictional amateur detective who appeared in stories like The Murders in the Rue Morgue, is often regarded as Holmes’s literary forefather. Holmes, though, was unimpressed by him. In A Study in Scarlet, for example, he says: “Now, in my opinion, Dupin was a very inferior fellow.” This, though, was an in-joke by Conan Doyle, who was a great admirer of Poe. Conan Doyle regarded Poe as the best short-story writer of all time. “Where,” he once asked, “was the detective story until Poe breathed the breath of life into it?”

The end?
The last Sherlock Holmes story by Conan Doyle, The Adventure of Shoscombe Old Place, was published in 1927. But in 2015, an historian called Walter Elliot unearthed in his attic a long-lost Holmes story written by Conan Doyle back in 1904. A charming curio of just 1,300 words, it is called Sherlock Holmes: Discovering the Border Burghs and, by deduction, the Brig Bazaar. It featured in a short volume called The Book o’ the Brig to raise money for the restoration of a bridge washed away by flooding in the Scottish town of Selkirk. The story is built around an exchange between Holmes and Watson in which the detective displays his customary brilliance to deduce how Watson intends to spend his weekend. Not quite The Hound of the Baskervilles but still a little gem to find in the attic!

The adventure of the disappearing dog
When Holmes and Watson first met each other in the 1887 story, A Study in Scarlet, Watson is described as owning a bull pup. It was the only mention ever made of the dog across the 60 stories Conan Doyle published about the crime-fighting duo. The fate of the poor pup has intrigued Holmesian scholars ever since. One theory suggests the pet was referred to in symbolic terms, serving as an emblem of the low moods Watson suffered after his military career ended and he found himself penniless and homeless back in Britain. His bull pup, then, might be seen as rather like “the black dogs” of depression that plagued Winston Churchill.

A gambling man? You bet
Most people these days think of Dr Watson as Holmes’s dependable and straightforward companion, but Conan Doyle hinted that he had a serious gambling habit. In one story, Watson even admits to spending about half his military pension on the horses. Then there is a curious detail in The Adventure of the Dancing Men. Watson has been invited to make an investment but Holmes concludes that he is not keen to since “Your check book is locked in my drawer, and you have not asked for the key.” Why on earth should Holmes be guardian of Watson’s money? Because, we must assume, he cannot be trusted with it himself – almost certainly as the result of his penchant for gambling.

Heading for a Falls
By 1893, Conan Doyle had decided to kill Holmes off. The method he would use – Holmes would fall down an Alpine waterfall while grappling with his arch-nemesis, Moriarty – came to him during a stay in Lucerne, Switzerland. There he found himself in the company of a certain Rev WJ Dawson and Henry Lunn, who would become famous as the founder of a travel firm that became part of the Lunn Poly agency. According to Lunn, Dawson suggested that the Reichenbach Falls, near the town of Meiringen, would be a suitable spot. Shortly afterward, Conan Doyle visited the area and decided it was the perfect scene for the crime. Lunn later described himself as “an accessory before the fact” in the purported death of Holmes, while Dawson called himself “an unintentional accomplice”.
Sherlock Unlocked: Little-Known Facts About the World’s Greatest Detective by Daniel Smith is published by Michael O’Mara Books