Where the streets have no name: Google Maps, Israel / Palestine, Derry / Londonderry 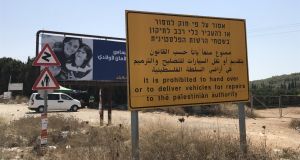 No entry for Israelis into Area A (Palestinian Authority controlled)

Many of us driving around today use GPS (global positioning systems) and Satnav (satellite navigation) technology in our car to help us get from A to B.

Whether it’s simply trying to find the quickest route to work, figuring out how to get to some new out-of-town DIY box store or typing in that forgotten address of a distant relative, a lot of us have grown familiar with, if a little dependent on, the calming voice and little magical map in the car.

Some apps like Google Maps are best described as top-down technology. Others like the app Waze are user-driven, the more people using it the greater the information on traffic and travel times, as users’ information is downloaded over the local mobile telephone network. Waze describes its app as a “community-driven GPS navigation app, which is free to download and use”.

Whatever the app or whatever the reason we use it, we tend to take for granted that it’s impartial, necessarily objective, and logical in its algorithms. We tend not to assume it’s a geography with a built-in political bias, that it’s telling us more, or indeed less than we might have ever assumed.

At times, however, in certain places, the local geography becomes strangely mysterious. Some destinations are either invisible or unknowable. Whole towns and cities are apparently “lost”, unreachable or simply don’t exist.

In Tel Aviv when you type in the town of Pedu’el, a town of 1,800 people, Google Maps will tell you that Pedu’el is a 43-minute drive along route 5, directly east from the centre of Tel Aviv. Type in the slightly larger next-door town of Deir Ballut, population 3,000 and Google Maps nonchalantly and somewhat mysteriously states “Sorry, we could not calculate driving directions from Tel Aviv-Yafo” to “??? ????”.

The immediate clue of course is that the reply is partially in Arabic. Deir Ballut is a Palestinian town. Pedu’el is an Israeli settlement. Both are in the West Bank.

Both towns are just 25km – as the crow flies – directly east of Tel Aviv and are just one kilometre apart. There is one critical navigational difference.

The Israeli separation barrier surrounds Deir Ballut on three sides, so logistically it isn’t so easy to drive from the centre of Tel Aviv to the centre of Deir Ballut. The drive may be difficult and circuitous, but Google Maps simply refuses, is unwilling or unable to tell you how to navigate that journey or tell you how to find your way around the Israeli separation barrier.

It’s not as if Google Maps is not sensitive to other local political geography.

Google Israel does not, however, tell you when travelling from Tel Aviv to Pedu’el you are crossing Israel’s recognised international border (the 1949 Armistice or Green Line).

The Israeli and almost exclusively Jewish settlement suburb of Alfe Menashe, home to 8,000 people (about 18km northeast of Tel Aviv) has more than 60 individual streets names identified by Google Maps.

The next-door Palestinian city of Qalqilya, home to 45,000 people, the largest West Bank Palestinian or Israeli city within a 10km radius of Alfe Menashe, would appear to be a rather placeless or nameless city.

There are no street addresses in Google Maps of Qalqilya at the same scale of map that shows 60 individual street names in Alfe Menashe. Qalqilya’s streets appear as a massive network of blank white roadways devoid of place names, with the single exception of a “main street” (written in English).

The streets of the nearby Palestinian town of Hable are equally nameless. In fact, all Palestinian cities in the West Bank in the immediate vicinity of Alfe Menashe are mysteriously stripped of their street identities. Perhaps a nameless West Bank Palestinian city geography has no particular meaning or significance for Israelis.

Israeli citizens are after all legally forbidden to visit or access Palestinian cities (Areas A, under the Oslo Accords).

“No Name” territory is a simple natural extension of “No Go” territory. The forbidden becomes invisible, the invisible simply forbidden. This is subliminal faceless geography. Places with no names become non-places. By extension, forbidden non-places have nameless nobodies living in them. Invisible and nameless, they are a risk of becoming a dehumanising geography.

Interestingly it is the Israeli-designed “Waze” and not “Google Map” that warns Israelis, when they type in Deir Ballut – “Caution. This destination is in a high-risk area or is prohibited to Israelis by law”.
This article is adapted from Seamless Neighbourhood: Redrawing the City of Israel, by Paul Kearns and Motti Ruimy, published by Gandon Editions. The book will be launched by architect and author Niall McCullough at the Irish Architecture Foundation, 15 Bachelors Walk, Dublin 1 on Thursday, March 21st at 6.30pm.