Manual for Survival: A Chernobyl Guide for the Future review 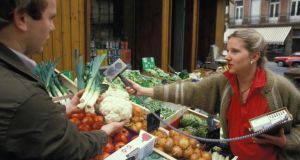 Radioactive fruit: If the health impacts of Chernobyl’s fallout became clear, this might provoke awkward questions about the fallout released by decades of nuclear tests.

Book Title:
Manual For Survival: A Chernobyl Guide to the Future

Chernobyl tourists might feel a quiver of déjà vu as they snap yet another photo of broken dolls and artfully arranged gas masks. The exclusion zone is now a popular destination and offers vending machines, fridge magnets and endless Instagram opportunities, but nuclear historian Kate Brown argues these visitors are missing the truth about Chernobyl which is not to be found in its photogenic ghost towns.

To believe the reality of Chernobyl lies in the vicinity of its infamous nuclear plant is to fall into what Brown calls the “proximity trap”. The radiation which spewed from Reactor No 4’s wounded mouth in brilliant blue light didn’t poison the surroundings in a neat circle. The fallout struck the land in lethal splats and blotches as radioactive particles travel with the wind and descend with the rain, but can also be transported on people, cattle and produce. To draw a crooked line around the reactor and call it the exclusion zone is to dismiss what is happening beyond that line.

This thrilling, frightening book tells the truth about the Chernobyl disaster and shows its dreadful impact cannot be contained within an artificial border.

Consider the 200 ladies working at the wool factory in Chernihiv. This lovely city in northern Ukraine is a comforting 80km from the reactor, yet they were given the status of “liquidator”, a heroic title associated with the men who fought the nuclear blaze. Why? Brown hires a car and is soon at the factory making an admirable nuisance of herself. She learns the ladies’ task was to wash and sort wool, and when batches began arriving from some of the 50,000 sick animals slaughtered in the Chernobyl aftermath, they processed this “ragingly hot” wool without knowing that “picking up the most radioactive bales was like embracing an X-ray machine while it was turned on”. Many fell ill with nosebleeds, dizziness and scratchy throats. Some died of leukaemia. The Soviet authorities were reluctant to destroy this deadly wool when there were production quotas to be met, so they stacked the worst bales in the factory grounds in the hope its radioactivity would fade. The bales grew higher, baking in the sun, “gamma rays pulsing from the heap”, before Moscow relented and allowed it to be buried in deep pits.

Yet the narrative remains that it’s the spooky exclusion zone which is to be feared. Brown shows this is absurd as Chernobyl’s impacts creeps far beyond its border, and she explains why it has been so hard to get simple facts about the world’s worst nuclear disaster.

The Soviet Union covered up the truth as they were locked in a race with the US, not just for nuclear weapons, but also for nuclear power. When the union finally collapsed, any truth which tried to emerge was tainted by politics as interested parties used Chernobyl to “rattle the can” for financial gain, or to attack communism. This is predictable enough, but Brown also shows the worrying complicity of agencies like the UN and the WHO, arguing there was “an international scramble to control the message” of Chernobyl as authorities did not want public anxiety to dent nuclear power – or nuclear testing – programmes.

If the health impacts of Chernobyl’s fallout became clear, this might provoke awkward questions about the fallout released by decades of nuclear tests. Truth was also masked by the inconvenient nature of radiation-induced death: it was easy to see the Chernobyl firemen had died of radiation sickness, but what of the thousands who died later? Victims succumbed to “a complex of illnesses swarming their bodies like a murder of crows”, and with lax Soviet record-keeping these deaths couldn’t be easily pinned on Chernobyl. The official death toll is 54. Brown says it could be as high as 150,000.

The book contains such appalling revelations that it feels like a thriller, although this wanes in the latter sections when Brown talks of science and data gathering. This produces a book which feels like origami in reverse: we start with an incredible, intricate creation which then flattens itself out. Yet it remains the most brilliant and essential book on Chernobyl since that of Nobel Prize winner Svetlana Alexievich.

Brown ends the book blueberry-picking in the Polesian forests where “hot” berries are simply mixed with clean so the punnets may lawfully enter the EU. By gradually stripping the forests of its contaminated fruit, Brown says “the child pickers with lips stained blue are actually nuclear waste workers”, and a truck carrying such fruit was once halted at the US/Canada border as its load emitted such radiation staff feared a “dirty bomb” was inside. In this quiet manner, Chernobyl makes its way to your muffins and muesli, yet we’re encouraged to believe its danger belongs only to the Instagram daredevils trudging through the Zone.