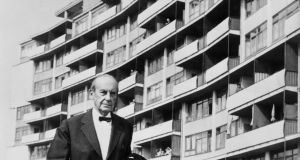 “Biography as I’ve come to see it is a slow-burning process of the making of connections.” In 1964 the slow burn began with a chain of events that would lead Fiona MacCarthy to a chance encounter with architect and founder of the now famous Bauhaus design school (literally the House of Building), Walter Gropius. Gropius was arguably one of the most important figures in 20th century design and is the subject of her latest book: Walter Gropius Visionary Founder of the Bauhaus.

The chain of events began with a chair. In a London department store, the folding plywood curves of the Isokon Long Chair, designed by Marcel Breuer, a colleague of Gropius’, following the suspension of production during the war, were once again on display. At the relaunch of this design icon was modernist design entrepreneur and patron Jack Pritchard. Pritchard made the acquaintance of MacCarthy who, eight years later, with Breuer sat at a plywood table in the Isobar restaurant, also designed by Breuer. The next day, at a private viewing of the Bauhaus exhibition in London, Pritchard introduced MacCarthy to 85-year-old Gropius, who the following year, after a short illness, in Boston, Massachusetts, would die in his sleep.

The brief encounter had a lasting effect. The seed of a question was sown. A question that over the next half a century would continue to echo. As others gave their differing opinions on Gropius – “egotist”; “humourless”, “the so-called great architect who was unable to draw”, “self-publicist” – a single question for McCarthy remained: Who is Walter Gropius? After a 55-year slow burn, the question finally surfaced in the form of MacCarthy’s meticulously researched, balanced and brilliantly written biography.

For MacCarthy, answering the question is as much about telling the story of Gropius as it is about sifting through the layers of noise that have built up around his name over the years. MacCarthy’s poetic archeology restores Gropius to his rightful place – carefully sifting through the complex topography of an anything-but-simple life, filled with the trauma of both world wars, affairs, lovers, the tragedy of his daughter Manon’s death, brushing shoulders with the Nazis, and the obvious pressures associated with becoming one of the most important architectural thinkers of the 20th century.

Throughout the book (just short of 500 pages) MacCarthy challenges views that have gathered credence over the past two decades that Gropius was little more than a po-faced doctrinaire modernist, sympathetic to the Nazis, who thoroughly deserves his place in architectural history as the whipping-boy responsible for the heinous architectural sins of those who invoked his spirit.

For example, by the time I first stepped foot in a school of architecture in the early 1990s, the long shadow cast by Gropius over architectural education had significantly shortened. Modernism had found a new friend, or foe, depending on which side of the architectural fence you stood. The prefix “post” had been added to modernism. This new architectural epoch would come to mean many things, all of which had one thing in common: not modernism. It was a movement founded on a negation, an anything-but manifesto, anything but the concrete tower blocks riddled with damp and crime and the inhuman brutalist monstrosities of the messiah complex architect who would have us all living in machines designed with the perfect human (read man) in mind conforming us to the perfect (their perfect) way of life. This, as MacCarthy painstakingly reminds us through her near forensic, but nonetheless deeply personal, analysis of Gropius’s life is a myth. Perhaps, as architectural writer Mark Wigley suggests, the often stark and plain designs of Gropius and his modernist contemporaries were a kind of antidote to the catastrophic horrors of war that so many of them witnessed.

Gropius, deeply affected by his experiences in the first World War, suffered from what we now know to be post-traumatic stress syndrome. This most inhuman of experiences was, as MacCarthy writes, instrumental in shaping a design philosophy that sought the democratisation of design so that the humanising forces of craft and art might, once again, become central to architecture, while fusing together “art and technology for the transformation of the modern world”. Architects and developers would do well to return to Gropius’ basic requirements for the planning of houses: “daylight, fresh air, sunshine, tranquility, limited population density, good accessibility, rationally designed, convenient apartment interiors, pleasant overall ambience.”

MacCarthy refuses the often ill-researched reductionist characterisations of Gropius as the arrogant, dour modernist. Instead, she passionately weaves a gripping and powerful narrative deserving of a wide audience while also making for essential reading for anyone studying architecture and design.