Illustrators who refuse to be left out of the picture

Fed up of her work going uncredited in children’s books, Sarah McIntyre decided to act 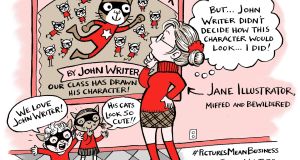 Sarah McIntyre’s Pictures Mean Business. Pictures “make stories come alive for children. When children pull a book off the shelf that they can’t read yet, they choose the book for the pictures.” Illustration: Sara McIntyre

In January, leading industry magazine The Bookseller published a chart listing the top 20 illustrators in the UK in 2018. Tony Ross, who has created the visual stories for David Walliams’s books, took the top spot. Axel Scheffler, who has illustrated dozens of Julia Donaldson books, is number two, while Jeff Kinney, who draws his own pictures for Diary of a Wimpy Kid, completed the top three. These sort of charts are always big news in the publishing industry, quantifying sales and creating a tangible record of popularity that boosts the profile of those included. The very existence of the illustrators’ chart, however, is in itself noteworthy. This is only the fourth year that The Bookseller has compiled the chart, after years of campaigning by illustrators to be credited for both their work and the value of their work in the publishing economy.

Sarah McIntyre was the writer and illustrator who spearheaded the informal lobbying group. In 2015, she created a canny campaign called Pictures Mean Business to address the challenges faced by illustrators in the children’s publishing industry. The impetus came from personal experience. In reviews of books she had illustrated for well-known writers, she noticed that “very often I’d get cut out entirely, both my work and my name”. She realised this was a recurring problem for many of her illustrator colleagues too, where “their names were left off the front covers of highly illustrated books they’d spent months working on”.

Travelling across the UK for promotional duties, McIntyre also became aware that children, parents and teachers seemed to have “absolutely no concept of what an illustrator adds to a picture book, or find it remotely important, or relevant”. McIntyre thought people were “missing a key source of inspiration by downplaying illustrators and drawing”. To her mind, pictures “make stories come alive for children. When children pull a book off the shelf that they can’t read yet, they choose the book for the pictures; reading goes from something that can be difficult or tedious to something instantly magical. Children’s visual choices were being discounted, even though [these] tastes are influencing which books sell in large numbers.”

At this stage McIntyre had begun working with the writer Philip Reeve, co-authoring a series of middle-grade readers that would go on to great success. Their first collaboration, Oliver and the Seawigs, was longlisted for the Carnegie Medal award, but only Reeve’s name appeared on the nominee list. McIntyre wasn’t convinced that she would be able to make people care. As she explains, previous challenges to this almost-standard slight of the illustrator “appealed to people’s emotions, asking that people respect illustrators by crediting them properly”. An apology would issue but nothing would change. “So I thought we needed to take a different tack. We needed to appeal to publishers right where they were making decisions, on the business level – money. We needed to take a positive approach, showing people in the book industry how they would financially benefit by crediting illustrators properly. Unless [our] work is assigned financial value, to all intents and purposes, it’s worth nothing.”

McIntyre was joined by fellow illustrators James Mayhew and Soni Speight, who began to investigate the financial contribution of illustration to the publishing industry. Immediately, they realised there were large gaps in the data available to them.

“Without sales data,” McIntyre knew, “illustrators are assumed to contribute nothing to the economy, and therefore the industry can ignore them.”

Their very first concrete objective, then, was to “chase the data”, imploring publishers and booksellers to ensure that illustrator data is included in the information they log with Nielsen, so the data service agency could aggregate it. Concrete changes – including a more diligent approach to data-collection, presented in the now-annual top illustrators chart – soon followed. The profile, status and economic value of the profession was almost immediately raised, and continued pressure has yielded other successes. In 2018, for example, illustrators were recognised with their own category at the British Book Awards. (The speech made by the inaugural winner, Julia Donaldson’s German collaborator Axel Scheffler, in which he condemned Brexit, drew widespread attention in the press, underlining the fact that illustration was not just child’s play.)

When I do a solo picture book, I can’t always tell if people are taking the pictures into consideration, but at least I never get left out

Pictures Mean Business has had a profound change on McIntyre’s own work too. She continues to make books with Philip Reeve, in a collaboration that epitomises the idea of co-authorship: they come up with the characters and stories together; Philip brings life to them with words, McIntyre with pictures. Their latest work, The Legend of Kevin – about a roly-poly biscuit-eating flying pony – is perhaps their best yet. However, the Pictures Means Business campaign made McIntyre realise she “wasn’t making as much progress in my career as I would if I worked solo”. So she began to generate projects on her own too; her fourth solo book project, Grumpycorn, will be released in May.

“When I do a solo picture book,” she says, “I can’t always tell if people are taking the pictures into consideration, but at least I never get left out. Writers should cotton on to this,” she says by way of wry conclusion. “It’s in their interest to keep illustrators happy, otherwise we’ll all think we need to write our own books.”

Sarah McIntyre and Philip Reeve will be appearing at the Mountains to Sea dlr Book Festival on Saturday March 30th. The Legend of Kevin is published by Oxford University Press. Grumpycorn is published by Scholastic on May 2nd.

Five illustrators you know, even if you don’t know it

German-born Scheffler, who trained at the Bath Academy of Art, is best known for his work with Julia Donaldson. With his distinct cartoonish figures and vivid colour pallette he has brought to life the purple prickle-backed Gruffalo, the friendly Witch from Room on the Broom, The Highway Rat, The Smartest Giant in Town and more, in 22 collaborations that have sold more than 48 million copies worldwide. He is also beloved by toddlers for his solo series featuring the rabbit and mouse friends, Pip and Posy.

In the days before middle-grade readers were heavily illustrated, Quentin Blake’s swift angular pencil sketches were bringing life to the stories for readers of Roald Dahl. So iconic were these characterisations that Blake must be almost entirely responsible for the vastly overrated David Walliams (whose first two titles he illustrated) being dubbed the new Roald Dahl. Blake has created more than 30 original titles too, and his signature has become as recognisable as his figurative style.

Almost every anthropomorphised animal you have ever seen can trace its way back to Beatrix Potter, whose romantic watercolours defined many a childhood in Britain and Ireland, and whose work still permeates popular culture today. Potter was a clever businesswoman too, and she knew the power of turning image into material merchandise that would sell and sell. So you might not know the books, but what about the china and chintz?

Carle was working as a designer when his work was spotted by writer Bill Martin, who invited him to collaborate on the 1967 book Brown Bear, Brown Bear, What Do You See?, a title many a parent and child can recite by heart. Carle graduated immediately to creating his own work, publishing his second, most famous title, The Hungry Caterpillar, two years later. A layered collage-approach and distinctive cut-out features were truly innovative and are much-imitated today.

You may know him for his religious windows, but Clarke was also an illustrator, bringing glorious, bejewelled life to the fairytales of Hans Christian Andersen and Charles Perrault, among others. In his work on paper, he developed his inimitable figurative style and his passion for rich colour even more. Across both media, meanwhile, an atmosphere of tragedy and fantasy are deeply intertwined.