The actor, singer and activist flew to London for a 1937 benefit concert in aid of the Spanish Republic 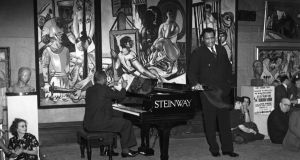 In 1937, the world-famous African American performer and activist Paul Robeson was holidaying in the Soviet Union when he received a plea to support an anti-fascist fundraiser in London’s Royal Albert Hall. By then, much of the British intelligentsia was backing the Spanish Republic’s struggle, so that the event was endorsed not only by the labour movement but also by writers, artists and musicians: WH Auden, Cecil Day-Lewis, Stephen Spender, Rebecca West, HG Wells, Virginia Woolf and many, many others.

Everyone recognised why Spain mattered. Franco’s fascists relied on Hitler and Mussolini for supplies and modern equipment. While the Soviet Union aided (to some extent) the Republic, the neutrality of Western powers signified, for progressives, flagrant appeasement. After all, the Nazi support for the Nationalists represented more than mere ideological affinity: Spain possessed resources crucial for German rearmament, and the fight against the Republic allowed Hitler to perfect new weapons and new tactics. The war was thus an obvious precursor to something much worse.

Every artist, every scientist, every writer must decide now where he stands. There is no standing above the conflict on Olympian heights. There are no impartial observers … The battlefront is everywhere

For that reason, it also offered a last chance to halt fascism’s advance. Much to the surprise of the Spanish generals, popular resistance had pushed back the coup in Barcelona and Madrid, forcing the Nationalist armies to regroup in the provinces. And when Dolores Ibárruri, the Republic’s famous La Pasionaria (“the Passionflower”), shouted, “No pasarán!” (“They shall not pass!”), she was understood as urging a stand against fascism not just on behalf of the Spanish but also for everyone threatened by Hitler and Mussolini and all the imitative fascist movements across Europe.

The most dramatic response came in the shape of the International Brigades. In 1936, the Comintern, the Moscow-based leadership of the communist movement, proposed an anti-fascist volunteer army. Eventually, more than 40,000 people enlisted in the Brigades: soldiers drawn from some 50 nations, in the most diverse army in history. The vast majority were ordinary workers – usually, but not always, communists.

For progressives, the Spanish Civil War represented almost a generational test: a chance to fight not for the “old lie” of 1914 but for democracy, freedom, and fraternity. As the Irish poet Louis MacNeice explained, Spain was where “our blunt ideals would find their whetstone”. That was Paul’s sense, too. His discovery of the working class rekindled his optimism after his illusions in respectable Britain had been shattered. But Spain, where revolution and reaction contested openly, raised the stakes higher. In Spain, the battle had been joined; in Spain, Europe’s fate would be settled.

Here was a cause worthy of Paul’s mighty talents.

For the Albert Hall rally, he had at first intended to record in a Moscow studio and broadcast the message to London via radio. But Nazi Germany threatened to jam the transmission, while the Albert Hall management expressed a disinclination to receive communications from Red Russia. That joint opposition – so redolent of the tacit alliance between fascism and liberal democracy – infuriated him. He made the recording anyway, conscious of the huge audience the airwaves could reach – and then caught a special flight back to England. “Nothing,” he said later, “was going to stop me from sending or giving my message to the British public on the subject of Spain.”

That evening, the stage was studded with celebrities. For the British artist William Townsend, sitting in the audience, there was no question as to who left the biggest impression. Robeson, he said, “was the great man of the evening … his personality eclipsed all others as his speech overwhelmed theirs”.

Fascism fights to destroy the culture which society has created; created through pain and suffering, through desperate toil, but with unconquerable will and lofty vision

By then, Paul’s formal study of oratory had been honed by years of theatrical and concert stages. When he spoke, people listened. “Fascism,” he told the massive crowd, “fights to destroy the culture which society has created; created through pain and suffering, through desperate toil, but with unconquerable will and lofty vision.” The argument possessed particular force because of the man making it. Paul’s people knew about desperate toil, yes, and they knew about pain and suffering. If anyone had the right to scoff at the civilising pretensions of European culture, it was the son of a slave, a man denied basic rights in the most advanced of democracies. Yet here was Paul urging a defence of those achievements, not so much for what they were but for what they might become.

“Every artist, every scientist, every writer must decide now where he stands. He has no alternative. There is no standing above the conflict on Olympian heights. There are no impartial observers … The battlefront is everywhere.”

It was another of the moments that Paul produced so regularly, an occasion that the men and women in attendance remembered for the rest of their lives. His speech, delivered with characteristic sincerity, embodied what they took to be at stake in Spain: all that was good and decent and honest pitched against all that was barbaric and cruel and backward.

The applause went on and on and on.
This is an extract from No Way But This: In Search of Paul Robeson by Jeff Sparrow ( Scribe), which Peter Murphy reviews in The Irish Times on August 19th