This collection of memories and musings by the author Aidan Higgins feature such names as Beckett, Grass and Pinter, and open a window into the internal world of the writer 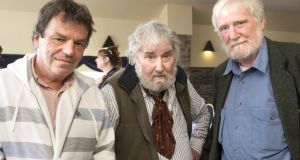 This book is a rich compilation of a variety of writings by the late Aidan Higgins – views, impressions, pen pictures, diaries, lectures, memories and musings – and, as is the nature of miscellanies, the pieces earn their keep in different ways. Some, such as recollections of encounters with renowned contemporaries such as Günter Grass and Harold Pinter obviously have a documentary value (and, speaking of this type of material, there’s a priceless passage featuring the great Polish poet Zbigniew Herbert and a couple of hausfraus). Other, briefer pieces are welcome reminders of Higgins’s attentiveness to transience, his ability to acknowledge a moment’s passing while at the same time retaining in his mind’s eye all its particulars.

Also included here are items which have appeared in earlier Higgins works, now freshly visible in the light of their new location. And, although categorising the contents of March Hares doesn’t do justice to its contents, either individually or collectively, some pieces are certainly more noteworthy for their quality and interest than others. Among these, “Introduction to Minihan Portfolio” and “The Bosky Dew”, introducing a catalogue of Patrick Collins paintings, stand out, and, in an entirely different register, so does the final, unsparing “Concluding”.

The Minahan essay is the most sustained of March Hares’ reflections on Beckett. It is not surprising that Higgins should dwell on his literary “old father, old artificer”. Many of these remarks come up in the course of various talks and panel discussions included here. In one way, Higgins’s contributions to such occasions depict him as a fully fledged member of the Irish republic of letters. But in all the most important ways he comes across as not that at all; or rather, if he is attached it’s by means of his focus on that republic’s exiled members – external (Joyce, Beckett) and internal (Flann O’Brien, about whom there are some intriguing comments regarding invisibility). Higgins made no bones about being both; as he says, “To feel out of place is, to be sure, quite a salubrious state for a writer to find himself in.”

If he had to choose between being either a goose of the domestic or the wild variety, though, it seems he would have chosen the latter, and indeed gives several pointers towards this conclusion. One is simply the history of his roving and reading that incidentally emerges in the course of March Hares. In addition, he rightly describes his novels (like those of his avatars) as being “as far removed as possible from the cosily familiar”, the “blandness” of which he sees as the bane of Irish fiction – apropos of which, by the way, Higgins also emphatically declares that “Langrishe, Go Down is not a Big House novel, nor was ever intended as such”.

And in the third place, Higgins sees a strong political dimension in the external exiles’ careers, not only in his emphasis on Beckett’s membership of the French Resistance but in the sharp words directed at the government of the day concerning the murder by Nazis of Joyce’s friend Paul Léon. In their way, the republication here of letters to The Irish Times stating his attitude to the Troubles not only invoke, in their way, this political lineage but portray another facet of the general sense of resistance Higgins embodied.

This general sense, also evident in March Hares’ provocative judgments, its indifference to being perhaps “behind the times”, its satirical strain, its appreciation of difference, its high regard for courage, the giving of the self in love, ensures that, although its ostensible concern is with the culture and to a lesser extent with the business of writing, its ultimate preoccupation is with writers. Or, rather, you can’t have one without the other. And this is as much the case with Higgins himself as it is with those he most admires, so that over and above those worthy predecessors, there is also the interest of March Hares in its totality as an essay in autobiography. Seen from that angle, the book is an even more unabashedly autobiographical work than Higgins’s other path-breaking works in the form, the last word in a series of increasingly risky and valuable works which collectively reveal that “life is a story told”.

But let’s not mention the last word. Let’s hope, instead, that there is more Higgins to come – a few further soundings, perhaps; or better yet, maybe a collection of letters?