Here and Gone review: Raising hell in Arizona with a gripping thriller 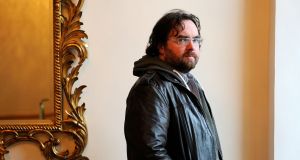 An award-winning author of crime thrillers set in Northern Ireland, Stuart Neville publishes his eighth novel, Here and Gone, under the open pseudonym of Haylen Beck. The story begins with Audra Kinney on the run from her abusive husband, Patrick; when Audra is pulled over for a routine traffic stop near the small town of Silver Water in Arizona, she is arrested on a trumped-up charge of marijuana possession and separated from her children, Sean and Louise. Held overnight until charges can be brought, the distressed Audra asks the arresting officer, Sheriff Whiteside, where her children are:

‘What children?’ he asked.

It’s a variation on every parent’s worst nightmare, not least because the reader subsequently learns of an internet forum on the “dark web”, wherein a number of men are eagerly anticipating the arrival of “the goods”, “a pair in good condition” who will provide the “entertainment” for an evening’s depravity.

With the reader aware that the clock is ticking, the scene is set for an adrenaline-fuelled tale of gritty heroism, as Audra – helpless in Sheriff Whiteside’s custody, suspected of murdering her children by the FBI, and already convicted by the court of public opinion – struggles to overcome impossible odds in a desperate bid to save her children.

It’s a high-concept tale to rival Neville’s debut, The Twelve (2009), in which an ex-paramilitary, haunted by the ghosts of those he was ordered to murder, sets out to avenge their deaths. While Here and Gone is equally absorbing, the new nom-de-plume and the Arizona setting aren’t the only radical departures for Neville. In a sense, he has had to reconfigure his entire mindset vis-à-vis the crime genre, in the process illuminating the essential difference between the hardboiled crime novels originating in the US and the mystery novels of those – the recent Scandi noir phenomenon included – from this side of the pond. Where Sherlock Holmes, Miss Marple, Lord Peter Wimsey and most of the other amateur sleuths of the UK’s golden age of mystery writing were happy to collaborate when necessary with the local police force, Dashiell Hammett’s Continental Op and Raymond Chandler’s Philip Marlowe frequently found themselves at odds with the establishment and at the rough end of a brutal justice meted out by corrupt police forces shoring up a rotten system, a state of affairs that reached its apotheosis in Jim Thompson’s first-person account of the deranged deputy sheriff Lou Ford in The Killer Inside Me.

Hailing from a former colony, Irish crime writers get to have their cake and eat it too, presenting the police as agents of oppression and terror when it suits, but also culturally attuned to tapping into the classic British perception of PC Plod as the flat-footed but utterly dependable avatar for law, order and justice.

It was in utilising the latter perception that the Belfast-based Neville established a considerable international reputation on the basis of a series of loosely linked police procedurals set in Northern Ireland, in which the protagonist, most recently DCI Serena Flanagan and previously DI Jack Lennon, were diligent professionals who – their personal demons notwithstanding – did their best to protect and serve the civilian population. In Haylen Beck’s Arizona-set Here and Gone, however, the police are not only mistrusted as the corrupt representatives of system of law and order heavily weighted towards the rich and privileged, but are to be feared for proactively seeking out the vulnerable in order to facilitate a monstrous appetite.

The result is a novel that combines the propulsive narrative drive of Lee Child with Michael Connelly’s deceptively understated, muscular prose, a thriller that also blends into its potent mix a strong flavour of both the domestic and rural noir sub-genres, the former as a consequence of Audra’s intensely emotional quest to be reunited with her children, the latter courtesy of Neville/Beck’s beautifully detailed descriptions of the remote and parched Arizona landscape. All told, Here and Gone is, even allowing for the inevitable hyperbole, not only a genuinely chilling and thrilling read, but a fascinating snapshot of Irish crime fiction’s ability to straddle the classic strands of US and British crime fiction.

Declan Burke is an author and journalist. He is the editor of the short story collection Trouble is Our Business (New Island Books)