Back to the border to set more prisoners free

Shane Connaughton swapped Cavan’s turfy lakes for Hollywood’s Pacific Ocean long ago but 28 years after A Border Station, he has written a sequel 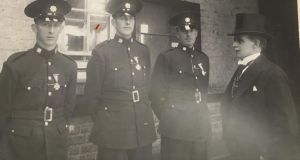 My grandmother left five pounds in her will to be given to me on the day I became Pope. As yet I have been unable to claim it. I haven’t given up hope. The world throws up the most unlikely events.

Granny’s wish certainly left me prone to fantasy. Imagination. I was bitterly disappointed when Grace Kelly decided to marry Prince Rainier of Monaco. He was only 5’ 4” whereas I was 6’ 1”. I was also let down by never being in a position to score a last-minute goal for Cavan in their sixth All-Ireland final success. I haven’t given up hope on that one either.

Fantasy led me to the theatre and that to writing. I wrote many plays but always in my mind, for years waiting to be released, were the many characters and events of what became A Border Station. As my father lay dying I started writing.

Though there are a lot of years between the two books, the passion, the urge, never wavered. I had men and women in my mind aching for their stories to be told

I wanted to tell my family, my friends, the world, what it was like living in a Garda barracks along the Cavan/Fermanagh border in the 1950s. What the feeling of the place was like, the people, the different religions, the politics but above all what it was like living with and watching my mother and father as they tried to make sense of their strange days and nights in a very strange place.

No one had asked me to write that book. It was something I just had to do. I sent it to the publishers, Hamish Hamilton, and a few short days later received a letter saying they were going to publish it. Bingo.

Extraordinarily, I next found myself in Hollywood writing films and swimming in the Pacific when before that I only ever swam in turfy Cavan lakes. What a ball!

I always knew, though, I had more prisoners to set free. That’s where Married Quarters comes in.

Though there are a lot of years between the two books, the passion, the urge, never wavered. I had men and women in my mind aching for their stories to be told. From a more mature point of view than the boy in A Border Station.

I was a teenager in search of philosophy and a girl. That’s what Married Quarters is about. The teenager who was me, still is, saw the meaning of life in the chaotic grasp of the Garda who came to serve under my father. They too were looking for the secret of existence. They were also looking for excitement.

In the book, the Garda sergeant father tries to keep a legal lid on life and hopes that before he retires he’ll get to solve one good murder. Despite an IRA campaign erupting along the Border and no end of smuggling, the only crime he could with regularity get his hands on was farmers letting their donkeys go the road unshod and drunks riding bicycles at night without brakes or lights.

What could he do with a man waiting for his pension and his gratuity, determined to blow most of it on drink, whilst his wife and children lived in danger of homelessness?

How could he save the career of the young Garda who was caught redhanded smuggling contraband for a local “importer-exporter”? And what about the man who in full uniform interrupted a circus performance by entering the circus ring and singing The Banks Of My Own Lovely Lee and throwing his cap up at the trapeze?

What about the elderly Garda with the beautiful young wife? ( “Grace Kelly on a bicycle.” )

What about the priest and his voluptuous housekeeper?

What about Lady Sarah Butler-Coote, a last relic of grander days, living in a crumbling mansion whilst a burglar lives, unbeknownst, in a room downstairs?

The teenage boy finds himself enmeshed, often hilariously, in all their lives. Their frantic lives. The desperate days and nights. When truth emerges, it is often hard but rarely bitter. Bitter is negative in an outrageous comical cosmos.
Married Quarters by Shane Connaughton (Penguin Ireland, £13.99) is this summer’s Irish Times Book Club selection. Over the next few weeks, we shall publish a series of articles exploring the author and his work, culminating in a podcast in which he discusses his career with Irish Times Books Editor Martin Doyle