Paradise Lost: A Life of F Scott Fitzgerald review – Behind the poster boy 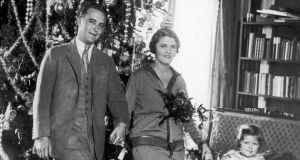 In our boom and bust era, the personal trajectory of a writer like Scott Fitzgerald is readily understood. Fitzgerald’s great success, both financial and artistic, at a very early age, coincided with the major shift in American social history that occurred in the wake of the Great War. The 1920s was a decade when it seemed all of America partied, and then toppled in 1929 into the maw of the Great Depression. Fitzgerald had published This Side of Paradise at the age of 23 and followed it only five years later with The Great Gatsby. He was a regular contributor to the popular Saturday Evening Post and becoming a household name. Soon he was to become the explicator of that massive generational shift, the new zeitgeist, to both the older generation and to many of the equally baffled young. All this would suggest that Fitzgerald was an embodiment of the characteristics of the new age, both societal and personal.

David S Brown argues that Fitzgerald was a nostalgic believer in a code of honour, diligence and moderation characteristic of the antebellum south

David S Brown’s new biography of the author argues strongly that Fitzgerald was temperamentally far from the jazz-age poster boy he was seen to be, but rather a nostalgic believer in a much earlier code of honour, diligence and moderation characteristic of the antebellum south, but which lingered into the first decade of the 20th century.

Brown, an historian, has produced a biography about a writer who, since his death in 1940, has occasioned multiple biographies and thousands of critical works which make much use of biographical information. And that list does not include the crowded terrain of works on Fitzgerald’s wife, Zelda, nor on their set, their era and the world of ex-pat artists in Paris in which the Fitzgeralds usually figure prominently.

Paradise Lost places considerable importance on Fitzgerald’s mixed heritage. There is the Maryland landed gentry family that was his father’s (a photo shows the young Scott’s membership card in The Children of the American Revolution – as close as America gets to Debrett’s). His mother, Mollie McQuillan of Co Fermanagh stock, brought the hard-earned cash of a grocery fortune to the marriage, and a rather outré personality which embarrassed her pampered son throughout his life. Fitzgerald’s genealogy has echoes that will be familiar to Irish readers. He shared with Joyce a degraded paternal lineage resulting in the lost birthright of the author-sons with resultant chips on the shoulder and a tendency to dissolute living.

Fitzgerald was far more ambivalent about Catholicism than Joyce and Brown’s exploration of the phenomenon of American crossover Catholicism gives insight into his fiction. Fitzgerald’s parents chose a Catholic east coast prep school that specifically avoided grooming boys for elite Catholic universities like Boston College and Georgetown in favour of local Ivy League colleges like Penn and Princeton, the latter being Scott’s eventual choice.

Brown has a tendency to repeat his underpinning theses – such as Fitzgerald’s identification with the old Confederacy, his insecurity about his size and lack of physical prowess and his propensity for hero-worship well into adulthood. The author also manages his own narrative awkwardly at times, having to double-back to identify people or events on a second appearance within his pages. There are also strange omissions. There is no reference to Margaret Mitchell’s enviable Pulitzer success with her novel Gone with the Wind, although Fitzgerald was one of many script doctors on David O Selznick’s Academy Award winning film that followed. In Mitchell’s brave and gentlemanly Ashley Wilkes, Fitzgerald would likely have seen near-perfect male attributes. Brown is also given to constructing neologisms such as “civilizational” and “mixed mindedness”.

Paradise Lost accomplishes much in its aim to contextualise Fitzgerald within both American historical and literary historical parameters. This new biography manages to get past the trappings of Fitzgerald’s boozy flapper-era persona and to credit his talent for taking the pulse of the America in which he lived.

In one of Fitzgerald’s finest stories, The Rich Boy, a wealthy ageing bachelor wanders Manhattan’s deserted summer streets recalling past social seasons and venues, including the luxury hotel, The Breakers:

“Palm Beach sprawled plump and opulent between the sparkling sapphire of Lake Worth, flawed here and there by house-boats at anchor, and the great turquoise bar of the Atlantic Ocean . . . Upon the trellised veranda of The Breakers two hundred women stepped right, stepped left, wheeled, and slid . . . in half-time to the music . . .”

The Breakers is still there. It is a 10-minute drive from Mar-a-Lago, one of Donald Trump’s opulent home bases, and connects us again to Fitzgerald’s era. It is apt that Brown’s biography and the stories in I’d Die for You should appear in the same year, because these 18 fugitive, unpublished or uncollected stories also provide insight into a different Fitzgerald. Because his dark novel The Beautiful and Damned, considered to be among his best work, was poorly received, some of these more somber stories were withheld from publication to protect “the brand”, as it would be termed today. The collection also harkens back to Fitzgerald’s best early stories, like the cautionary and allegorical The Diamond as Big as the Ritz, with its sinister character Braddock Washington whose Trumpian domain is where American rule of law ends.

The IOU, from 1920, is a satire on commercial publishing just as relevant in its cynicism today as it would have been nearly a century ago, and all the more noteworthy as it is a trenchant example of a writer wilfully biting that hand that was feeding him. Written more than a decade later, Nightmare (Fantasy in Black), set in a mental hospital (of which by then the Fitzgeralds had had much first-hand experience) was withheld from publication in part because editors of various magazines believed the world in 1932 was bleak enough. Travel Together, from 1935, highlights several images and recurrent thematic preoccupations familiar to Fitzgerald readers – beckoning green lights indicative of hope, multiple watchful eyes and a fascination with modes of transport. A tale that holds together well, it too was never printed because the author wanted to polish it more before letting it go. The title story of the volume dates from much the same period. It is a suicide story, and is set in the resort town of Asheville, North Carolina, where Fitzgerald had been sent for a rest cure, and where he had tried to take his own life. The story is populated by Hollywood types he would have known well by then, although the language is often of redolent of The Great Gatsby and its world.

Each of these short works is prefaced by a detailed headnote, placing it within the context of Fitzgerald’s life and career. Not all the selections included are fully realised stories – there are a couple of important fragments and three are film script scenarios. Reproductions of typescript pages show the author’s handwritten marginal notes. I’d Die for You is a specialists’ volume with a good deal of textual apparatus, but readers more generally interested in the process by which writers evolve will also pore over these pages. As for Fitzgerald fans, they will be glad there is something more for them to discover about a writer who may have died before he reached his full potential.
Christina Hunt Mahony is a research fellow at Trinity College Dublin who writes extensively on contemporary Irish literature