From Cold War to Hot Peace review: Obama and Putin behind the scenes 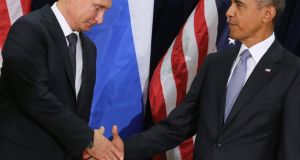 Book Title:
From Cold War to Hot Peace: The Inside Story of Russia and America

Michael McFaul is a hate figure among supporters of President Vladimir Putin. As US ambassador to Moscow in 2012-14, he was vilified by Russian media, harassed by militant nationalists and subjected to heavy-handed state surveillance. Privately, Putin grumbled to McFaul’s bosses that their ambassador’s meddling in his country’s internal affairs was poisoning American-Russian relations.

Preceding McFaul to Moscow was his reputation as an ardent promoter of democracy and a severe critic of Putin’s authoritarianism. In the 1990s McFaul had joined the legions of American advisers who descended on Moscow to teach the Russians how to do capitalism and democracy properly – a failed experiment in social engineering that instead impoverished the population, empowered corrupt politicians and created obscenely rich oligarchs through shady privatisation schemes. Although these postcommunist traumas were mostly home-grown, it became convenient to blame foreigners such as McFaul.

Not long after he was recalled from Moscow, McFaul was banned from re-entering Russia in retaliation for American sanctions against members of Putin’s inner circle following the eruption of the Ukrainian crisis in 2014. McFaul was the first American ambassador to be banned from Russia since George Kennan in 1952. The irony is that McFaul, like Kennan, loves Russia and has a genuine feel for its people, society and history.

A Russia expert and a speaker of the language, McFaul was an unconventional ambassador. He reached out to Russian society through every available means, including extensive use of social media: McFaul was a pioneer of Twitter-based public diplomacy. The problem was that his advocacy of democracy and human rights seemed implicitly threatening to Putin, who feared a reprise of the “colour revolutions” that had swept pro-western politicians to power in Georgia and Ukraine

McFaul’s explanation for his rough reception in Russia is that his arrival coincided with a dip in Putin’s popularity and the need to rebuild popular support at home by demonising the United States. Equally, McFaul accepts that Putin genuinely believes in an American plot to subvert his regime.

He attributes such anxieties to Putin’s history as a KGB officer but concedes “there are empirical data to support Putin’s hypothesis about American foreign policy. Over the last several decades . . . US presidents have deployed covert and overt power to overthrow regimes.” But McFaul’s mission in Moscow was to continue the so-called reset in American-Russian relations inaugurated by Barack Obama’s presidency. Indeed, as Obama’s adviser on Russian affairs, McFaul was a key architect of the “reset” and its themes of engagement, negotiation and co-operation with Russia.

Before entering government service, McFaul was a political-science professor at Stanford University, specialising in modelling the interconnections between prosperity, democracy and peace. According to McFaul’s theories, authoritarianism was inimical to both peace and economic growth. Hence his disappointment at the decline of pro-western Russian liberalism and the rise of Putin’s “managed democracy”.

During Obama’s first term, Dmitry Medvedev was Russia’s president while Putin served as prime minister. McFaul thought Medvedev more liberal than Putin and hoped this would translate into better relations with the United States. He argues convincingly that the reset was initially a considerable success. Russian-American co-operation resulted in a new treaty on nuclear arms reduction and the deal that ended Iran’s atomic bomb programme (since torn up by Trump). Medvedev embraced the reset with enthusiasm, reviving a long-standing proposal for a pan-European security system, including Russian membership of Nato.

McFaul is reluctant to allow Putin credit for anything, but he does admit the reset could not have happened without his consent and points to Putin’s own efforts to forge a Russian-American grand alliance after 9/11. Putin’s overtures were rebuffed by President Bush, and he was further disillusioned by American regime-change wars in Afghanistan and Iraq.

This was the background to what McFaul calls Putin’s “infamous” 2007 speech to the Munich Security Conference in which he attacked US unilateralism and the project of a unipolar international order dominated by American rules, values and preferences.

While Putin allowed the reset to run its course, he and Medvedev were outraged by what happened in 2011 in Col Gadafy’s Libya, where the unfolding Arab Spring led to civil war. Under cover of a UN resolution authorising military intervention to protect civilians, Britain, France and the United States engineered regime change, which resulted in the violence and chaos from which the country has yet to recover.

According to McFaul, Obama’s intervention in Libya was not intended as regime change but it augured western-supported democratic revolutions to topple authoritarian regimes across the Middle East, including that of President Assad, Putin’s Syrian ally.

Obama was as disappointed as Putin about Libya and felt constrained from direct intervention in Syria, a forbearance that provided an opening for Russia to intervene militarily to save the Assad regime from the insurgency of Islamic fundamentalists and other opponents. There was a similar pattern in Ukraine, when violent protests overthrew a pro-Russian government and plunged the country into civil war.

Some observers see Putin’s interventionism as reactive and defensive – a response to external threats, both real and perceived. For others, including McFaul, it is evidence of aggressive expansionism driven by Russia’s domestic politics.

McFaul now advocates containment rather than engagement with Russia. In his day, George Kennan was the architect of cold-war containment, a policy he later repudiated as too confrontational, and he was aghast when Nato expanded to Russia’s borders after the Soviet collapse. Nor did Kennan believe in the export of the American way, except as an exemplar for other nations.

A memoir-history written so close in time to the events described and with an eye on current controversies is bound to be partisan and contestable. But McFaul does a great job of telling the inside story of the Obama administration’s relations with Russia. He is particularly interesting on the compromises and adaptations of his personal transition from academic to policymaker. A colourful character himself, he brings to life the personalities and idiosyncrasies of the principals, even Putin, with whom he has little empathy.

McFaul believes in the power of individuals to shape events. His book is an account of choices made and opportunities missed. While he heaps most of the blame on to Putin, he doesn’t exempt himself or his own side from criticism.

The book concludes with an epilogue on Putin and Trump. McFaul is a true believer in Russiagate and argues that while Russian interference in the presidential election was marginal, the contest was indeed won on the margins. The domestic backlash against alleged Russian meddling in American politics means, as McFaul puts it, that “the hot peace, tragically but perhaps necessarily, seems here to stay”.