The English Patient review: Love and loss in the desert fires

From the archive: Eileen Battersby’s review of ‘The English Patient’ by Michael Ondaatje, originally published on September 12th, 1992 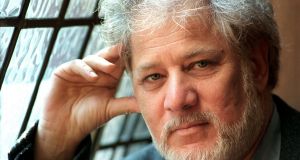 Four damaged people battle to make sense of the past and the present in Michael Ondaatje’s magnificent mystery romance The English Patient.

Set in northern Italy at the end of the second World War, this powerful, lyric narrative tells the story of Hana, a young nurse who tends the blackened body of the English patient. They are living in a deserted villa, itself a victim of the war, and though the Englishman is incapable of movement and has clearly joined the living dead, his intelligence controls the girl who sees her salvation in nursing him: “he is her despairing saint.”

Hana’s own mind is packed with death and loss. She moves around the empty house in a trance-like state and the most practical chores assume a ritual quality. Two other players enter this strange haven of space and light; a former Allied agent who travels to the villa on hearing that Hana is there, and a young Sikh, a sapper nicknamed Kip, who will clear the area of enemy mines.

Ondaatje is a poet with a mythic imagination and this novel unfolds in prose of such breathtaking lyric and muscular beauty that the reading of it becomes almost a physical experience.

Hana spends hours reading aloud to the patient whose “dark lean face with its angular nose has the appearance of a still hawk swaddled in sheets”.

Caravaggio, the agent whose previous occupation was breaking into houses back home in Toronto, likens the sheet-draped bed of the English patient, to “the coffin of a hawk”.

These four lost souls co-exist in a ghost house and, with the exception of the English patient himself, become preoccupied with “shedding skins. They could imitate nothing but what they were. There was no defence but to look for the truth in others”.

Ironically, it is Caravaggio the thief who gradually assembles the history which brought the English patient to his death-in-life situation in which his mind is caught in “that well of memory he kept plunging into during those months before he died”.

He fell from the sky in a burning plane. And these are the images which Ondaatje conjure up: sky, sun, light, the desert. Although the characters appear to be floating on their respective clouds of grief and confusion, it is a highly physical novel full of long descriptive passages of the landscape, especially of the desert.

As with In the Skin of a Lion (1987), Ondaatje, who was born in Sri Lanka but now lives in Canada, introduces the theme of bombs and explosives. In the earlier novel, the explosives were deliberately staged by workers building the bridges across Canada. This time, the explosives are the bombs and land mines.

Kip, who was trained in England by an eccentric English lord, knows everything about bombs, especially how to render them harmless.

Ondaatje’s narrative technique echoes that of John Dos Passos in combining historical documentary with episodic fictional sequences. There is a cinematic quality to his writing; this novel unfolds through carefully crafted set pieces of extraordinary visual power.

The evocation of heat and desert sands; spying and deception; of sanctuary and imprisonment; of characters bemused by memory and inertia and trapped by their past – all remind the reader of Lawrence Durrell’s classic The Alexandria Quartet. Yet Ondaatje is wholly original; there is nothing laboured or contrived. Even the obvious narrative continuity established between In the Skin of the Lion, and this magical new work is created through subtle touches.

The curiously disembodied romance of Hana and Kip appears to be going on independently of themselves, and this is contrasted with the brutal passion conducted between the English patient in his former self as Almasy the spy and Katharine, the wilful wife of Clifton, a young English idealist. As the English patient’s thoughts begin to move away from the memory of his Bedouin rescuers pouring oils on his charred body, he relates the story of his tortured love with analytical detachment; the lover becomes historian.

War and pain; public and private histories are interlocked in a narrative in which the multiple themes, complexities and horrors are starkly and beautifully developed in exact, mesmeric prose of hypnotic grace.

Declaring that The English Patient should emerge as the winner of this year’s Booker Prize, which is announced on October 13th, merely honours the Booker itself. Michael Ondaatje has created one the of the few truly great postwar novels.