Testament review: a sad and beautiful novel about Holocaust 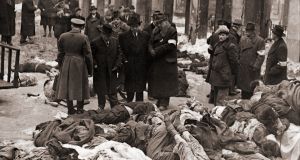 Jewish victims of SS in Budapest are viewed by officials: Kim Sherwood pulls the threads of her narrative together with great skill.

Joseph Silk is a famous English painter, his granddaughter Eva a fledgling filmmaker. When Silk dies, it falls to Eva to clear out his house in London, the centrepiece of which is the famous Blue Room, where he assembled an archive of his signature colour, from Milk of Magnesia bottles to peacock feathers and Fortnum and Mason tea tins. But the house Eva has been left by her grandfather is also filled with his silence, because Joseph Silk was not just an English painter. As a young man he was József Zyyad, a Hungarian Jew who survived the Holocaust along with his brother László. Where László chose to engage with their experience, Joseph was determined to move beyond it. “Of the boy I was, there is no trace,” he told Eva. “It comes down to memory. And I remember nothing.” “What’s a man without memory?” László asks him. “Happier,” says Silk.

The testament of the title is a document detailing the young József’s experiences during the war. As a plot device it’s a bit contrived, but no matter. It brings Eva to Berlin, and then to Budapest, where she is torn between her grandfather’s stipulation that the testament be destroyed, and the desire of historians to preserve it. Much is made of the lies Silk has told, perhaps as a hook to pull the reader along, but the hook is unnecessary. The question at the centre of the novel is compelling enough in itself. As a Jew, as an artist, as a human being, do you have the right to forget? “I think you’re drastically overestimating the importance of an English painter in the 21st century,” Eva tells the curator of the Jewish museum in Budapest. “I think you’re drastically underestimating the importance of a Hungarian Jewish survivor with a voice in the 21st century,” says the curator.

The horrors of the Holocaust are familiar to us but none the less shocking. These stories, in all their painful detail, can never not be shocking. “It was true, these essential facts: what people could do to each other, what people had done, what people do.” Sherwood employs a split narrative to follow the young Silk and his brother on their separate journeys of survival across Europe, while alternately following Eva’s travels back to the places of the past. It’s a device that pays off as the novel progresses and the two strands of the story begin to converge. The past is told in the present tense, the present in the past. Towards the end of the book, we learn this is no accident. “History doesn’t happen in the past tense.”

Raised to ignore her history, Eva is shocked to be identified as a Jew on the streets of Berlin. The art expert she has travelled there to meet is, by contrast, reconciled to the complexity of his legacy as a young German, something he describes as his “opposable thumb”. Eva subsequently subscribes to the Twitter feed of the Holocaust Memorial Centre in Jerusalem, receiving daily reminders of the atrocities of the past, while at the same time witnessing the present-day surge of the far-right in European elections. Later in the novel, Silk’s grave is defaced, a swastika painted on his headstone. There can no longer be any doubt that history matters, and while Silk’s refusal to be a prisoner of it is understandable – admirable even – by the end the novel Eva understands the need to bear witness.

This is a poetic novel, but there are times when the poetry of it is frustratingly opaque. At other times Sherwood pares her narrative back to nothing but dialogue, and it becomes as lifeless as a film script. But these lapses are shortlived; at its best her writing is elegant and highly effective, like the silence in a car that “poured over us and set with cracks only enough to breathe”. The pages of a book are soft, “like furred cotton”. There are “black hills and sugared stars” outside the balcony of Eva’s hotel. A brother’s voice is “a radio in a storm”.

This novel explores big ideas – some of the biggest ideas there are – but its power as a work of fiction lies in the personal. The story of Joseph Silk’s decision to leave his terrible history behind him, and the consequences of that decision for his own and subsequent generations, is ultimately a tragic one. Sherwood pulls the threads of her narrative together with great skill to deliver a sad and beautiful book.