Eurotragedy review: What Europe got wrong in the euro crisis, by a troika insider 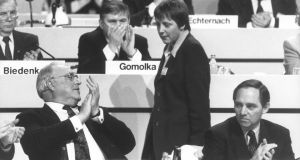 The many errors in official Europe’s attempts to deal with the euro-area crisis are richly documented in Ashoka Mody’s new book, Eurotragedy. His thoroughly researched story is lively and full of detail, especially highlighting unwise and incoherent policy statements made by politicians and others in countries on both sides of the great euro-area divide between creditor and debtor. There is indeed much to criticise, and the economist has skilfully woven together many of the diverse strands of the euro-area crisis, as well as the fateful decisions taken during the years of its planning and construction.

It is as well to be reminded of some of the undoubted errors that go back to the start of the century or even before. For example, Mody is surely right to say that all concerned should have realised in 2000 that Greece was neither ready nor qualified to be admitted to the euro. The excessive conservatism of the European Central Bank in the growth slowdown of 2001-2 is also well documented here. And the Orwellian title “Stability and Growth Pact” given, in 1997, to a poorly thought out and overly mechanical set of fiscal rules – just as likely to destabilise economies and slow growth – is rightly called out.

The pen pictures of incompetent or ill-informed technocrats and self-serving political blowhards create a darkly entertaining though discouraging scenario. Without elaborate theorising, Mody allows the narrative to convey his main message, which goes well beyond the familiar complaint that there were gaps in the design of the euro and in the conduct of policy once it had been introduced. He asserts that the whole concept of a single currency was a mistaken one that has poisoned Europe in a way foreseen almost half a century ago by economists from both left (Nicholas Kaldor) and right (Alan Walters).

Mody certainly does not mince words in passing judgment. Few hostages are taken and few personages get the benefit of any doubt.

Among the book’s leading villains are two members of the German CDU party. One is the former chancellor Helmut Kohl, not just for pushing forward the single-currency project but also for the decision at the time of German reunification to convert East German pay scales into West German marks at the unrealistic exchange rate of one to one, at a stroke dooming the newly welcomed region to decades of high unemployment and economic stagnation.

The other German most demonised by Mody is Wolfgang Schäuble, easily the most influential member of the eurogroup of finance ministers between 2009 and 2017. He is criticised for many errors, though none larger than his insistence, in early 2010, that Greece repay its unaffordable indebtedness to private investors with unaffordable loans from European governments and the IMF.

These two are far from the only subjects of criticism in this book. Indeed, most of the policymakers deemed praiseworthy for some judgment or achievement seem to have also blotted their copybook in some way that must not be overlooked.

But, as the story progresses, one begins to sense that Mody may have overdone things. He leaves little room for qualifications, and there is a tendency to overstate weaknesses. For example, I am sure that he is wrong in thinking that Mario Draghi’s Outright Monetary Transactions (or “whatever it takes”) policy lacks the capacity to deliver if it were to be called upon.

Ireland’s crisis receives less attention than one would have anticipated given Mody’s central role as the International Monetary Fund’s mission chief for Ireland at the start of the European Union-IMF programme. The treatment here is well informed, although it gets sidetracked on issues of peripheral importance to Ireland, such as the belief by some Irish politicians that the famous Merkel-Sarkozy agreement at Deauville (on bailing in holders of distressed government debt) caused the Irish bailout, whereas it just brought it forward by a few weeks. Here, though, is an example of Mody’s tendency to overstate his case: in order to persuade the reader that Deauville had no effect at all he provides a chart showing Irish interest rates over the following nine days; in fact two-year rate spreads began a sharp increase – 300 points in a fortnight – on the 10th day, just after the agreement was endorsed by the European Council.

Ireland’s relatively quick macroeconomic recovery is portrayed as a migration of Ireland from southern to northern Europe, but he does not infer a rosy future. Specifically Mody rightly points to the vulnerability of Ireland’s low corporation-tax regime. Some companies’ manipulations of this regime to shelter egregious amounts of global profit from taxation should never been allowed by the Irish authorities.

In the end, despite all the angst, the recommended policy package from Mody is surprisingly conventional. He argues that the Greek debt to official Europe should be cut by two-thirds, that new government debt to private creditors should be subject to restructuring if it proves unsustainable and that the fiscal-stability rules of the euro area should be dismantled. Other possibilities, such as the withdrawal of Germany from the euro area, are presented as part of an undesirable but possible alternative.

Oh yes. He does also say that there should be a vigorous effort to improve the universal provision of education with a view to creating a European republic of letters. But this would not be a common project. Instead all European nations would “make their own commitments so that [they] can join in competition and spur one another to greater effort”. At the end of the day, then, it seems that Mody’s scepticism is not just about the euro but about the European Union project as a whole, seen as the source of political and economic malaise.

But is that really it? Does the rise of populism in countries as far apart as the United States, United Kingdom, Russia and Hungary, none of them in the euro area, and some not in the EU, not point to a wider and deeper source of current political economy failures?