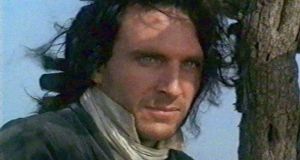 Stormy: Ralph Fiennes as Heathcliff in 1992 version of Wuthering Heights. ‘There is real evil in this book; the word ‘brutal’ comes repeatedly to mind.’

I wonder does anyone need to be told to read Wuthering Heights? I certainly hope not, but then, there was that recent, wildly depressing sales statistic; it seems that Wuthering Heights, unquestionably one of the greatest novels ever written (as well as one of the most written-about novels ever analysed and re-analysed, by generations of critics, representing almost every school of thought), sold nearly twice as many copies when reissued in the style of Stephanie Meyers’s Twilight series, as it did in the Penguin Classics edition. Meyers claimed it as her characters’, Bella and Edward’s, favourite book, and even had Bella quote Cathy, to express her similar, obsessive love. Shudder.

I first read Wuthering Heights when I was 12, and have re-read it every two to three years since. It’s a book that seems to morph between readings. Each time there is another layer of meaning, a tone or stunning description I had missed. The characters are at once cruel, selfish and primal, kind, loving and refined. They are, in this, some of the most real characters ever to grace a page. By “real”, I don’t mean they are realist; Heathcliff, Cathy, Hindley Earnshaw, Edgar Linton, these are people at once inextricably written into the harsh realities of the world, and into a fairytale. They are both dead and alive, existing in their houses on the moors as characters exist on the stage in a Beckett play, or within a Greek tragedy.