George Fitzgerald, whose latest book is The Promise Maker, looks back on a career in the ring and on stage 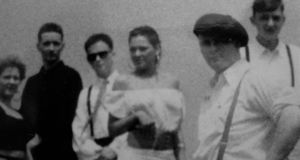 In 1992 the Los Angeles Times reported that the 1990s hit band, The D11 Runners, got its name from a Dublinpostcode. The article covered Alan Parker’s choice of actors for his blockbuster film, The Commitments. D11 band member Ken McCluskey had been chosen to play Derek Scully.

The band was one of the most important and influential on the Irish circuit in the early 1990s. The founding members of the Finglas outfit were the Fitzgerald twins, myself and Joseph.

We started life in the flats of Ballymun. A report in the Irish Catholic in 2005 stated: “George Fitzgerald was brought up in one of those Ballymun Towers which by the turn of time and government policies, are now being torn down”.

In 1973, our mother had had a chance meeting with Charlie Haughey and asked him if he could house us. A week later we got a letter and our young family moved to the sprawling housing estate of Finglas South.

At the age of 10 we joined a boxing club, like a lot of our friends. Boxing became the alternative to crime, keeping young boys from the street while instilling discipline. We spent most nights honing our new skills in the ring. Our performances attracted the interest of sportswriters, and our names began appearing in the national papers, from a very young age. One headline said: “Brothers meet in the finals”. The story stated how we were pitched against each other in the boxing finals in the National Stadium.

The boxing club was the school of hard knocks. It kept us on the straight and narrow so we avoided a lot of the pitfalls other boys fell into.

In the early eighties, Joseph and I, along with younger brother Pat and my future wife Sandra McGowan, started a band called The D11 Runners. The eight-piece consisted of neighbourhood friends. Initially rooted in reggae, we evolved into a soul-dance outfit. We took the band from a school in Finglas and started playing in rundown venues across Dublin. It was while playing at an outdoor gig with Something Happens that we were spotted by Peter Farell, who would become our manager. A close friend of Louis Walsh, he brought his band to Louis’ attention and he became our agent.

In 1990 we released our first single, I Surrender, and appeared on a TV show hosted by Dave Fanning. The single reached the top 20, which led to national coverage and gigs with another Finglas outfit, Aslan. Christy Dignam and drummer Alan Downey were boyhood friends. I sat in school with Alan, we knew Christy and Joe Jewell didn’t live too far from us.

Our second single, Yeah, Yeah, almost made the top 10 and led to more TV appearances, radio interviews and frequent visits to RTÉ’s The Den hosted by Ray Darcy and Zig and Zag. We went on tour with Technotronics who had a hit with Pump Up the Jam, played with The Cranberries and Brain Kenndy, later filling the National Concert hall and bigger venus.

With the release of The Commitments, it became widespread news that Roddy Doyle’s 1987 book was based on The D11 Runners. Joe Duffy got us a spot on the Late Late Show. At largest Lark in the the Phoenix Park, we played in front of 70.000 people.

Our third single, People Lets Dance, made it into the top 10. Then, like our fictional counterparts in the film, we broke up. Sadly, Joseph, our lead singer, died  away in 2012.

I went to work for Bono in the Clarence Hotel and wrote my first book, Somebody Up There Likes Me Too, in 2005. Other books followed, including The Secret Life of Ashley Brown and now its sequel, The Promise Maker.

It is the tale of New York-born Frankie and his move as a child to tenement Dublin in the early 1930s. The book is filled with colourful characters most of whom are villains, Slasher, Harry-Boy, Buster and Paddy. Daisy-May and Codswallop.