Lost in transition: the fiction of Jennifer Johnston

Her writing dwells on inter-relationships, ‘mixed’ marriages between Catholics and Protestants, links between Irish and British, ‘indigenous’ Irish and Anglo-Irish 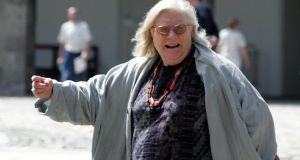 Jennifer Johnston, daughter of a playwright and an actor, writes quietly dramatic novels, reminiscent of the works of Chekhov and Ibsen. Often, her theatrical heritage appears in the structure of the writing, with character drawn through dialogue.

Johnston constructs conversations as characters in a play might speak them: interrupting or echoing one another, some interlocutors finishing others’ sentences. A good example is the interaction between Laura, Dominic and Maurice in The Invisible Worm. Dominic, it is clear from their first meeting, is on the same wavelength as Laura, unlike her boorish husband, who cracks inane schoolboy jokes while the other two exchange quips on Aeschylus.

In several novels, characters (such as Laura in The Invisible Worm) choose living in a “mad museum” of memory, finding that preferable to fully engaging with the live present

Johnston’s novels could be seen as a kind of fictional representation of Irish society’s dialogue with itself: her characters weave their own stories together into one yarn, with some threads integrating more harmoniously than others.

Her fiction demonstrates a keen awareness of the dual tradition she inherits, showing both clash and confluence of cultures. She returns again and again in her writing to inter-relationships, “mixed” marriages between Catholics and Protestants, relationships, alliances and friendships between Irish and British, “indigenous” Irish and Anglo-Irish.

Some instances of these complex relationships are: in The Old Jest, Nancy, a young Anglo-Irish woman, helps a Republican fugitive, Major Barry; in The Captains and the Kings, the elderly Anglo-Irish Charlie Prendergast befriends a Catholic boy, Diarmid Toorish; in Fool’s Sanctuary, Anglo-Irish Miranda, whose brother is in the British Army, falls in love with Republican activist Cathal Dillon; in How Many Miles to Babylon, Anglo-Irish Alexander’s best friend is Jerry, a local Catholic.

Friendships challenge boundaries, and loyalties are intersectional. However, it is noticeable in Johnston’s novels that, although she deals sympathetically with characters from both Anglo and Gaelic traditions in Ireland, the narrative viewpoint is predominantly Anglo-Irish.

Although she resists the description of herself as a Big House writer, Johnston acknowledges her familiarity with that milieu, and many of her novels show a fascination with the liminal group of Anglo-Irish people who inherited such places, and focus on their interaction with the “native” Irish. Much of her work adds to the tradition established by Anglo-Irish women of documenting their way of life, a tradition encompassing such fine social commentators as Maria Edgeworth, Somerville and Ross, Molly Keane and Elizabeth Bowen. Johnston shares another remarkable tendency with them: a dry understated wit. Many of her novels contain subtle ironies which have a slow-release quality, not always apparent on first reading.

Johnston characteristically downplays the importance of the term Big House, describing the dwellings she knew as “just rather crumbly country houses that one’s friends lived in”

Johnston characteristically downplays the importance of the term Big House, describing the dwellings she knew as “just rather crumbly country houses that one’s friends lived in”. The adjective “crumbly” could well be applied to the psychological and social themes of much of her work. Johnston is adept at chronicling the solitary life, and at representing how people behave when the cracks begin to show in the walls they have carefully constructed around themselves. If her work has one over-arching theme, it could be identified as that of transition – how people cope with change, especially if imposed by external forces upon characters who would prefer to inhabit their own internal worlds, peopled by phantoms of the past. In several novels, characters (such as Laura in The Invisible Worm) choose living in a “mad museum” of memory, finding that preferable to fully engaging with the live present.

In novels such as The Old Jest and Fool’s Sanctuary Johnston addresses the transitional period of the Irish War of Independence. Both of those novels deal with young women who are also in a transitional period of their own lives, late teens, just on the edge of adulthood. Their position is analogous to what could be termed the debut of the new Irish State, throwing off the “parental” guidance of Britain to set out on its own journey into developed nationhood.

Significantly, the teen years are also crucial in the development of the character of Laura in The Invisible Worm. Daughter of a “mixed marriage”, with a Catholic father who fought in the War of Independence and a Protestant Anglo-Irish mother, Laura could be seen as representing Ireland itself – a new kind of Kathleen Ni Houlihan, embodying two traditions yoked together in an uneasy relationship.

The Invisible Worm could be read on a metaphorical level, as a representation of a society divided against itself, torn apart by betrayal and counter-betrayal. It is a complex and dense text, economically written, but rich in symbol and meaning, and could be seen to represent as a psychic split in Irish society. It seems to suggest that entrenched Hiberno-Irish and Anglo-Irish beliefs in alternate, mythologised, versions of the past are irreconcilable, leading to madness and sterility.

As in many of Johnston’s other novels, The Invisible Worm conveys a sense that political loyalties in Ireland, whatever their motivation or source, can be dangerous to the individual. There is a pointedness to Laura’s declaration: “Causes frighten me”. Shadows on our Skin similarly shows a young woman whose body bears the physical brunt of violence. The significantly-named Kathleen is beaten up and has her hair shorn, the punishment for women who consort with British soldiers. As in many of Johnston’s novels, loyalty is shown to be a troublesome and far-from-simple concept.

Memory is important in Johnston’s work, and, like Proust, she depicts how we can be suddenly transported to another time and place by scent or sound

Her characters often live quietly unobtrusive lives, albeit haunted by the past, and beset by old ghosts, as does Helen in The Railway Station Man, before events intervene to bring matters to a crisis. In Two Moons, the supernatural presence is an angel, but much of Johnston’s work has an otherworldly feel. Boundaries of various kinds are breached, and Laura in The Invisible Worm is typical in admitting: “I am not sure in which tense I live, the present or the past.” Memory is important in Johnston’s work, and, like Proust, she depicts how we can be suddenly transported to another time and place by scent or sound. Laura might be describing a significant feature of her creator’s works when she says “memory is like a kaleidoscope, repatterning, retricking the past in your head”.
Dr Deirdre O’Byrne is a lecturer in English at Loughborough University. Jennifer Johnston is the Irish Times Book Club author for June 2017. The series culminates with a podcast on June 30th of an interview with the author by Eileen Battersby, which will be recorded at the Irish Writers Centre in Dublin’s Parnell Square on Thursday, June 22nd, at 7.30pm. Admission is free and all are welcome to attend and meet the author.