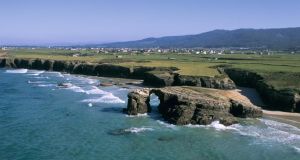 Galicia from the air, on the Cantabrian coast. Photograph: Xurxo Lobato/Cover/Getty Images

There’s a smattering of Iberia in the west-Kerry gaeltacht and some say it wouldn’t take too much digging to find traces of a few fired clay castanets. Dingle merchants were said to be so familiar with Spanish kingdoms in the Middle Ages that some of them built houses in similar architectural style.

Distressing television images of migrants on the Mediterranean trying to reach a “fortress” Europe contrast harshly with the relative freedom – pirates notwithstanding – that seaways once offered to great movements of peoples. Milesians, Phoenicians, Vikings, Moorish sailors made great discoveries and shaped our identity and our DNA. And when a group of Kerry adventurers completed a three-summer sea journey from Ireland to northern Spain in a naomhóg last year , they were once again challenging the myth of the “pure Celt”.

The Camino na Sáile or “camino by sea” voyage was led by west-Kerry sailor and poet Danny Sheehy, who sadly lost his life on June 9th during a continuation of the journey down to the Portuguese border. His crew’s adventure filmed by Dónal Ó Céilleachair for TG4 aroused much interest in a part of the European coastline that travel writer Michael Fewer has now focused his attention on in his latest guide.

Since he switched from architecture to travel writing almost two decades ago, Fewer has published some 22 titles, ranging from walk guides to architectural history. He and his wife, Teresa, chose Cape St Vincent on Portugal’s south-west extremity as starting point for this 2,500km journey north.

Coastlines eight degrees west of Greenwich were selected – including the western rims of Portugal and Spain, but excluding France. The home leg extends from Robert’s Cove on the Cork coast to Donegal’s Horn Head.

Dubliner Hugo Beatty is one of the first of many Irish connections identified en route. Beatty was a colonel in the Portuguese army who commanded the Lagos regiment during two wars with Spain in the mid 18th century, while the town was also wrecked by the great earthquake and tsunami of 1755. That sequence of devastating geological events was felt in Cork, and damaged part of Galway’s Spanish Arch.

The author blends history with contemporary events and observations – encountering farmers disillusioned with EU “diktats” on the size and shape of fruit, and inshore fishermen determined to overcome the market constraints of the EU common fisheries policy (CFP). He explores the Irish mercantile links in Lisbon, and records how the current O’Neill of Clanaboy, Dom Hugo Ricciardi, believes Ireland should dump British legislation and introduce a modern equivalent of the Brehon laws.

The author has an architect’s eye for the human impact on coastal landscape, while keen to pepper the text with background – most of it historical. Navigating the Galician rias or deep fjords, he tracks the fate of Armada ships, the development of pilgrim routes. He is struck by the apparent prosperity of coastal Galicia, but a reference to generous fish quotas in Irish waters benefiting the north-west Spanish economy could be useful here.

Moving onto the Irish Atlantic fringe, Fewer fills many gaps in Fáilte Ireland’s slightly sugary narrative for the Wild Atlantic Way. The couple avoid the obvious tourist traps along the route, but with some exceptions – after all, even Christopher Columbus couldn’t resist Galway, now the island’s most multicultural city for its size.

The author took some trouble to inform himself of the twists and turns of the Corrib gas dispute up in north Mayo. He visits Willie and Mary Corduff in Rossport village and – here a declaration of interest – mentions this journalist’s book on the controversy. The multimillion-euro project has left its scars on the community, he notes, and he is suitably impressed by the fact that local fishermen in the tiny exposed Erris harbours are not dependent on any multinational,and export their shellfish to markets in Beijing and Shanghai.

There are many more adventures in Sligo and Donegal, and a sense that the writer would have loved to linger a bit longer at certain points. How can one leave Dingle, for instance, without mentioning either Fungi the dolphin or former taoiseach, Charles J Haughey – once lord of a Blasket island and now remembered by a bronze bust in the harbour!

A couple of small irritations – did we need to know that two Portuguese women begging outside Sancta Maria in Lagos were “ancient” and with skin the “colour and texture of old leather” ? And Anglicised placenames do little justice to locations on this coastline. Gaoth Sáile, for instance, conveys far more about the landscape than the map reference to “Gweesalia”.

Illustrated with striking photographs, the paperback might be a little heavy for a latter-day pilgrim’s rucksack, but just right for a boat locker . . . and well worth consulting before setting out.