Michael Longley: ‘Being 77 and three-quarters is the best time of my life’ 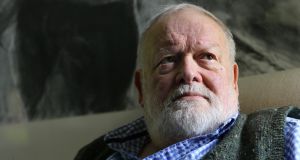 Michael Longley is stretched back in an armchair in his Belfast home, his clothing as colourful as the many bright paintings in the room by his artist daughter, Sarah. Blue gingham shirt. Green waistcoat. Green trousers. Tan slippers. And of course, the distinctive thicket of bogcotton-white beard, that arcs around his chin like an inverted pastoral halo.

Longley, as he reminds me several times during the interview, is “77 and three-quarters”. It’s usually small children who are so anxious to count up the advancing months to their next birthday, and there is something playful, even mischievous, about some of the things Longley says during the interview.

The non-sequiters, for instance. Out of nowhere, he announces: “Eavan Boland has become very queenly. I don’t see very much of her any more.”

“You know, like a queen,” is all he says by way of explanation, and then he’s done with the statement.

The egos of poets

Longley’s 11th collection of poems, Angel Hill, has just been published. Among the thoughtful, elegant poems that celebrate family life, grandchildren, and a long marriage (to his wife, the critic Edna Longley), are several poems celebrating the natural life of the Mayo townland of Carrigskeewaun, where he has visited over many decades. There are also poems that travel back in time to the Belfast he lived in as young poet.

In Bookshops, Longley writes about the first collections written by himself and his peers – Seamus Heaney, Derek Mahon, James Simmonds – vying for the readers’ attention in Belfast bookshops.

Our first pamphlets jostling for attention,

I’ll move mine to the front. Nobody’s looking.)

Are poet’s egos more fragile than those of other writers? I ask him. “Perhaps because the rewards are so slim, we are all squabbling over the same spoils,” he says. “I know that at 77 and three-quarters, praise still matters to me far too much. I gave my daughter Sarah the following advice, ‘When somebody praises your painting, pretend not to have heard, so that you get it repeated.’ I find myself doing that. Someone will say, ‘I really liked your last book,’ and I’ll say, ‘What was that?’”

Longley is laughing as he’s recounting this to me. He’s fully aware that it’s not the done thing to be seen to be so eager for praise. “But when you’ve survived to 77 and three-quarters, I don’t care so much any more. I don’t really give a f**k.

“But of course one is vulnerable. I feel vulnerable now with this book on the slipway, about to be launched into a sea of indifference.”

Seamus Heaney and ‘the N Thing’

We’ve moved from the sunny front room with its wall of poetry books by other poets – “I haven’t opened some of those for years” – to the cosy back kitchen for lunch. Lunch is sardine sandwiches, which come out of the fridge, already neatly cut in halves, and biscuits in a posh tin, “a gift from Edna’s publisher”. Over lunch, I ask Longley about being a contemporary of the late Seamus Heaney, to whom one of the poems in his new collection, Room to Rhyme, is dedicated.

“Seamus once thanked me for the way I dealt with what he called ‘the N Thing’,” Longley says, making tea.

“The N thing?” I ask, halfway through my sardine sandwich.

“The Nobel,” he says. “That I kept it in proportion – the way most of the world didn’t. But I have had to be very judicious answering questions about Seamus since he’s been turned into a kind of saint.”

“The Nobel prize used up all the oxygen in the room and it made Seamus a celebrity,” Longley says eventually. “In other words, it’s a bit like the Impressionists. One wouldn’t dream of saying the only Impressionist was Claude Monet. What about Degas and Cezanne and Manet and Van Gogh? In a way, Seamus’s huge reputation has been a distortion to poetry. I think he wrote great and immortal poems, but so did Derek Mahon. So did Paul Muldoon. But I have to be very careful about what I say.”

The thing about Aosdána, is that it saved some people’s lives

“Because people are always looking out for signs of jealousy and resentment.”

I point out that Heaney is dead, and thus long past anyone’s jealousy, whether real or perceived.

“I want to be accurate about it,” Longley says. “I myself wouldn’t want the amount of attention Seamus got when his life stopped being his own. Wherever he went, he was surrounded by a shoal of barracuda. People are very crude when they move into the world of celebrity.

“I remember the opening of Translations in Derry [this was in 1980] and the Guild Hall was packed. There was a huge crowd – I’ve told this story a few times – there was this young woman swimming towards me through the humanity. She came towards me and said, ‘Are you Michael Longley?’ and I said yes. I thought, I’ve got a fan! And she said, ‘I’ve always wanted to shake the hand of the man to whom Seamus Heaney dedicated Personal Helicon’.” He snorts. “That kind of nonsense has got nothing to do with poetry. But the important thing is his immortal poems, and you must write that down.”

We finish our sandwiches and go looking in the tin for chocolate biscuits. I’m asking Longley what fiction he likes to read. “I loved The Sea. John Banville is a wonderful writer. I remember Seamus saying when The Sea came out, he said to me, ‘Isn’t it wonderful to be part of a culture that produces prose as good as that?’ I told Banville what Heaney had said. Do you know what Banville said to me? ‘Did he really say that? Did he?!’” He munches on a biscuit, and reflects. “We’re all like schoolboys, really.”

Longley is a member of Aosdána, and I ask him about his views on the recent controversy about the expectation of artists to be consistently seen to be “productive” in order to retain their monetary cnuas.

“The treatment of Patrick Pye seems to me crass, unforgivably crass,” he says. “This is what happens when you have bureaucrats running things that have never tried to produce anything. I don’t understand the language these people use; their bureaucratic shit.

That concentration is like a drug ... I love that. I love the intensity of that. It’s such excitement.

“I don’t take the cnuas and I don’t get involved in the politics. But I think the thing about Aosdána, is that it saved some people’s lives.” He says he would never consider resigning his place in Aosdána so that it could possibly open up to an artist who would take the cnuas. “I wouldn’t resign my right to claiming the cnuas just in case in the future I fall on very harsh times,” he says. “It’s a kind of invisible safety net.”

“In some ways, being 77 and three-quarters is the best time of my life,” Longley declares. “The books are behind me. I have written my new book, which is my 11th collection, and ‘they can’t take that away from me’. Do you know that song?”

“The bastards,” Longley says firmly. “One’s foes. You can’t be an arts administrator in Northern Ireland without having made some foes.” (Longley worked in the Arts Council of Northern Ireland for many years.) “No; ‘they can’t take that away from me’.”

Before I leave, Longley signs a copy of Angel Hill for me and tucks a new poem, Matisse, written since the book was published, into the endpapers as an extra gift. His Selected Prose will be published in the autumn, which will include book reviews he wrote for this newspaper, in addition to a piece of memoir, some writing on jazz, and the three lectures he delivered while Ireland professor of poetry.

But it’s poetry that he clearly finds most satisfying to write. He describes what writing a poem is like. “You’re concentrating, and all of you is gathered up, deeply attentive, and that concentration is like a drug, and you realise you’ve been at a sheet of paper for four hours. I love that. I love the intensity of that. It’s such excitement. I don’t know how people do without it, but most people do. The biggest thrill of all is the Rubik Cube moment when the poem goes clickety-clickety-click and you know you can’t f**k it up – I love that,” he says, his whole face alight, a small gorse fire.

Angel Hill, by Michael Longley, is published by Cape Poetry. On June 1st, it was announced that Michael Longley had been awarded the annual £1,000 PEN Pinter prize, established in memory of the late playwright, Harold Pinter