‘When shall I see my home again?’ The direct provision poets 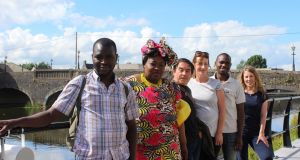 On June 20th a book will be launched that is unique in the history of this State. It’s an anthology of poetry, written by the writers’ group Crocosmia, which is comprised of people who have lived, or are living, as refugees or asylum seekers in Ireland. The book, The Plurality of Existence in the Infinite Expanse of Space and Time, is part of a project of the same name initiated by artist and lecturer Clodagh Emoe. The aim is to make it available in public libraries across the country.

As you would expect, it’s a rich and varied collection, with writers from Cameroon, Croatia, Pakistan, Rwanda, Tanzania and Uganda.

Like many artists, Emoe is interested in exploring human existence and her method is almost always a collaborative one and is often event-based.

“I approach art as a form of enquiry and a way of thinking, and I’m interested in extending that to others too. People are very important to my practice!” she says.

She is interested, too, in what she calls liminal or “in between” spaces. For a previous project, Metaphysical Longings, she guided people into a trance-like state, using a yoga technique called Yoga Nidra, and then asked them to draw something.

“In a way, people living in direct provision, are also in a kind of in-between state, constantly,” she says. “And I wanted to learn about what that’s like as a human experience.”

“I also wanted to draw attention to direct provision, in an implicit way. That’s one of the things I like about art – it’s not obvious or didactic, but often people engage with the work and then want to find out more.”

Emoe initiated the project in the garden of the Spirasi Centre, in Dublin. Spirasi is a non-governmental organisation that works with asylum seekers, refugees and other disadvantaged migrant groups. Gardening was a way for her to get to know people there and it allowed the group to work together as equals.

“I think it’s important, in any collaboration, that you don’t just parachute yourself in and say ‘right, now we’re going to do an art project’,” Emoe says.

Together the group weeded, set beds, planted spring bulbs and transformed the entrance to the centre with fragrant jasmine, lavender and herbs. They planted apple trees in the front garden and raspberry bushes, rhubarb, potatoes and onions at the back of the building.

The gardening project led on to the writing project. Inevitably, while digging and sowing and weeding, they told each other stories and shared their experiences. It also gave the members the idea for the name of their group. Crocosmia is the name of the root bulb of the Montbretia, the vivid orange wild flower commonly found in the hedgerows of Ireland. While gardening in Spirasi, the group found a crocosmia bulb and learned that the Montbretia is native to the grasslands of Southern and Eastern Africa. Impressed by the innate ability of this flower to adapt and flourish in Ireland, they decided to take it as a moniker.

The title of the project and the anthology, meanwhile, The Plurality of Existence in the Infinite Expanse of Space and Time, is a direct reference to French philosopher Jacques Rancière’s reflections on Louis Auguste Blanqui’s Eternity by the Stars, written in 1872, a Utopian text that embraces difference, proposing that the organisation of society be based according to the laws of the natural world as opposed to any sort of imposed political regime.

This method was also employed initially for The Plurality of Existence in the Infinite Expanse of Space and Time. It was a little later that one of the group, Jean Marie Rukundo Phillemon, from Rwanda, began developing his pieces into more formal poetic form, inspiring some of his fellow writers to do the same.

The “list” method gives the poems a directness and an immediacy that are compelling.

Saida Umar’s Bhalwal, Pakistan, for example, conjures up the colour and struggle and joy of life in that city:

Through an open door people see the potter in his courtyard working on his wheel
Massi, the woman tending the Tandoor oven in the street
Ching-chi rickshaws everywhere
Ice-cream sellers and fruit sellers on their bikes
Collecting sacks of old dry bread for money
Ducks in the canal
Azan, the call to prayer

And it also allows for deeper resonances to be conveyed, for example the last lines of Funeral Ceremony, Cameroon, by Marie Claire Mundi Njong, have a poignant ring:

Everybody is leaving
The women carrying empty baskets on their heads
The men carrying off their empty calabash singing native songs and English songs
“Home again, home again, when shall I see my home again...”

Only one poem, War Child, by Jean Marie Rukundo Phillemon, from Rwanda, deals directly with the experience of oppression and torture shared by many of those who are seeking asylum. And even it ends on a positive note:

He never wants to be listened to before listening to others,
for he holds a candle for others
For experience is the best teacher, no exams but he passed.

As well as our shared human experiences, the collection also, inevitably, reveals some of the cultural differences, particularly with regard to gender equality, such as Peter Rukundo’s To Cut Brooms, which deals with a “genital modification” initiation rite undergone by young girls between 10 and 13 in Rwanda.

Since they came together for the project, the members of the group’s circumstances have changed, Three – Annet Mphahlele, Saida Umar and Peter Rukundo – gained status, while Marie Claire Mundi Njong began a course in community and health services. Jean Marie is currently appealing his case. Although they no longer meet up on a weekly basis they come together for informal get-togethers and some of the members continue to write.

The Books Quiz: Who observed that ‘Hell is – other people!’