The Maid’s Room by Fiona Mitchell: past prejudice? 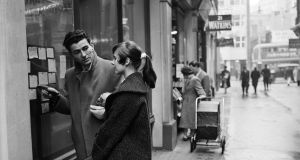 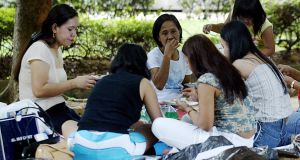 Domestic helpers enjoy a picnic in the shade at ‘Gulung-gulung’ park in Singapore, in 2003. Photograph: Roslan Rahman/AFP/Getty Images

My dad worked in an ice-cream factory in Greenford, London and one Summer I got a job in the office there, taking orders from local shopkeepers for their weekly supplies of Mivivis, King Cones and choc-ices. I got to eat as much ice cream as I liked.

The shop-floor workers were mostly men, and many came from the Caribbean, Pakistan, India, Poland, and Ireland like my dad. All the managers were white English men and one of them called each of the Irish men “Pat” including my dad, even though his name is Michael. That manager derided not just the “Pats”, but all the “foreigners”.

The office I worked in was populated only by white women, apart from another university student like me called Veena who was of Pakistani origin.

One day, a woman said something that I didn’t catch. In response, another woman replied: “Well, what do you expect, he’s Irish?” Several of the women exploded with laughter.

The women made casual racist comments as often as they talked about what they’d watched on television the night before. I kept quiet and got on with my work. This wasn’t my world after all; I was only here for six weeks unlike my dad who worked there for 34 years.

Once when I came home from that job, I sat at the bottom of the stairs feeling down about the women’s attitude, and my dad laid his enormous, gentle hand on top of my head. “Don’t let it get to you,” he said, ‘they’re just ignorant.’

But I did let it get to me. Those women hadn’t moved on from the 1960s when my dad, after arriving in the UK, found it difficult to find a place to live because so many of the cards he saw in shop windows advertising rooms bore the words, “No blacks, no dogs, no Irish.”

One day at the factory, a young woman from the office came back from the canteen and went on a tirade about how many black men were eating in there. She used the most disgusting insults to describe them, then peeled back the paper on her King Cone and sunk her tongue in.

I’d had enough. “We’re all human beings for God’s sake,” I said (or words to that effect), “so stop being so racist.”

My heart was hammering; I’m pretty sure my cheeks went pink.

Another young woman piped up, “Well said.” Others nodded their heads too.

I’ve never forgotten the way those racist comments made me feel, the way they must have made Veena feel too.

That outrage surfaced all over again when I moved to Singapore with my husband and three-year-old daughter in 2009.

Many Singaporeans and expats hire live-in domestic helpers from countries such as the Philippines and Indonesia. I watched these domestic helpers washing cars and cleaning steps on a Sunday because back then foreign domestic helpers had no legal right to a day off. I watched as the women stood apart from the families they worked for when they were out, all but ignored.

I lived in a condo – think modern apartment block replete with a gym and an outdoor swimming pool and you’ll get the picture. It was populated by local families and ex-pats, many of whom employed domestic helpers. Some of the employers told me how they locked their maids’ passports away, issued curfews, and quibbled over the amount of money they were going to pay the women, who didn’t earn all that much anyway.

The injustice of it boiled inside me, particularly as I began to talk to domestic helpers whenever and wherever I could.

The women shared their stories with me, telling me how some of their employers had given them so little food to eat during the day that they felt weak. One woman told me how her previous employer in Hong Kong had made her sleep under the dining room table; another woman relayed how her employer wouldn’t buy a fan for the tiny, windowless room that she slept in.

I poured these stories into my characters, Filipina maids Dolly and Tala, together with the warmth and humour of all the women I’d met.

Once I’d finished writing The Maid’s Room, it took me several years to find a publisher.

You don’t need to have suffered prejudice to know how wrong it is, but perhaps one of the reasons I never gave up on getting The Maid’s Room published was because of the way my dad and his colleagues were treated all those years ago.