Bully-Proof Kids review: how to empower children in peer networks 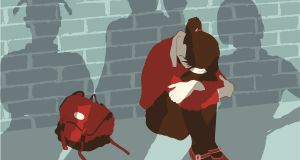 In any given group of children 10-15 per cent repeatedly bully others, while the same percentage is repeatedly targeted by bullies.

The mother posting at five in the morning on an Irish parenting online forum was sleepless with worry about her son being bullied in first year at secondary school.

Telling the school had only exacerbated the problem. Despite being suspended for a day, the offending boys had just increased their torment of the victim who they now see as a “rat”.

“He’s gone from being a happy confident kid to a miserable and extremely anxious one who is afraid to go outside the door,” wrote the despairing mother. “The worst thing is that these were his friends that he trusted and now he feels he has no one.”

Her anguished plea for advice was a stark reminder of the need for this book from psychotherapist Stella O’Malley. Working in private practice in the midlands, she says she was compelled to write it by the sheer number of people she has seen whose lives have been blighted by bullying.

It is estimated that in any given group of children 10-15 per cent repeatedly bully others, while the same percentage is repeatedly targeted by bullies.

The increased awareness of bullying in recent years and the requirement for all schools to have an anti-bullying policy are welcome developments but it remains a pernicious problem. The flipside of more talk about this behaviour, however, is that there’s a growing tendency for the word “bully” to be overused.

O’Malley defines it as “meanness from someone with more power than you, that is repeated over time”. Neither teasing nor taunting are bullying – unless the other two characteristics also apply.

Recognising it is a start; trying to understand the dynamics of the situation is the next step before deciding on the best course of action. This manual from O’Malley is a valuable aid.

Targeted at parents, O’Malley’s emphasis is on empowering children and teenagers to navigate the sometimes treacherous world of peer networks, both face-to-face and in cyberspace. Parents can’t fight all their children’s battles for them and, as this author has outlined in a previous book, Cotton Wool Kids, and reiterates here, trying to remove difficulties from their lives may do them no favours.

Friendships begin to get tricky from about the age of nine onwards because that’s when children start to discriminate between their peers, she explains. As tweens morph into teenagers desperate to establish their identity, social standing can become an obsession and result in what teachers describe as “emotional carnage” by second year at secondary school.

O’Malley’s use of case studies helps to illuminate her analysis, which is refreshingly-free of psycho jargon. There’s an abundance of practical tips for those grappling with the fallout of bullying, covering aspects ranging from approaching the school, to developing your child’s social intelligence to handling the bully’s parents.

Those looking for a quick fix might be frustrated at having to trawl through the different permutations of social torment and the variety of effective responses but, as in most close encounters with human nature, nothing is straight forward. There is also a degree of self-reflection and honesty about your child’s characteristics required that might make some parents uncomfortable.

Even if you have no worries about your child being a perpetrator or victim, the chances are your son or daughter – or even yourself – are among the bystanders who let bullying happen. In a chapter devoted to this category, she quotes research that estimates bystanders are present in 90 per cent of cases and could often stop the bullying within 10 seconds if they chose to intervene.

“Persuading bystanders to become ‘upstanders’ would change any bullying problem into a more manageable but difficult situation instead of the horrendous epidemic that it is today,” O’Malley writes.

Even if your children haven’t been afflicted by bullying, deeper parental understanding of the phenomenon gained through this book could help ward it off – or at least minimise the damage.