The Saturday Poem: The White Horse by Colette Bryce 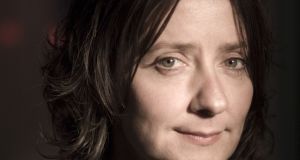 When the saint’s old bones wouldn’t journey
any further, he paused for a breather,
sat down by a verge
that was humming with the unfinished business of spring
and there, the old workhorse approached him.

The animal nuzzled its long white skull
to Columba’s chest
and wept, softly,
tears from its pale-fringed eye blotting
the shirt of its master, weary by the roadside.

Diarmait, embarrassed, tugged it by the rope
instructing the animal back to its duty,
but the saint shook his head
and mouthed ‘Let it be’
allowing the white horse to pour out its grief,

stroking the salt-soaked bristles of its muzzle,
the two of them kindred
in the knowledge of his death.
Blossom in the hawthorn, tiny lights;
a halo of flies around both of their heads.

Colette Bryce’s Selected Poems is a Poetry Book Society Special Commendation 2017. She has been shortlisted for the TS Eliot, Forward, Costa, and Roehampton prizes, and received the Cholmondeley Award as well as a special Ewart-Biggs Award in memory of Seamus Heaney. Today’s poem is from the Female Lines anthology published this week.