The Lost Words review: While this lovely book is aimed at children, adults will appreciate it too 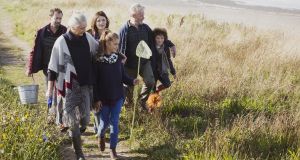 Studies show that children in the British Isles are more likely to know the names of Pokémon than of some major species of local wildlife.

The bestselling English author Robert Macfarlane is seeing a double encroachment upon nature’s wonders. One prong of this is recognisable: climate change, ever-present development over finite green space and the exhausting of finite natural resources.

The other is the proliferation of digital information, which is coming to occupy the space in young minds that was once occupied by a dawning perception of the natural world around them. As Macfarlane noted in a recent Guardian piece, studies have shown that even before the rise of the Pokémon Go app, children in the British Isles were more likely to know the names of Pokémon than of some major species of local wildlife.

His latest book, illustrated by Jackie Morris, is aimed at such children but also across age groups, and seeks to restore or foster a perceptiveness to the natural world in a digital age.

Subtitled “A Spell Book”, The Lost Words takes 20 plants and animals - the names of which have recently been removed from the Oxford Junior Dictionary (OJD) – and makes them the focus of acrostic mantras. In 2015, 28 leading writers, philosophers and arts practitioners published an open letter to the Oxford University Press reacting to the OJD’s omissions, which began in 2007, of words such as “dandelion”, “conker” and “otter” in favour of “blog,” “bullet-point” and “celebrity”. The letter noted a steep decline in children playing outdoors and in their physical fitness, and drew links “between natural play and wellbeing”.

For Macfarlane, not being able to articulate the natural world is halfway to losing one’s connection to it. Language use is reflecting, as well as a shift in childhood horizons, extinction itself. Some of the species omitted from the OJD and featured in this book, such as newts and starlings, are in decline – receding as a physical presence. And so these almost-poems, enwreathed by Morris’s illustrations, are to be said aloud in order to summon or bolster the power of the natural world in a child’s mind, and consolidate a capacity for wonder.

Though this lovely-looking book is aimed at children, it is not just for them. Macfarlane makes no concessions, for instance, to an imagined or artificial standard of young comprehension. There is no conscious writing down to the reader. From the very start, there is a discreet sophistication that will appeal to older readers. About the acorn: “As flake is to blizzard, as / Curve is to sphere…” “as/ Kindness is to good, so acorn is to wood.” Adders are “sine-wave swerves/ live-wire curves of force”. Shedding skin , it is an “Echo of snake, self-escape, a left-behind ghost”. (Note the sinuous hyphenations that thread through.)

Ruminations on kingfishers and wrens will no doubt bring to readerly adult minds associations of Gerard Manley Hopkins’s bird poems, from The Windhover to the eponymous image in As Kingfishers Catch Fire. Things like The Lost Words might well instill in young readers that which will become, in maturity, an appetite for the great poets of nature.

It is perhaps a shame that the book isn’t longer, conjuring every nature word that has disappeared from the OJD to date. Many that Macfarlane hasn’t chosen to reclaim are much closer to disappearing than ones he has. Though children of today may not know what a heron is, it’s unlikely that they won’t know a magpie or conker is. And what of “cowslip”, which many children won’t be able to identify, but which has found lovely expression in our Anglophone literature from Shakespeare to Joyce?

I was there for the first round of Pokémania, so it isn’t that long, relatively speaking, since I was a child myself. But I dread to think where my imagination would be now without my early fascination with the Collins GEM pocket encyclopedias on plants, reptiles, birds and lepidoptera that I collected.

Or the books my parents and their parents had, which I ended up with. Tracks & Signs of British Animals, by Alfred Leutscher; David Alderton’s A Step by Step Book about Stick Insects; Doreen King’s First Aid and Nursing for Wild Birds. And my favourite, Flowers by Claude Varieras. Ask any child from the last hundred years who has had lucky access to either books or green space and they will most likely tell you the same. It was the natural world that first captured them and gave them wonder. At a time in which children play outside less, and have less space in which to play, The Lost Words could well keep this wonder alive.