China: The millennial who should never have been born

Karoline Kan’s mother wanted a daughter, and defied China’s one-child policy to have one 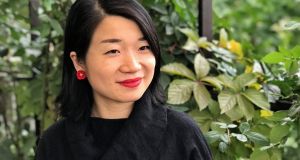 Karoline Kan has published a memoir examining the lives of three generations of Chinese women: her grandmother, her mother, and herself. Photograph: Kelly Dawson

Karoline Kan should never have been born. Her mother committed the rebellious act of having a second child in China in 1989. Under China’s one-child policy, which became a two-child policy in 2015, women were often forced to undergo sterilisation or abortions.

After giving birth to a boy her mother decided she wanted to have a girl, and managed to sidestep the sterilisation procedure the family planning officials usually insisted upon after women had one child. When pregnant, she would hide in fields when the officials came knocking on their routine hunt for any illicit foetuses.

After she gave birth she was hit with a fine that amounted to six times the family’s annual income. Kan’s grandfather, who had been resolutely opposed to the pregnancy, quietly handed over his life savings to help clear the debt.

Even then they couldn’t muster the money within the stipulated two-month window so they had to bribe an official with a freshly killed chicken, a packet of cigarettes and three bottles of pickled peaches to put a later date on her birth certificate to buy them a bit more time.

In her recently published memoir, Under Red Skies: Three Generations of Life, Loss, and Hope in China, Kan focuses on the lives of three generations of Chinese women: her grandmother, her mother, and herself.

It is a humane and poignant coming of age story by a so-called “millennial” that presents a vivid and accessible insight into the lives of ordinary people in contemporary China.

Kan’s parents always told her she was a strange child, because instead of playing with other children she liked to follow the adults around “like a little tail” and get lost in their enchanting story land.

Her dream from an early age was to write about the people she knew and tell their stories, as well as her own, “free from the government censorship and Communist Party narrative”. Aside from her debut book, this proclivity ultimately led Kan to a journalism career, working with the New York Times and later China Dialogue in Beijing.

Her objective with this book, Kan says, was to “show the humanity behind the cold economic figures and classifiers associated with China”. She points out that China is not only a global power but also a place where many still suffer from crippling poverty.

“Its technological advances make headlines daily, but its rural schools still lack qualified teachers,” she says, “and though we are pledged to the Communist Party, Chinese people live for the next Hollywood blockbuster, just like everybody else.”

She was born in a village on the outskirts of the city of Tianjin, where her family just about eked out a subsistence living. Her grandmother, Laolao, laboured long hours all her life, entered an arranged marriage, and spent her years quietly looking after the household.

Kan’s mother, though, managed to have a teaching career, set up her own kindergarten business, and wrestle free of the male-dominated, subservient existence most of her peers were leading.

Wanting more than a village life for her children, she uprooted the family and moved them to the nearest big town. This can be a treacherous journey for many Chinese villagers as the hukou, or residence permit, they hold from birth does not entitle them to many benefits urban residents receive, such as pensions and access to schools and healthcare.

There was one good school in town, and Kan’s mother was determined her offspring were going there – hukou or no hukou. Working around the clock and saving all they earned, her parents one day pulled together what they hoped would be a sufficiently large wedge of cash and a few giant trussed-up crabs, a seasonal delicacy, and put them on their bicycle seat and headed off to offer the “gifts” to the headmaster.

Eventually, the door to a decent education was clawed open for Kan and her brother.

In school, the books stressed the importance of loving the country and admiring the party, “in an almost brainwashing method, they made me believe if I was not a patriot and party lover, then I was committing the most serious crime”.

One day, when Kan was seven, the school administrator arrived in the classroom with three tall boys from the upper grades, carrying a television. The students all started cheering. A girl followed them in, carrying a picture of an old man that she hung on the blackboard, and they announced Deng Xiaoping, the paramount leader, had passed away. Kan and most of her classmates had barely any idea who Deng was.

“I know you are so sad, as am I,” the class leader said. “Thanks to our headmaster’s support, we can all watch the funeral and pay our respects to Grandpa Deng together. You can cry... I know you want to weep for our dearest grandpa Deng.”

They all stood up and feigned weeping, and Kan struggled to suppress a snort of laughter. A few of the better students managed to squeeze out a tear, but a couple of others burst out laughing and were immediately sent out of the room.

By the time she got to university she was keen to peer beyond the propaganda but the foreign news sites with information on events in China like the Tiananmen massacre on June 4th, 1989, were all blocked. A foreign teacher suggested she use a VPN – a virtual private network – to log on to blocked sites. Once on Google she did a search for “Tiananmen Square” and saw clips of tanks and bloodied people, and learned about those jailed, exiled and killed.

“I cried as I watched my country’s soldiers kill their own people, on the orders of our government,” she wrote. “I felt betrayed . . . China collapsed for me suddenly. I no longer understood what was in front of me. I had no faith in what I had been brought up to believe.”

When she left college she was one of 6.8 million graduates that year entering a brutally competitive job market. Kan wanted to find stimulating work, ideally in journalism, but her parents wanted her to go for a stable government job that offered the all-important Beijing hukou, and they felt she was selfish for not chasing this option.

Beyond the residence permit issue, officials still seemed intent on womb management. At one interview with a Chinese newspaper the man behind the desk told her she would have to sign a contract before she joined, promising not to have a baby within a certain number of years, as the company would not accept her working for a year and then taking time off to have a baby.

She did not want her biological clock to be mapped out for her, she said, so she bid him a polite farewell.

Feminist notions of empowerment and equality were entirely new to her, but confronted by such a dominant patriarchal society she began to embrace them, and she wasn’t alone – a movement was beginning to take hold across China.

Among the things she got involved in, she performed in a play called The Leftover Monologues inspired by Eve Ensler’s Vagina Monologues.

“Leftover women” is a term in China that refers to those who haven’t married by the time they reach 28. It is often discussed in the media and on online platforms, and thrown at women who may be approaching their “expiry date” by family and associates.

As she enters her 30s, she feels her life and her country are like a never-ending express train. “We work hard to keep up and never pause for rest, feeling that the moment we stop, we would lose sight of the unknown something in the future we are aiming to catch.”

She is certainly working hard, and she and many of her generation are quietly bringing about positive social change in China.

Karoline is the English name she adopted when she became a writer. When she was born her grandfather gave her the name Chaoqun, which means “to stand out from the crowd”.

He must be proud.