Kevin Barry: ‘The old weird Ireland is still out there’

The novelist on a changing country, scary characters, and throwing Madame Bovary at the wall 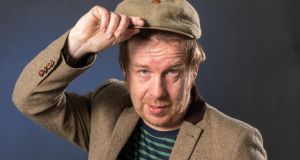 Kevin Barry on Night Boat to Tangier: ‘I wanted to get that thread of menace you often find in Harold Pinter’s writing.’ Photograph: Roberto Ricciuti/Getty

Kevin Barry was born in Limerick in 1969. His debut novel, City of Bohane, won the 2013 International Impac Dublin Literary Award and was shortlisted for the Costa First Novel Award.

His next novel, Beatlebone (2015), was the winner of the Goldsmiths Prize, which rewards British and Irish fiction that “breaks the mould or extends the possibilities of the novel form”. The book imagines John Lennon travelling to the west coast of Ireland in 1978 to try to reach the small island of Dorinish, which the musician had actually bought in 1967 for £1,550. Barry described his approach as “going as wild as I can within my stories”.

His new novel, Night Boat to Tangier, moves between the fictional town of Berehaven, in the west of Ireland, and the port of Algeciras, in Spain. It features two ageing Irish gangsters who reminisce about their wayward lives while waiting for the arrival of the boat from Tangier, across the Mediterranean in Morocco, and with it the possibility of finding a missing girl who binds them both.

I have a very strong feeling of time unfixed in certain landscapes in the west of Ireland. There are certain places where time as a chronological concept just does not apply

Night Boat to Tangier’s protagonists, Charlie and Morris, spend a lot of time waiting and talking. Is it possible for an Irish novelist to write about two characters waiting without Samuel Beckett hanging over proceedings?

[Laughs] The short answer is no. If there’s two fellas waiting in a story, Beckett is sitting right there on your shoulder. Interestingly, I saw a Druid theatre production of Waiting for Godot a while back, and it was good to be reminded that it’s a comedy. Basically, Charlie and Morris are big, yappy characters who have been hanging around in my head for a while. I tried to fit them into a play and a short story, but they ruined both, because they were just too big and belligerent.

There is a lot revealed in the way they converse, but also a lot held back or hinted at.

Yes, they’re combative characters, but almost in a coded way. There’s always these little secret tussles going on in their conversations. Norman Mailer said: “Whenever two men say hello to each other in the street, one of them loses.” That’s very Irish. There are certain conversations where it can take years to figure out what was actually meant.

The location, as ever in your writing, is also central. In this instance, not just the isolation of certain coastal towns in the west of Ireland but also the transient nature and seediness of ports and terminal ferries.

I’ve been bolting to Spain every winter since about 1999. As soon as the grey descends on the west of Ireland, I’m out of there. I tend to drift around a lot of little Spanish towns. That, in itself, is the best kind of research, because it doesn’t feel like research. When I went back to Algeciras recently, the area around the port had been cleared up a bit, which was a bit disappointing for my purposes, but the town is still a bit shady. I often write on location, so I did quite a bit of sitting in the ferry terminal with my notebook, scribbling a lot and probably looking a bit mad.

Dialogue is also an essential part of your writing. You have a keen ear for the rhythms and energy of Irish vernacular speech. It’s almost as if Charlie and Morris are thinking out loud.

Initially, I saw their banter as a kind of shield they were putting up around themselves. Then it came to me that they were in grief, because of what had inevitably happened to them along the way. If you live that kind of life, bad stuff is going to come to you. So then I started to feel warm to them despite their occupations. I also wanted to get that thread of menace that you often find in Harold Pinter’s writing. In The Birthday Party, for instance, you don’t even want to think about what the characters might have done, but you can sense it in their way of talking.

So you’re happy to go where your characters take you, rather than start with a fixed idea of who they are.

Yes, for me it’s kind of exciting when you can’t get a fix on your characters. Even now that the novel is finished, I still wonder with the two lads, how much is big talk, how much is their personas? So, there’s an ambiguity there which is interesting to me. They were vital characters to spend time with, sometimes scarily so. They were in the room with me, pushing me as I was writing, sometimes where I didn’t want to go.

I was intrigued by the female characters – Cynthia and Dilly, her daughter – both negotiating, in very different ways, this dangerous but lucrative macho world.

To be honest, they were more difficult to write initially. Dilly is of a generation that is completely unknowable to me – not even a millennial; beyond that. There are no scales over her eyes – she is very clear about what she grew up in – but she also has that strain in her, the wildness. Cynthia is more complicit, pulling the strings in this big criminal enterprise. It makes for an interesting family dynamic, and one from which Dilly is trying to escape.

In Beatlebone, you followed John Lennon into the deep west of Ireland, and there was this implied sense that the land itself – the elemental energy of the Atlantic coast – might cleanse his anxious soul. It is an almost unearthly presence in many of your stories.

I have a very strong feeling of time unfixed in certain landscapes in the west of Ireland. It’s like you’re tuning into the deep stuff when you go there. There are certain places, like the Ox Mountains, where I set an early story [Ox Mountain Death Song] where time as a chronological concept just does not apply. You might go up there at a certain time of the year and wouldn’t know where you are. People say that Ireland has changed rapidly, and it has, but the old weird Ireland is still out there.

In terms of influences, which novelists’ work do you most revisit?

I go back to Dermot Healy and John McGahern a lot. Healy’s last book, Long Time, No See, is very strange and underrated. McGahern, of course, is a master. I also go back to Saul Bellow – Herzog and Humboldt’s Gift, mainly – and to Don DeLillo just for a view of the mountain. Like everyone else, I’m waiting on the next Hilary Mantel. The two Thomas Cromwell books are masterpieces, and so incredibly contemporary.

And who are your favourite nonfiction writers?

Joan Didion is consistently brilliant. I recently read South and West, her previously unpublished essays, which was up there with everything else she has written. I also loved John Jeremiah Sullivan’s essay collection, Pulphead. There’s a great young Irish writer, Ian Maleney, whose essays, Minor Monuments, were published recently. It’s about growing up in a bog in Offaly and his grandfather’s dementia. He has amazing control for a young writer.

Which classic novel have you failed to finish reading?

There are a lot of embarrassing gaps in my reading, and, until recently, Flaubert’s Madame Bovary was one of them. I thought I’d better give it a go, so I spent three weeks struggling though the horrible thing and then I threw it at the wall. I know I am increasingly drawn to short-sharp-shock novels and that it’s difficult, because of that, to grapple with slower-paced books, but this wasn’t just slow, the pace was glacial. Basically, if you don’t have me in five or 10 pages, you can f**k off. – Guardian

Night Boat to Tangier is published by Canongate