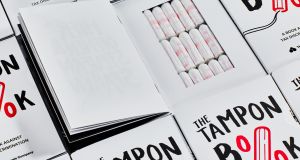 Open up a book and you can find a whole world. But the first book from the German startup The Female Company offers something more straightforward: within its covers are 15 tampons. And it is flying off the shelves.

The Tampon Book is a protest against Germany’s 19 per cent tax on tampons as “luxury goods” – and a way of getting round it. Books are taxed at 7 per cent in Germany, and so the founders of the Female Company, which sells organic sanitary products, decided to publish one and include tampons inside it.

Released earlier this spring, the first print-run sold out in a day and the second in a week, said the publisher, with around 10,000 copies sold to date. Only the English-language edition is currently available.

Co-founder Ann-Sophie Claus said she and her team came up with the idea for The Tampon Book after working for more than a year to raise awareness of the tampon tax and collecting more than 175,000 signatures for a petition calling on the government to reduce the levy.

“We realised that nothing will really change,” Claus said. “The German finance minister, Olaf Scholz, replied saying that he does not want to reduce the tax because he cannot ensure that companies will pass on the tax reduction to consumers anyway.”

According to Claus, The Tampon Book – priced at €3.11 – demonstrates that the company “will pass on the tax reduction to our customers”. One hundred copies have been sent to members of the Bundestag, Claus added, “which led to invitations from several parties”.

The book contains stories about menstruation from biblical times to the current era, as well as illustrations from Alica Läuger and Ana Curbelo.

“My characters are not only proud, confident women, unashamed of periods, but they are also posed in our relaxed natural state,” Curbelo said. “I want people to laugh at the characters’ uninhibited attitude and see themselves in the illustrations.”

“The history of menstruation has been full of rumours and suppression,” said Claus. “This is why the period became a taboo in the first place. But it seems like during the last years we, as women, are standing up against such myths . . . The tampon tax was decided in 1963: 499 men and only 36 women voted. It’s time that we question such decisions from a new perspective of modern, independent women.”

Tampons and sanitary towels are not subject to VAT in Ireland which has a zero rate treatment on women’s sanitary products. The Irish rate was implemented before EU legislation imposed reduced VAT rates on certain goods and services. This legislation has prevented other EU members, like the UK, from reducing their VAT rate on sanitary products to 0 per cent. Tampons are currently taxed at 5 per cent in the UK. – Guardian