Liz Pichon: Probably the most famous author you have never heard of

For the creator of the Tom Gates character, reader’s imagination is as important as her own in the books 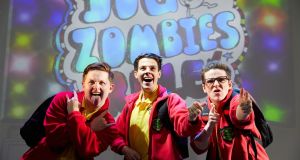 Pichon has been heavily involved in all aspects of the production, coming up with six original storylines for the two-act play

Liz Pichon is probably the most famous author you have never heard of. She has sold more than 4 million books since 2011 and featured in the Top 20 Most Borrowed Authors in Irish libraries in 2018. If her name is not familiar to you, the name of her beloved character Tom Gates might be, and if you have children under ten , you probably know him as well as any of their school friends.

10-year-old Tom is an ordinary sort of hero. He likes school, but prefers doodling to long division. He has a best-friend, an equally significant nemesis, and a teenage sister, who he will do anything to annoy. The first instalment of his adventures – The Brilliant World of Tom Gates – was published eight years ago, the title summing up his optimistic can-do attitude.

This year Pichon will publish the 16th title in the series, a remarkable achievement surely driven by the incidental, everyday nature of the plots. The books eschew conventional dramatic plots in favour of more quotidian exploits. As Pichon explains over the phone, from her studio in Brighton on sunny Sunday morning, “children are just busy being children. The big things that happen in their lives – missing out on a school trip, fighting with their sister – are the real drama of their lives.”

The ordinariness of Tom’s adventures are key to the series’ popularity.

Indeed, the ordinariness of Tom’s adventures are key to the series’ popularity. When the first Tom Gates appeared on bookshelves in 2011, Pottermania still had a grip on the publishing world and fantasy was the dominant mode. Like Jeff Kinney’s Diary of a Wimpy Kid series, Pichon’s socio-realist stories offered an accessible alternative to the more literary magic-driven genre, and this has proven particularly significant for reluctant readers.

The form of the books, meanwhile, is as important as the content to their accessibility and popularity. Presented diary-style in a school exercise book, the pages are filled with Tom’s doodles, complete with torn pages and water-smudged scrawls: Tom’s dog really does eat his homework. There are loose plots that bind each book together, of course, but just as important are Tom’s idiosyncratic sketches or the song lyrics he has written for his band, Dog Zombies.

Here’s a sample verse from School Dinner Blues: “When the bell goes for lunch, I’m just hoping and yearning for something that’s tasty and not stomach churning. I’ve got the school dinner blues and it’s making me sad, all the meals I wish that I’d never had.”

Music is particularly important to Tom, and the songs he writes – and the bands he idolises – all reflect Pichon’s own history with the music business. After graduating from London’s Camberwell School of Art, Pichon actually began her career in illustration as a designer with London’s Jive records, where she created the artwork for albums for Sam Fox, Ruby Turner and Billy Ocean, among others. It was at Jive that she met her music producer husband, Dubliner Mark Flannery, who has recorded versions of Tom’s songs for series’ superfans (of whom there are millions).

However, it is the visual appeal of the books that is paramount for Pichon. In fact, when Pichon first envisaged Tom’s story, it was in picture-book form. She had had been working as an illustrator for hire for several years when she first began creating her own work, but, despite success with titles like My Brother Boris, which won the prestigious Smarties Award, she yearned to work independently. After spending a year as a judge for that same prize, she became aware of a big gap in the children’s publishing market.

“Basically, you were supposed to go from reading these short, beautiful picture-books, where the illustrations were a key to the storytelling, to these long chapter books, with spare black and white illustrations at the start of every chapter, if you were lucky.”

With the Tom Gates books, Pichon “was interested in bringing all the kind of elements you might use in picture-books” to a story pitched at older readers. She started “experimenting with different fonts, space around the text, using the page itself to help to tell the story. I just started treating every page as though it was a piece of artwork.”

While she was writing, Pichon remembered the books she herself had loved as a child, in particular comics - “where the picture tells the story” - and the short silly verses of Spike Milligan. Indeed, the brevity of poetry was particularly appealing to Pichon because she herself struggled with reading as child. “I absolutely loved reading,” she explains, “but it always took me longer than everyone else, and I had to know something about the story in advance if I was to keep going with it, otherwise I would find it really difficult to plough through.”

Although she was never diagnosed with dyslexia, her son was, and she recognised in his difficulty a similar struggle. She was keen that her books would appeal to the reluctant reader. “Basically, I wanted to write a book that my nine- or ten-year-old self would have picked up. And the thing about these books is that kids who have trouble thinking of themselves as readers will get to the end of the book, and they won’t know it but they have actually read nearly 19,000 words!”

Sometimes, Pichon even leaves room for the reader to add their own doodles and annotations to her texts, and the latest instalment in the Tom Gates’ series, Tom Gates: Mega Make and Do (and Stories Too), invites the reader to participate directly in Tom’s half-term projects. The idea is to “provide room for the [READER’S]own creativity and to actively engage them.”

For Pichon, the reader’s imagination is as important to the ideas in the books as her own. Indeed, her Twitter feed is full of tributes to the creativity of her superfans, with pictures of their stories and art-work, which, like Pichon’s, is not limited to the page. Just as Pichon loves doodling with a Sharpie on her shoes (“if young readers are sitting on the floor at my feet, that’s literally all they can see of me”), so they love designing t-shirt tributes and logos for Tom’s band.

Pichon has been heavily involved in all aspects of the production, coming up with six original storylines for the two-act play

It was with this in mind that Pichon so eagerly signed on for the theatrical version of the Tom Gates universe by Birmingham Stage Company, which travels to Dublin in July. Pichon has been heavily involved in all aspects of the production, coming up with six original storylines for the two-act play, which has been co-written by director Neal Foster, as well as providing the artwork for Jackie Trousdale’s set and Simon Wainwright’s animated video design. Flannery has written the music for the show, as well, which allows Dog Zombie devotees access to the entire tween repertoire. As Tom would say, it’s time to get the biscuits ready.

Tom Gates Live on Stage is on in the Olympia Theatre from 3rd to 6th July. Tickets available from www.ticketmaster.ie.

Tom Gates: Mega Make and Do by Liz Pichon is published by Scholastic, and available now.

Narwhal: Unicorn of the Sea by Ben Clanton

Rabbit and Bear by Julian Gough

An unlikely friendship forms the basis of much of the humor in this series, which balances terse text with plenty of illustrations. A perfect first chapter book.

Popular comic series from Captain Underpants creator, about a police inspector who is half-dog/half-man.